Bollywood actress, Jacqueline Fernandez got trolled for her comment on cosmetic surgery at the 2006 Miss Universe Sri Lanka. Check it out!

Jacqueline Fernandez is one of the most beautiful actresses in Bollywood. Besides her career, Jacqueline often garnered attention for her personal life. Off lately, the actress has been in the news for her connection in the 200 crore money laundering case related to conman, Sukesh Chandrasekhar. For those who don't know, Jacqueline won the title of Miss Universe Sri Lanka in 2006. And recently, she got mercilessly trolled for her views on cosmetic surgery that she gave during the question round of the pageant.

It all started when a social media page shared a video clip of Jacqueline Fernandez from the question round of the Miss Universe Sri Lanka pageant. In the video, the actress can be seen expressing her views on cosmetic surgery. Jacqueline said that she believed it is an unfair advantage and goes against the concept of beauty pageants. She even mentioned that cosmetic surgery is also about who can afford it and who cannot. In her words:

Also Read: Kajol Recalls An Incident When Her Daughter, Nysa Devgan Was Stopped On Singapore Bus For Autograph

Soon after the video went viral, netizens started trolling the actress for her comments. They took a toll on Jacqueline for calling cosmetic surgery an "unfair advantage" as she has undergone several surgeries. One of the social media users wrote, "And then she herself forgot what she concerns she raised." Another commented, "Isn't she had lip job done post joining bollywood." One more troller questioned, "wat about the countless surgeries u have done to look good on screen??" 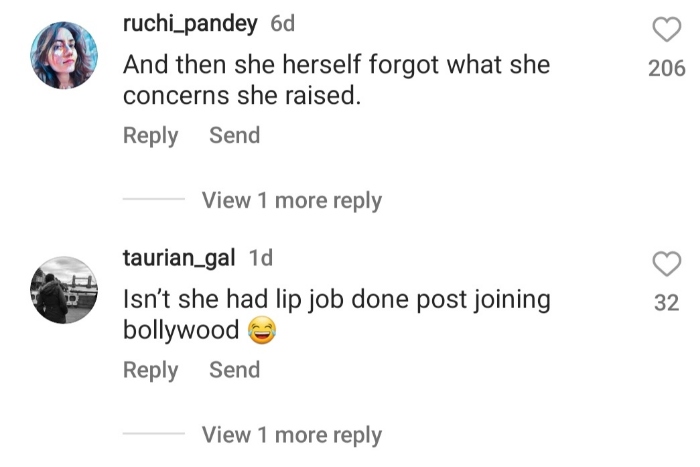 However, this is not the first time when the actress has got trolled. Earlier, on October 14, 2022, Jacqueline had attended an event in Mumbai after getting bail in the money laundering case. For the event, she donned a mustard yellow saree and looked beautiful. However, the netizens trolled the actress in the comment section for her alleged link with conman, Sukesh Chandrasekhar. One user had written, "Khale dhan wali safed heroine," another netizen had commented, “Isko wapas bhej do Sri Lanka.”

You May Like: Krishna Bhatt Says She Forced Fiance, Vedant To Go Down On Knees, Reveals When They Will Get Married

What are your thoughts on Jacqueline getting trolled for her comment on cosmetic surgery? Let us know!

Next Read: Yo Yo Honey Singh Is Dating Tina Thadani Within Months Of His Divorce, Twins With Her In Black