The wedding season has officially begun with Deepika Padukone and Ranveer Singh’s wedding. And now we are eagerly looking forward to the other couples, Priyanka Chopra-Nick Jonas and Isha Ambani-Anand Piramal exchange their wedding vows. After second-handedly witnessing the union of DeepVeer, the excitement increasing with each passing day for the other big weddings of 2018. (Also Read: Isha Ambani's In-Laws Gift Her A 450 Crore Bungalow To Start Her Married Life With Anand Piramal)

Isha Ambani and Anand Parimal's wedding has been the talk of the town ever since it was first announced with an official joint statement on October 30, 2018. It stated, “We are delighted to share that the marriage of Isha Ambani and Anand Piramal will take place in the residence of Shri Mukesh Ambani and Smt. Nita Ambani in Mumbai with family members and close friends on 12th December, 2018. The ceremonies will be performed in accordance with Indian traditions, customs and culture.”

It further stated, “During the weekend prior to the wedding, the Ambani and Piramal families will host their friends and family in Udaipur, where they are partnering with artisans and craftsmens to integrate local culture and traditions into the festivities. Both families seek the blessings and good wishes of everyone for Isha and Anand as they start their journey of togetherness. Nita and Mukesh Ambani Swati and Ajay Piramal”. And looks like, Isha and Anand’s pre-wedding festivities have started with a dandiya night ceremony with her grandma's blessings! The mother of the bride, Nita Ambani and the to-be bride herself, Isha were twinning in traditional Gujarati outfits with mirror and threadwork. Nita Ambani’s Chaniya Choli and Isha’s hand-embroidered floral lehenga was designed by Abu Jani Sandeep Khosla. Her polki necklace and matching maang teeka with crystal bangles surely would have bagged Mrs Ambani a plenty of compliments at the pre-wedding ceremony of her daughter. The elegant floral low bun accentuated her look. The bride-to-be wore something similar to her mommy, and the mother-daughter duo were twinning in their floral ensembles. Like her mother, Isha too complemented her outfit with a matching polki set. 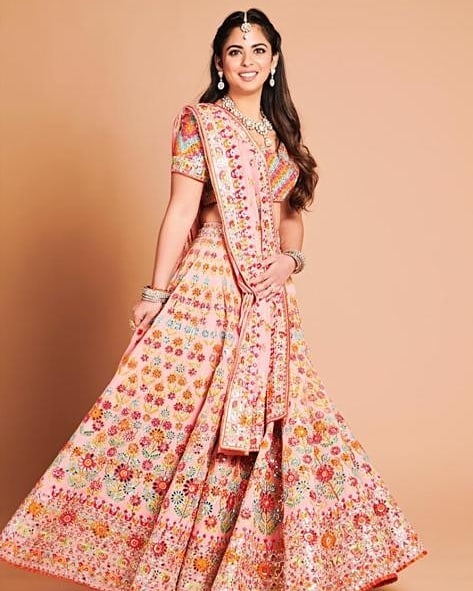 As per the reports, after living in the world’s second most expensive private residential property, Antilia, Isha Ambani will move into a swanky mansion with Anand Piramal post their wedding. This whopping 450 crore bungalow will be a wedding gift for the newly-weds from Ajay and Swati Piramal, who purchased it from Hindustan Unilever in 2012. Mukesh Ambani and Nita Ambani’s daughter, Isha will start her married life with Anand in a 50,000-square-foot sea-facing bungalow in Worli. 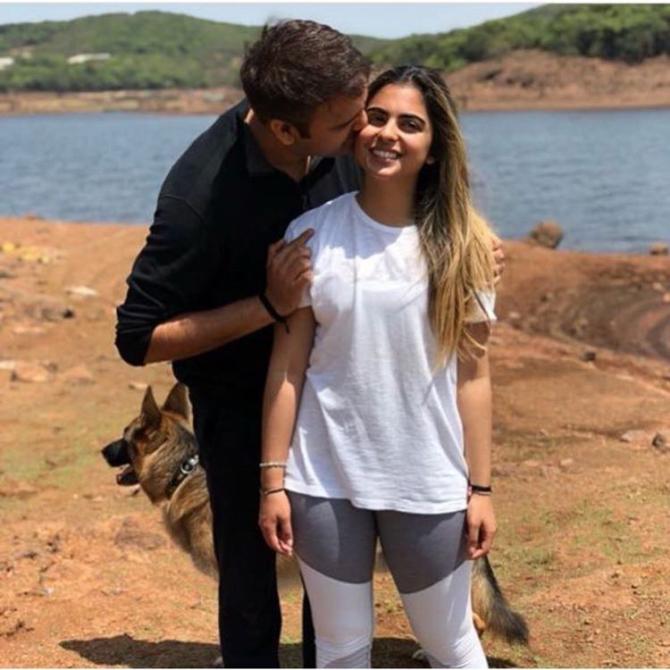 Before announcing Isha and Anand’s December wedding, Mukesh Ambani and Nita Ambani visited the Siddhivinayak Temple along with Isha’s younger brother, Anant Ambani and her dadi, Kokilaben Ambani. Following their tradition of starting something auspicious with the blessings of God, the Ambanis went to the temple to offer their prayers and present the first wedding invitation card of their daughter, Isha’s wedding with Anand.

Isha and Anand’s lavish wedding invitation card comprises of the itinerary of the wedding functions and it also contains a box embossed with golden embroidery, which once opened, plays the tune of the Gayatri Mantra. The card has a handwritten note by Isha paying an ode to her and Anand's grandparents. Their exquisite wedding invite has the initials of the bride and groom “IA” embossed on top of the box. While Isha and Anand’s wedding promises a lavish affair, their wedding card is reportedly worth Rs 3 lakh, as per a Hindustan Times report. (Also Read: One Day Cost Of Priyanka Chopra-Nick Jonas Wedding Venue Umaid Bhavan, Will Give You A Mini Attack) Isha Ambani and her mommy, Nita Ambani’s relationship is often listed under one of the most beautiful celebrity mommy-daughter duos. From twinning with their apparels on various occasions, ensuring that daughter Isha gets only the best, making stellar performances and killing the dance floor at her daughter’s wedding and also