Hina Khan and Rocky Jaiswal are the 'IT' couple of telly world. The two are often in news, and now, it is speculated that the two have secretly gotten engaged. Read on to know the truth! The popular serial, Yeh Rishta Kya Kehlata Hai, had played Cupid in the love story of Hina Khan and her boyfriend, Rocky Jaiswal. Hina had met Rocky on the sets of her debut serial, Yeh Rishta Kya Kehlata Hai, where he was the supervising producer. After sharing a great bond of friendship, Rocky had proposed Hina on national television in the Bigg Boss house and the two had decided to take their friendship to the next level. It’s been years now that the two are together and we are eagerly waiting for them to get married. However, now, we feel that our wish might be granted soon as Hina Khan flaunts a massive ring on her ring finger. (Also Read: Kareena's Pregnancy Glow And Baby Bump Is Alluring In The Photos From 'Laal Singh Chaddha' Set)

In August 2020, Hina Khan had hosted an 'Ask Me' session on her Twitter handle, wherein she had addressed her fans' questions. Amidst the fleet of questions and admirations, a fan had grabbed the opportunity to ask her about her love story with Rocky. A fan had asked the actress, "Mam I love Rocky sir, but who proposed first, you or Rocky Sir." To which, Hina had given an honest reply and had said, "No one to b very honest.. things just happened on its own." This is what true love looks like when every piece of your puzzle fits in without trying too hard. Now, it seems the couple is ready to take their relationship to next level and we cannot keep calm!

On September 30, 2020, Hina Khan took to her IG stories to talk about a hair straightener. While the actress was busy sharing her experience with the straightener, what caught our attention was the massive ring on her ring finger. The huge diamond ring was an intricate, gorgeous design, leaving us wondering if the ring was a gift from her beau, Rocky Jaiswal and if the couple is secretly engaged! We have totally drooled over her ring's design and cannot stop gushing over it. However, we just hope that this time the rumours of Hina and Rocky’s engagement come true. Take a look at her huge diamond ring below: 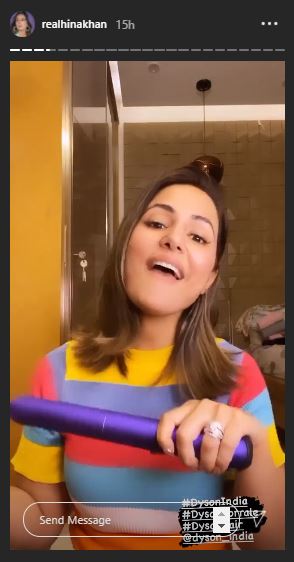 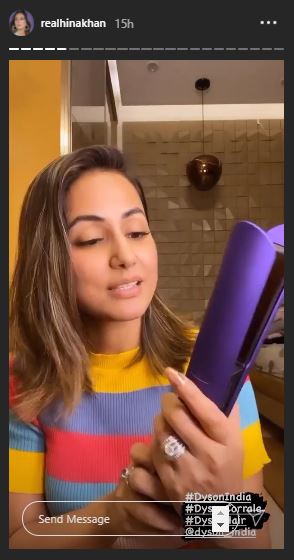 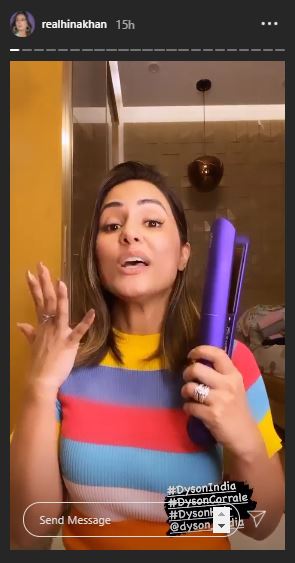 Rocky Jaiswal looks madly in love with Hina Khan and same is the case with her as they both never skip a chance to make each other’s day special. A glimpse of which we had seen on August 24, 2020 as taking to her IG stories, Hina Khan had shared a series of videos flaunting how her beau, Rocky Jaiswal had cooked daal, chawal and sabzi for her. Rocky had decorated the food with a cute smiley, which could melt anybody’s heart. When Hina had asked him, why he did all this for her, he had replied ‘I love you’ with hand gestures, and our hearts had melted then and there only. Hina had then shared a story with Rocky, where she could be seen kissing him and had placed an ‘I love you’ GIF atop it. (Recommended Read: Bella-Vienna Try To Hear The Heartbeat Of The Baby In Mom, Teejay's Tummy, Predict What's Inside)

Don’t we all want a man, who will brag about our achievements and support us in our professional path? Well, Hina Khan is lucky to have Rocky Jaiswal as her man. Hina is a woman of substance as wherever she goes, she glows and leaves an impression. Her strong presence can be easily felt in the room and her strong opinions can never go unnoticed. Her personality all together had made her top the Times most desirable women’s list and her beau, Rocky Jaiswal could not contain his happiness. Taking to his IG stories, Rocky had shared a post of Hina Khan being on the cover of various Times issues and had mentioned that she is his forever most desired. Sharing the picture, he had written, “Will be the most desired for me.. forever.. @realhinakhan” atop it. Sharing the same on her IG stories, Hina Khan had replied to him writing, “Awwwww love u my Rock” atop it. (Don't Miss: AIIMS Forensic Reports Suggest Sushant Singh Rajput Was Murdered, Dismiss The Possibility Of Suicide) 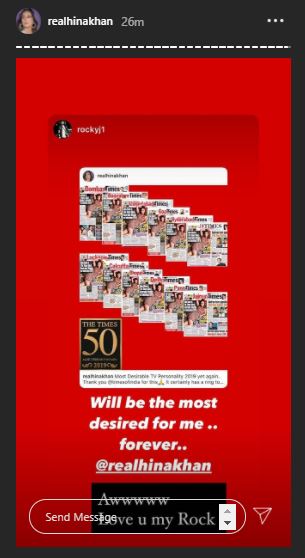 We are eagerly waiting for Hina Khan and Rocky Jaiwal’s wedding! What about you?