Riteish Deshmukh and Genelia Deshmukh took the opportunity to take their little ones, Riaan Deshmukh and Rahyl Deshmukh to the farm as the lockdown has been lifted. Genelia shares a video.

It has been almost three months since we have been following the protocol of the lockdown by staying at home to stay safe and avoid the spread of the pandemic. Initially, every parent had struggled to come up with different ideas to keep their kids busy and entertained at home but eventually, everyone got used to it and figured out ways to be engaged with what we have in the confined spaces of our house. From engaging them in in-house activities to home-schooling them, the celeb parents too, have given some amazing ideas when it comes to handling the kids. (Also Read: Kangana Ranaut Teaches 'Grumpy' Nephew Prithvi Raj Chandel How To Play Piano, Rangoli Shares A Video)

Just like Shilpa Shetty Kundra, Kareena Kapoor Khan, Soha Ali Khan, Neha Dhupia, Sushmita Sen, Sunny Leone and Mira Rajput Kapoor, Genelia Deshmukh too, have been updating her fans as to how her little bundles of joy, Riaan Deshmukh and Rahyl Deshmukh are doing in the lockdown. Riaan and Rahyl are the apples of the Deshmukh-D’Souza families’ eyes and it's commendable how the star couple has managed to keep their little ones away from the media glare. 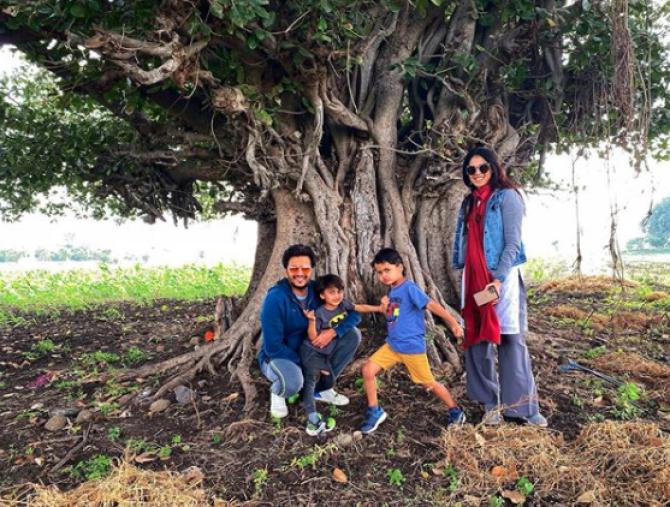 A while back, Genelia Deshmukh posted a video of her sons, Riaan Deshmukh and Rahyl Deshmukh studying in their new classroom and one glimpse of it, and you'll go green with envy, just like us, with how beautiful and relaxing it is. Genelia captioned the video as "Children are amazing and they adapt to everything but as parents and especially in these times, we are so lost.. We keep worrying, what world are we going to bring up our children in.. I had a city upbringing and Riteish had a both City & Rural. I envied him very often and then I thought I’d love to keep the kids as close to nature, animals as I can."

How Riteish Deshmukh and Genelia Deshmukh took the opportunity to take their little ones, Riaan Deshmukh and Rahyl Deshmukh to the farm as the lockdown has been lifted, the doting mother continued, "It’s been three months since lockdown and we have been away from Mumbai, living in our village... Now that the lockdown has been lifted, we got a chance to go to our farm... Our kids found a new classroom, they sit under a tree and read and write, and as a parent, I feel so satisfied to see this happen. I see them being more aware of their surroundings, more compassionate towards animals.. like someone rightfully said, “We don’t inherit the earth from our ancestors, we borrow it for our children”." (Also Read: Anupam Kher And Raju Kher's Mother Steals The Limelight As The Trio Dances On Trending Tune [VIDEO])

A few weeks ago, Genelia Deshmukh had revealed how Riaan Deshmukh and Rahyl Deshmukh have developed a liking for chess and hoping that the zeal to learn always stays with them, the star mommy had captioned her video as "We all know that kids can achieve anything they want to. Riaan and Rahyl are also exactly like that. And growing up, they are so curious, their questions, observations and responses make us wonder how fast they are growing up. And of all the things in the world, they’ve taken a liking to Chess! Activities like these help children build discipline & character and it makes me proud to see them pick up these skills early - with all the planning, strategies and even competitive spirit! They are so focused, so intent on learning everything about Chess that they just get lost in their own world! I hope this zeal to learn stays with them forever, as it will take them far. These experiences we give our children today will open up a world of possibilities for them tomorrow."

To announce the arrival of Rahyl Deshmukh, Riteish Deshmukh had tweeted a super-cute picture of his firstborn, Riaan Deshmukh and had written, “Hey guys! My Aai and Baba just gifted me with a little brother. Now all my toys are his…- Love Riaan.” Riteish, in a 2016 interview with the HT, had spoken about the bond that his two boys, Riaan and Rahyl share. Riteish had remarked, “Riaan absolutely dotes on him. It is good to see that kind of bonding. Sometimes, when I look at them, it makes me wonder if I was like that as a kid?” To mark Children’s Day 2018, Genelia Deshmukh had penned how her little ones had made her life worth. Posting a family picture, Genelia had written, “Dearest Riaan and Rahyl... Happy Children’s day ... My Life is you 2 and I’m glad I keep it so simple because I Love every single minute that we spend together and I promise you that no matter who you meet in Life I Will still be that person who loves you the most.. I know that’s what all mum’s say, I’m just glad I got blessed to say it to you.. Thank You for making my Life worth it #childrenarethebest #heartandsoul #allmine.” (Also Read: Mira Rajput Kapoor Wishes Sister, Noor On Her Birthday, Calls Her The 'Coolest Cat' Of Rajput Family)

Isn’t the outdoor classroom at their farm outing such an amazing experience for the kids? Much love to Riaan and Rahyl!