Rangoli Chandel posted a video of Kangana Ranaut giving music lessons to little Prithvi Raj Chandel but he is in a grumpy mood. The video seems to be from the griha pravesh day of their new home.

Becoming a mother and embracing motherhood is a blissful moment for every woman, but becoming a maasi is an equally joyous feeling. When your sister calls or you visit her house, even before greeting her you ask/look for the little ones. You cherish the experiences you have with your niece/nephew, capture every moment with them and want to be the forever good cop in the relationship. Just how maasi literally means maa-si (just like a mother), she holds an equally important place in the little one's life and cares for them like their mother. Kangana Ranaut aces her role of a maasi to her nephew, Prithvi Raj Chandel. (Also Read: Mira Rajput Kapoor Wishes Sister, Noor On Her Birthday, Calls Her The 'Coolest Cat' Of Rajput Family)

Kangana Ranaut was the happiest when her sister, Rangoli Chandel had embraced motherhood with the arrival of a baby boy, whom they named Prithvi Raj Chandel. It was on November 14, 2017, when Kangana became a maasi and a few months later, Rangoli had posted a picture of the aunt-nephew duo. Posting a picture of Kangana giving a sweet peck on her nephew, Prithvi's cheeks as he had flashed his brightest smile, Rangoli had written, “Massi and kiddie!!!!” 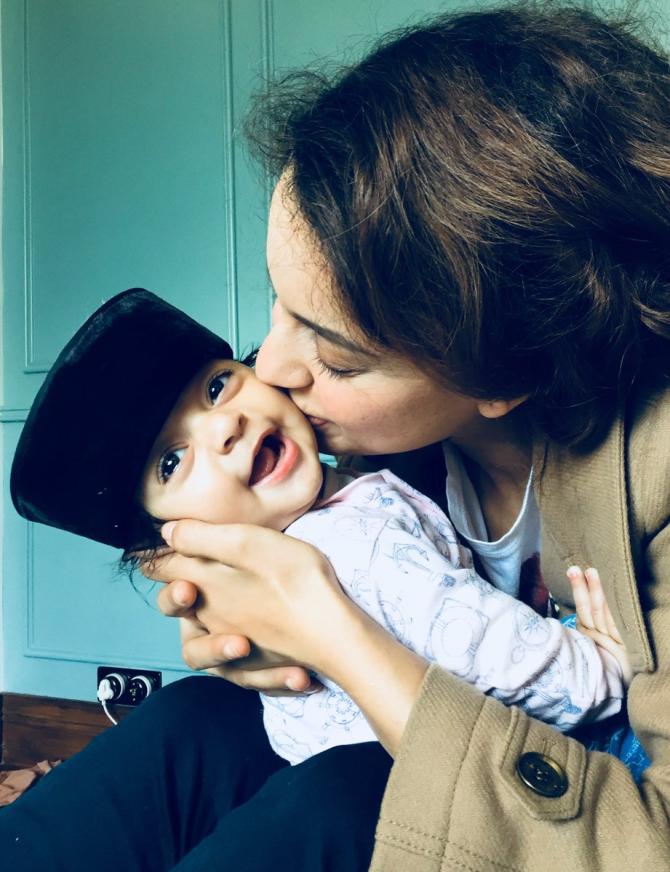 Since then, Kangana Ranaut has been the little one's go-to person, his friend, mentor, guide, teacher and his official babysitter. Rangoli Chandel often takes to her IG handle to post pictures and videos of the maasi-nephew duo. Sometime back, Rangoli posted a video of Kangana giving music lessons to little Prithvi but he is in a grumpy mood. Rangoli captioned the video as "Throwback to a grumpy day when Prithvi wanted music lessons from maasi but in no mood to click pics #memories #family." The video seems to be from the griha pravesh day of the Chandel family in their new home.

A few days back, Kangana Ranaut had made the headlines for the house she had designed for her sister, Rangoli Chandel in Kullu, Himachal Pradesh. Kangana, who is a vocal advocate for sustainable fashion and Khadi, had designed her sister’s home by sourcing materials from the domestic market. And Kangana had made sure to get everything perfect for her nephew, Prithvi’s room and balcony. Rangoli had given a glimpse of his balcony and had written, "Maasi accessorised Prithu’s balcony in a way that he is not ready to come out of it!!!" (Also Read: Anupam Kher And Raju Kher's Mother Steals The Limelight As The Trio Dances On Trending Tune [VIDEO]) Kangana Ranaut had made sure to make her nephew, Prithvi Raj Chandel’s first steps inside the new house, special and had welcomed him with 'aarti, pooja and of course halwa'. Sharing the pictures, Rangoli had written, “Prithu’s maasi is an expert in making every little occasion in to a celebration.... when little Prithvi came home for the first time he was welcomed with aarti, Pooja and of course halwa.” 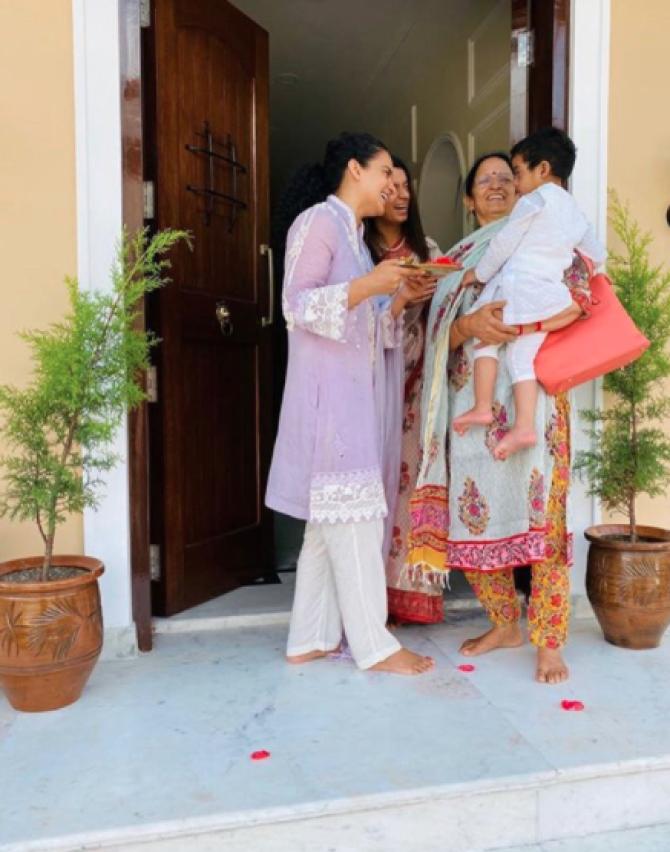 Rangoli Chandel, in an interview with Pinkvilla, had spoken about her sister, Kangana Ranaut’s exceptional efforts in designing the room of their little bundle of joy, Prithvi Raj Chandel. Elaborating on the same, Rangoli had remarked, “Kangana designed it with a lot of colour and accessories. It has alphabets, planets and a lot of other things. Instead of installing a TV, Kangana chose to put Swami Vivekananda’s portrait because she wants him to get curious about Yoga and Sadhanas. It also has cartoons and games for him to enjoy. She also put up a swing for him in his balcony.” During a media interaction before the screening of her film, Panga, Kangana Ranaut had revealed that her sister, Rangoli Chandel was worried that media might think Prithvi Raj Chandel is not her baby. Kangana had elaborated, "When my sister gave birth to her child, she sent me a few pictures and she is like, ‘I want to post them.’ I said, ‘You’re on the hospital bed and they have cut you open. Why do you want to post it?’ She is like, ‘Because tomorrow, they will say that this is not my child. Looking at the media, I am 100 per cent sure they will say this. Ek toh he is so white and like you, they will say isne yahaan transfer kar diya'. She is like, ‘Yeh mera bachcha lag hi nahi raha. People will say iska hi hoga, isne isko de diya. We are constantly living in a certain fear ki kaun kahaan se humein kya bol dega." (Also Read: Kapil Sharma Cuddling His Daughter, Anayra Sharma In His Arms Proves She Is Her Daddy's Little Angel) Kangana and Prithvi are the cutest maasi-nephew duo of B-town!