Mira Rajput Kapoor's sister, Noor Wadhwani turns a year older and her doting baby sister posted an array of pictures to wish her, expressing how Noor is the coolest cat in the Rajput family.

If you are the eldest of the siblings, you must be the second mother of the house. The youngest one enjoys the most pampering and there are no rules and regulations when it comes to them. And the middle one is sandwiched between the elder and younger one. But looks like it was different in the Rajput household as the middle sibling, Noor Wadhwani enjoyed being the centre of attention, in who's shadow her elder sister, Priya Tulshan and younger one, Mira Rajput Kapoor looked lousier. (Also Read: Mira Kapoor Posts An Unseen Picture With Her Girl Gang, Her Lehenga Is A Perfect Summer Wedding Pick)

Shahid Kapoor's wife, Mira Rajput Kapoor is a super-fortunate girl, who is blessed to have not one but two lovely sisters, Priya Tulshan and Noor Wadhwani. With the striking resemblance between the Rajput sisters, it is always a treat to see Priya, Noor and Mira in one frame. Mira, time and again, shares glimpses of her sibling life with her sisters and expresses how much they mean to her. On International Day of Yoga, Mira had posted a picture with her long-distance yoga buddy, Noor as they both attempted headstand. Mira had captioned the screenshot of their digital yoga session as "Hello from the other side! Headstand with my long-distance yoga buddy @noor.wadhwani! #HappyYogaDay #yogaeveryday."

On June 23, 2020, Mira Rajput Kapoor's sister, Noor Wadhwani turned a year older and her doting baby sister posted an array of pictures to wish her. Expressing how Noor is the coolest cat in the Rajput family and hoping to be 'weird together forever', Mira captioned her birthday post as "Happy Birthday the coolest cat in our fam, the favourite child, and the one in who’s shadow we all look all the more lousy. Everyone loves you the most. You know it! The middle child who gets all the attention! Let’s be weird together forever! Thanks for always having my back and being so unconditional with your love and shade. Love you loads." June 23, also marks to be the wedding anniversary of her eldest sister, Priya Tulshan and to wish her, Mira took to her IG stories to post pictures of her didi and jiju. 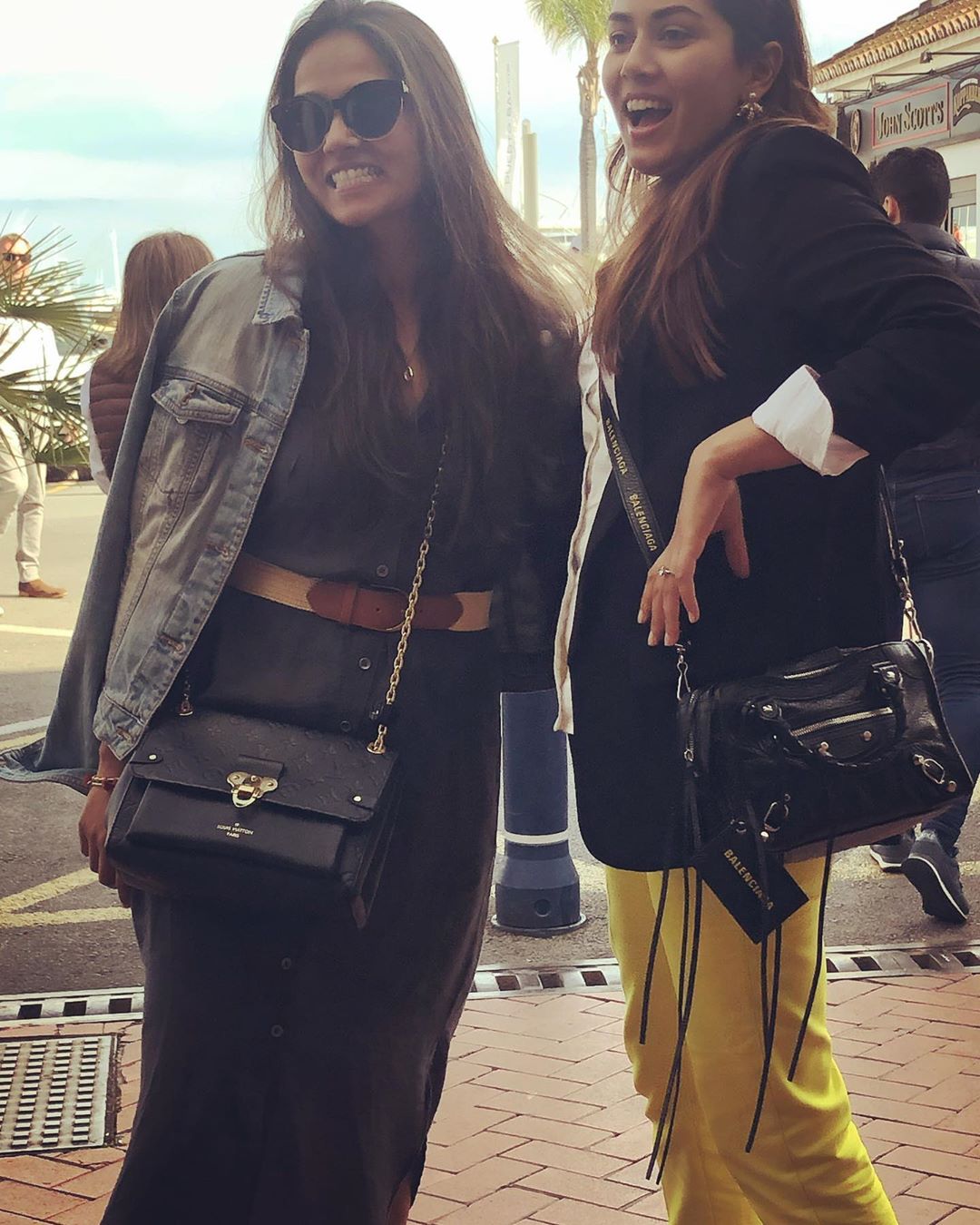 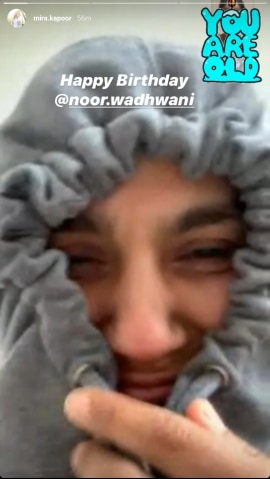 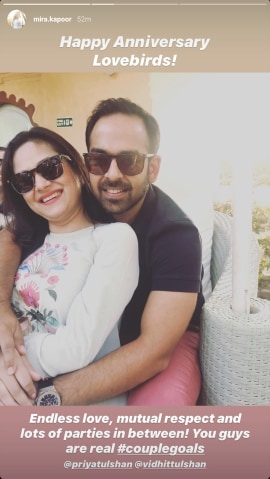 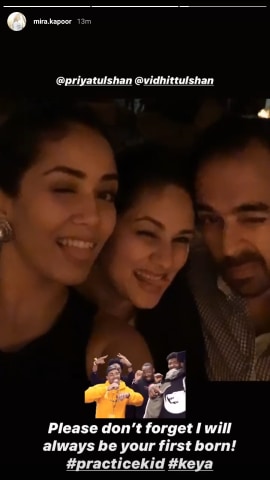 Last year, on Noor Wadhwani's birthday, Mira Rajput Kapoor had posted a selfie with her sister as they had twinned in white. Thanking her for being the official referee between their eldest sister, Priya Tulshan and her, Mira had written, "Happy birthday to the one that validates sanity in our gene pool. Thank you for always being there, no matter what; across time, place and headspace. (And for being official referee between @priyatulshan and me). You are beautiful inside-out. You’re the one we all look up to. Love you so so much #sistersister #missyouallthetime." (Also Read: Shahid Kapoor Treats Wife Mira Kapoor With 'Best Pasta' As He Cooks For The First Time In Five Years)

Shahid Kapoor's office in Mumbai is designed by his wife, Mira Rajput Kapoor's sister, Noor Wadhwani. Sharing the picture of Shahid’s ‘office-meeting-vanity pod-call-it-what-you-want’ space and explaining the details how the idea was implemented, Noor had written, “Three years ago, over a couple of FaceTime sessions with my younger sister, we designed this rental ‘office-meeting-vanity pod-call-it-what-you-want’ space. I shared a few ideas and some super rough sketches from across the globe and she executed on the ground in Mumbai.” 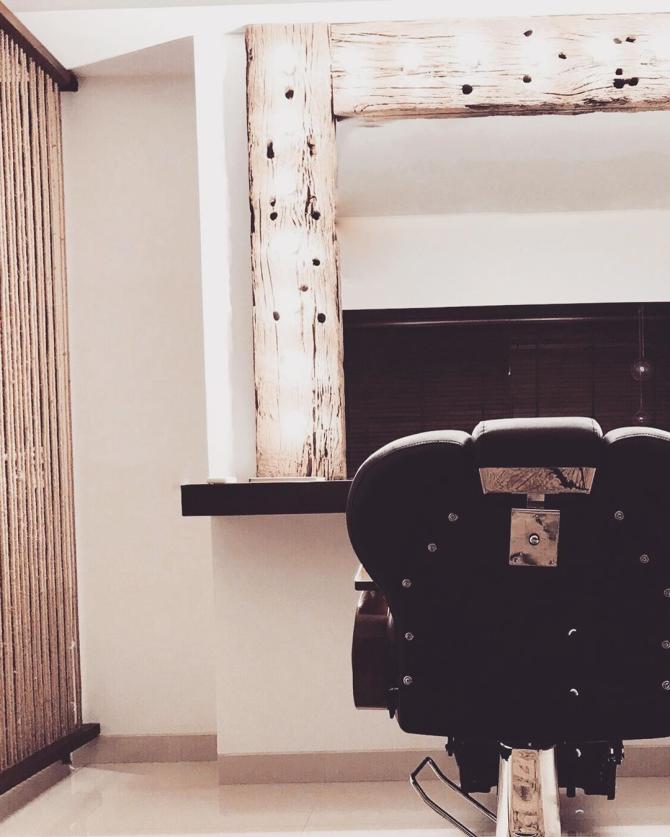 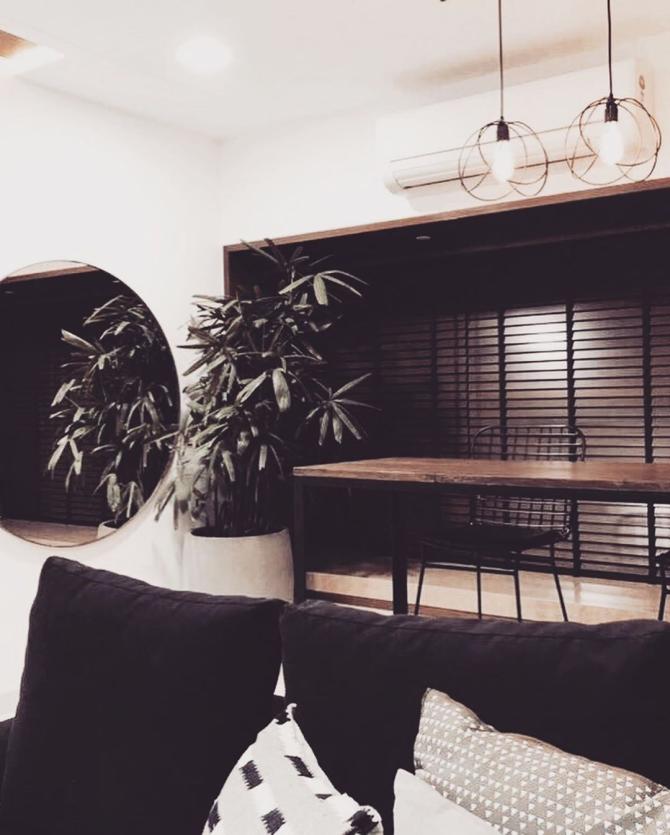 Revealing why she hadn't posted the pictures before, the designer Noor Wadhwani had continued, “I never really shared it coz I kept waiting to make a trip back to India to style and photograph it certain way. That trip didn’t happen and the iPhone pictures faded back into the cameraroll. I waited for that trip back, for that perfect time, the perfect picture, that perfect light, and while I waited, the moment passed. Of course in the grand scheme of things, with everything going on in the world right now, the pictures are quite insignificant. The fact that I can’t just hop on a plane back to India, that I don’t know when next I may be able to give a hug to my parents and sisters, and the realization that we just never know what tomorrow holds, to seize the moment- that, couldn’t be clearer. Virtual hug to my fambam back home #seizethemoment #dontwait #crappyiphonespicsforthewin #flashbackfriday.” In December 2019, the Rajput sisters had reunited for the U2 concert in Mumbai. Mira Rajput Kapoor had made heads turn with her concert-perfect outfit as she had attended the concert with her sisters, Priya Tulshan and Noor Wadhwani. Mira had opted for a pair of black jeans and a green-and-black checkered-top with her half hair tied up. Mira had accentuated her simple-yet-voguish look with chunky bracelets, earrings, a thin stroke of eyeliner and tinted cheeks. Mira’s pictures with her sisters, Noor and Priya from their U2 concert night out will remind you of your girl gang. Mira had shared some IG stories and had posted one picture on the social media platform, which she had captioned as “You can’t sit with us.” (Also Read: Shahid Kapoor Enjoys A Meal In Beas As Mira Kapoor Keeps An Eye On Misha, Zain Who're Running Around) 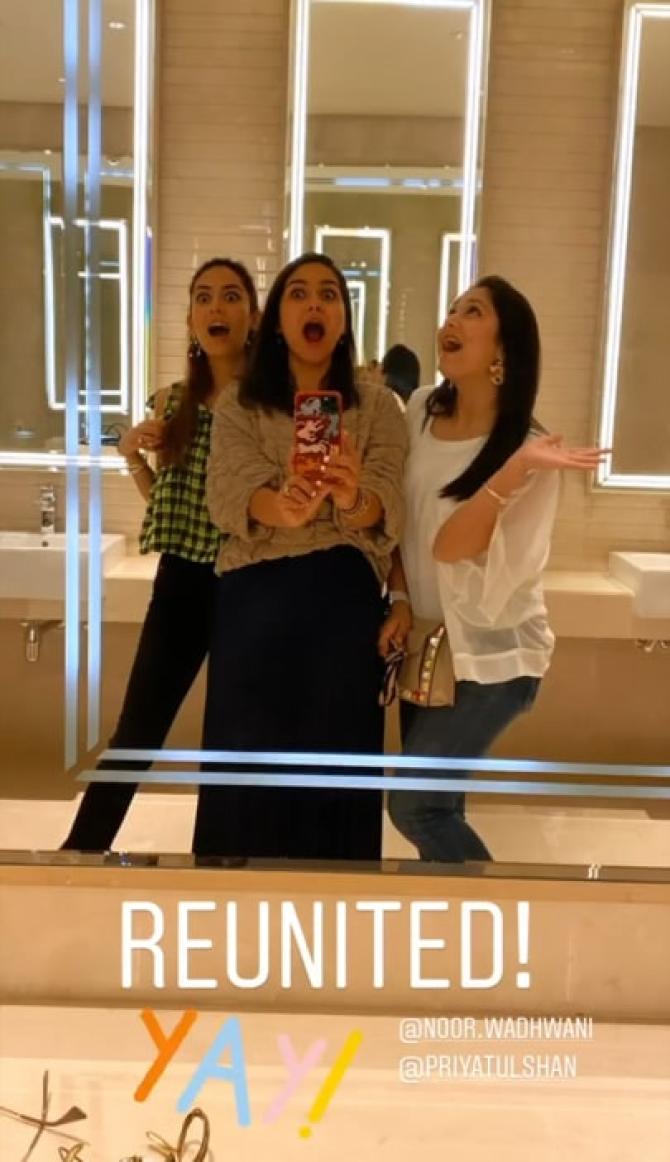 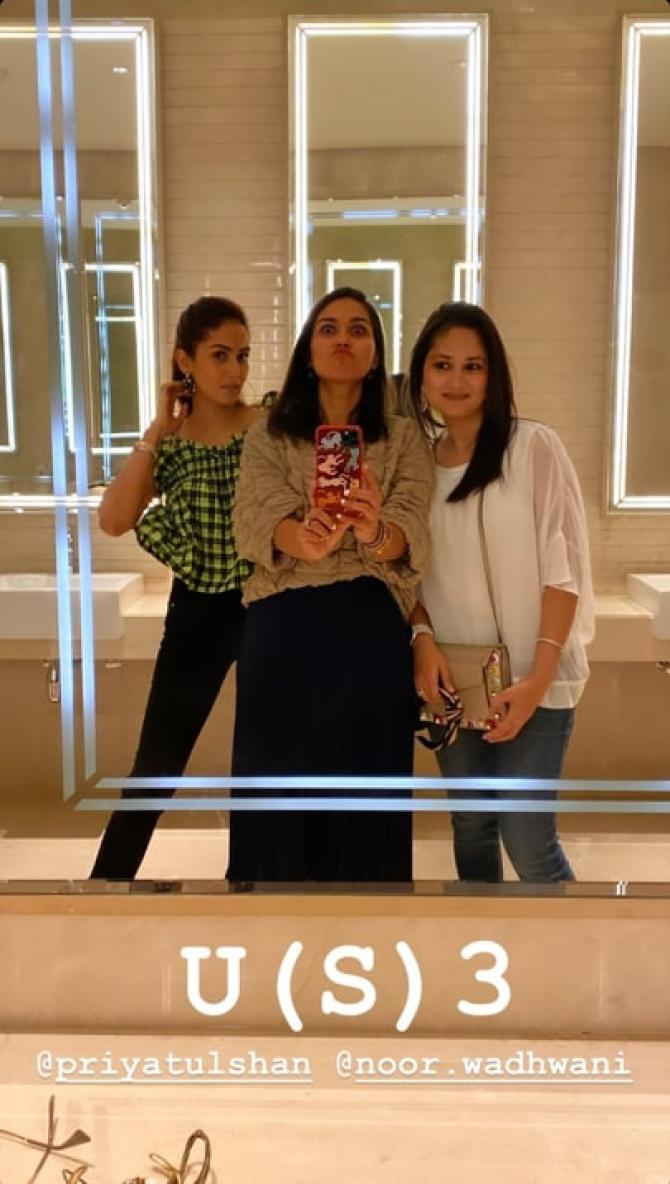