'Bigg Boss 7' winner, Gauahar Khan is rumoured to be dating Zaid Darbar, and looks like they are all set to take their relationship to the next level. Find out more below!

The moment you enter the world of glam and glitz, everyone gets interested in your 'relationship status'. The rumours and linkups are inevitable parts of the celebrity life. They can hate it or love it, but they simply cannot ignore it. The media mills keep an eye on 'who is dating whom' and 'who is taking the plunge'. And looks like Bigg Boss 7 winner, Gauahar Khan is the next in line to change her relationship status from 'single' to 'committed'. Well, that's what her social media feed hints at! (Recommend Read: Richa Chadha Reminisces The Time When Her 'Main Man', Ali Fazal Made Her Heart Swell With Pride)

For quite sometime, Gauahar Khan is rumoured to be dating Zaid Darbar. We remember when Gauahar had celebrated her birthday, it was Zaid, who was the guest of honour and had made her day super special by just being there. Zaid had shared pictures from Gauahar's special day, and we spotted the duo twinning in blue. Alongside it, he had written, "So I guess it's never too much blue with us! I wish I could type everything right here but I'd rather keep it small & express in front of you. You know what you mean to me G, happiest birthday Gau-ahar-jeous." 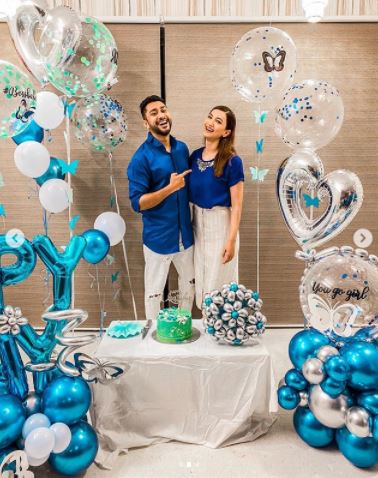 Ever since Zaid has featured on Gauahar's Instagram feed, fans are curious to know whether they are dating or not, but they chose to not address the question. However, looks like they are all set to take their relationship to the next level, or that's what it looks like. On September 3, 2020, we spotted Gauahar and Zaid dancing on Neha Kakkar's latest musical, Diamond Da Challa. While their chemistry swooned their fans, towards the end everyone rejoiced as Zaid went down on his knees and slided a ring on Gauahar's finger. The actress captioned the video as "Ye hai Gaane ka asar YA mann ki baat? Jaldi Batao. #GaJa killing it. #DropYourLove Sshhh!" Check it out below:

On August 25, 2020, Gauahar had done a live chat session on her Instagram and t was also joined by her rumoured beau, Zaid. In the video, we could see Gauahar cutting a cake, and later she was joined by Zaid and had asked him the burning question, "Why do people need a tag or a relationship status?" To this, Zaid had said, "Because they love us. So they want to know each and everything." To this, Gauahar had said, "It's fine guys. You can keep guessing. Some things are personal. As long as you see two people or four people or more happy, it's fine. Let's not judge or put a tag. Let's enjoy and spread happiness." (Also Read: Tara Sutaria Receives Hearts From Beau, Aadar Jain's Cousin, Riddhima Kapoor Sahni On Her Picture)

For the unintiated, Gauahar Khan's rumoured beau, Zaid Darbar's sister, Anam Darbar had also wished the gorgeous actress on her birthday and had twinned with her in blue and white. Anam had shared pictures with her and had written, “Go shawty, it’s your birthday! Haaappyyy Birthdaaaaay to the Sweetest, Loveliest & to the purest soul. You’re amazing just the way you are! It’s your Birthday. YAYY! hope you have an amazing one! May Allah bless you! Loveeeee you, G." (Don't Miss: Aparshakti Khurana Spends Quality Time With His Wife Aakriti And Nephew Virajveer On Family Vacation) Well, we wonder if it was was an actual proposal or 'gaane ka asar'?