The glam world is filled with pros and cons, and sometimes, theÃ‚Â rumours and speculations take a toll on their personal space. Some hide their relationship, and some walk hand in hand and confess their love openly. However, most of them deny the rumours at first but acceptÃ‚Â them later after taking their time. One such couple that is leading all the headlines is Tara Sutaria and Aadar Jain. The couple has been spotted on numerous occasions and most recently at Aadar's big brother, Armaan Jain's wedding. (Recommended Read:Ã‚Â Dilip Kumar's Brother, Ehsan Khan Dies Within A Month After Younger Brother, Aslam Khan's Demise)

Since then, we are seeing these two lovebirds showering compliments on each other's Instagram posts and stories. However, this time around, it's Aadar Jain's cousin, Riddhima Kapoor Sahni, who has come forward to showcase the great bond that she shares with Tara Sutaria. Scroll down to take a look! On September 2, 2020, popular actress, Tara Sutaria took to her Instagram handle and posted a pouty face selfie with her sister, Pia Sutaria. In the selfie, the doting sisters are looking stunning, while Tara's pout is simply perfect, Pia's gorgeous smile wins our hearts. Well, Tara's boyfriend, Aadar Jain's cousin, Riddhima Kapoor Sahni has dropped some hearts in the comments section of this picture. And, no wonder it tells us about the friendly bond that Tara shares with most of the family members of the Kapoor clan. Take a look. (Don't Miss:Ã‚Â Twinkle Khanna Watches Mom, Dimple Kapadia's Hollywood Debut, 'Tenet' In Theater, Shares Her Review) 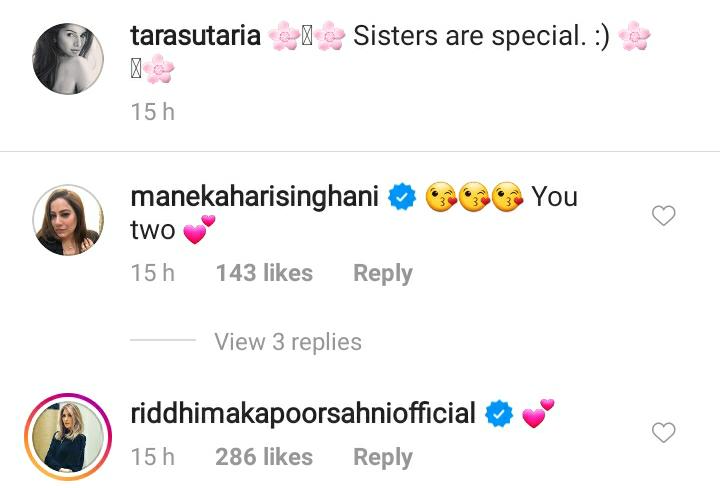 For the uninitiated, back in December 2019, Tara Sutaria and Aadar Jain had attended a U2 concert in Mumbai and more than their presence at the concert together, it was the Aadar's caption on one of his Instagram stories that had caught everyone's attention. Aadar had taken to his Instagram stories and had posted a video from the concert and had written, "When I am with you @TaraSutaria." Tara had also posted the same video on her Instagram story and had written, "Always with you" and also drew a heart around it. Take a look: Well, Aadar Jain also shares a great bond with Tara's BFF, Shraddha Inder Mehta and they've shown it a couple of times in their social media banters. For instance, On April 26, 2020, Tara Sutaria had taken to her Instagram handle and had shared a stunning picture with her best friend, Shraddha Inder Mehta. In the picture, Tara could be seen twinning with her best friend in blue as the two ladies had looked gorgeous in their respective outfits. Along with this gorgeous picture, Tara had written a sweet one-line caption that could be read as "(T)winning Happy days with the BFF." However, what had caught everyone's attention was the cute comment from Tara's beau, Aadar Jain that could be read as "@missmehtaaa Ohh really! I hear Bajaj onyx is popping right now." Take a look: 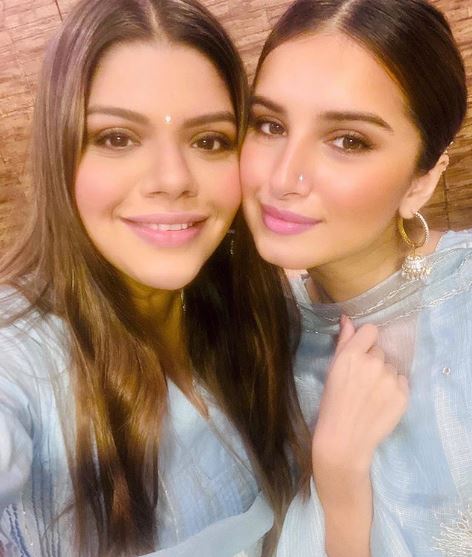 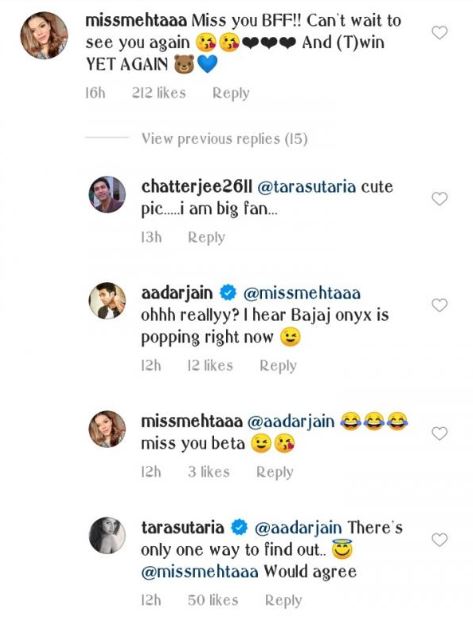 Even Adar Jain's mother, Rima Jain in a conversation with the Mumbai Mirror had revealed that she's open and supports Aadar's choice in terms of his relationship with a girl and will welcome any girl. She had said, "We love anybody our son loves." However, Rima had also clarified that as for now they aren't thinking about his wedding and had stated "No, nothing like that. They're young. We'll see later in life what happens. Let them make their life and let them work." (Also Read:Ã‚Â Aamna Sharif Celebrates Her Son, Arain's Fifth Birthday, Hubby Amit Kapoor Shares Celebration Pics) 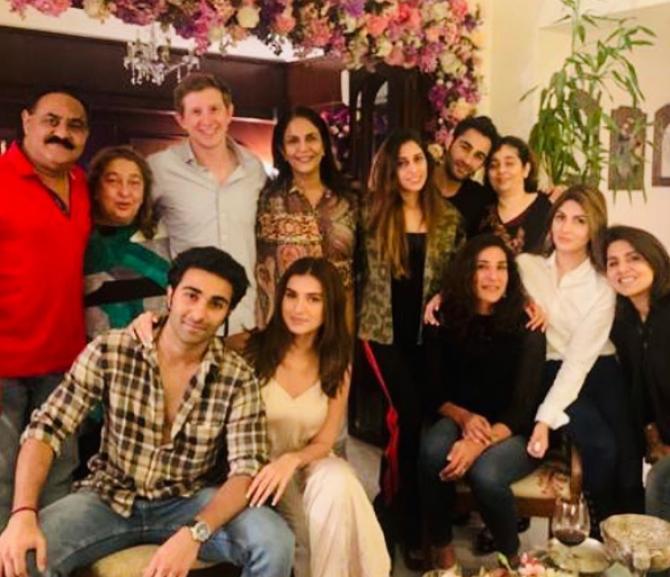 DidÃ‚Â you like Tara and Pia's adorable selfie? Let us know!