Parth Samthaan and Erica Jennifer Fernandes attended Ekta Kapoor’s birthday bash in Mumbai and stole the limelight away as soon as they entered the party together, twinning in blue! 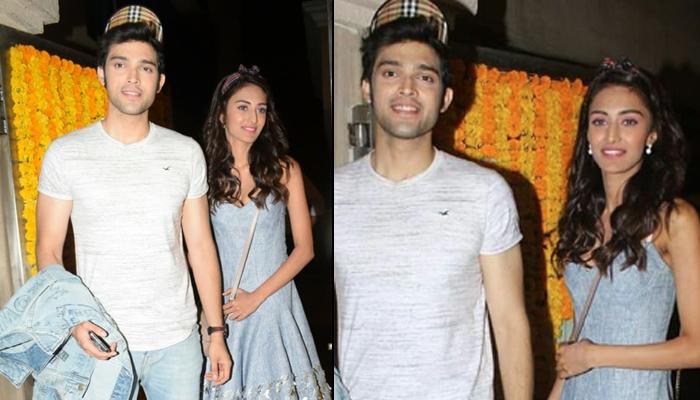 Chahat Ke Safar Mein, Dilon Ke Hosle Dekho, Yeh Aksar Toot Jaate Hain, Kabhi Aansu Bahate Hain, Kabhi Chalte Hain Sehra Mein, Phir Bhi Mushkurate Hain, Imtehaan Har Ghadi Ki, Kasautii Zindagi Ki… Parth Samthaan and Erica Jennifer Fernandes had all our hearts when the red dupatta slipped off and the big reveal was made that they will be the protagonists of Kasautii Zindagii Kay remake. Amidst the unrequited love story of Anurag and Prerna, Cupid decided to strike Parth and Erica too, with his arrow of romance. (Also Read: Sameera Reddy Shuns Trolls In An Epic Way Who Fat-Shamed Her For Flaunting Baby Bump On Her Babymoon)

Kuch Rang Pyaar Ke Aise Bhi fame, Erica Jennifer Fernandes and Kaisi Yeh Yaariaan fame, Parth Samthaan have become a household name with their on-screen chemistry but their fans are rooting for them as a real-life couple too, courtesy their off-screen bond. From vacationing together to taking care of each other on sets, Parth and Erica’s off-screen camaraderie gave a spark to their dating rumours. Now, it’s difficult to find Parth and Erica without each other by their side at any showbiz event or special occasions.

On June 7, 2019, Kasautii Zindagii Kay 2 producer, Ekta Kapoor celebrated her 44th birthday and had hosted a bash for her family and friends at her residence. On her birthday, messages started pouring in for the television diva and her dear friends, Parth Samthaan and Erica Jennifer Fernandes too had posted lovely wishes for her. While Erica had written, “On this very day we are celebrating you in our lives Wishing you a very very happy birthday @ektaravikapoor and may you be flooded with a lot more love, happiness and success.”, Parth had captioned his post as, “Only picture I could find Happyyyyy birthdayyyyyy @ektaravikapoor maam... Hope you have an amazing year with all the happiness and health”.

Parth Samthaan and Erica Jennifer Fernandes attended Ekta Kapoor’s birthday bash in Mumbai and stole the limelight away as soon as they entered the party, together! Twinning in blue, Erica and Parth together were a treat to eyes and they were all smiles for the cameras. Erica looked like a doll in a blue dress and Parth looked dapper in a white shirt with ripped jeans and a denim jacket. But what was super-adorable in their look was while Parth donned a checkered cap with his OOTN, Erica carried a checkered headband to go with her outfit. (Also Read: Malaika Arora Trolled For Wearing Saree Like A 'Sanskari Bahu' At Sonam Kapoor Ahuja's Birthday Bash)

On May 7, 2019, Erica Jennifer Fernandes had celebrated her 26th birthday with her rumoured beau, Parth Samthaan. Erica and Parth took two days off and had flown to Mussoorie to celebrate former’s birthday. Erica and Parth had also taken a videographer to shoot their travelogue and their pictures from the vacation are proof that they both are more than ‘just friends’. When Erica had cut her birthday cake, Parth smeared it on her face and they both seemed happy in each other's company.

Speaking about Parth Samthaan and Erica Jennifer Fernandes’ apparent dating spree, The Tribune had earlier quoted a source as saying, “Parth and Erica have been inseparable and are always together. They both arrive on the set together and wait for each other’s pack-up to leave together. They are very fond of each other and clicked since the day they met. Parth is always in Erica’s make-up room and they find their way to each other even in between shots. Parth also went to meet Erica’s family and they seem to adore him.”

Later, Erica Jennifer Fernandes, in an interview with the Hindustan Times had shunned all dating rumours and had blurted out the truth. She was quoted as saying, “It is news to me that such rumours are out there. But, I guess, rumours are a part and parcel of the entertainment industry. I have known Parth since we started working together on our TV show and we shoot every day. We are good friends and have a great working relationship. Whenever we chill together, we have a whole bunch of people with us. When we go for events, we are often leaving from our set, so yes, we do leave together. That doesn’t mean we go home together. In fact, we live in different parts of the city.” (Also Read: Anushka Sharma Praises Virat Kohli's Gesture Of Asking Fans Not To Shout 'Cheater' At Steve Smith)

Don’t they make for one super-stylish couple? Keep us posted!