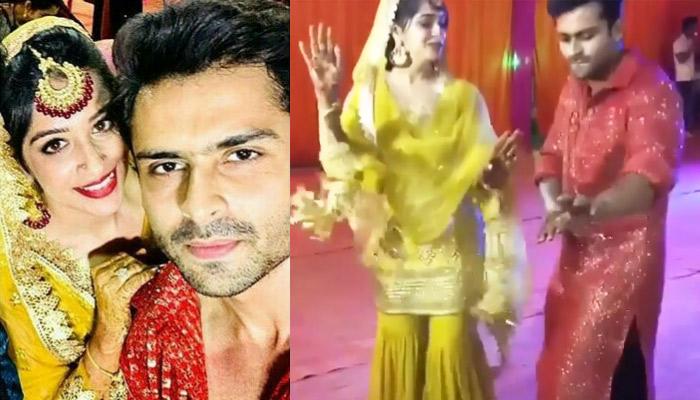 The sweet little moments that a celeb couple spends with each other during their pre-wedding functions catches all the attention. Be it some romantic moment or sharing some thumkas together, it not just makes the day special for the guests but it also creates an everlasting memory. And guess what, our much-in-love couple from the telly town is pro at doing it. Yes, we are talking about soon-to-be-married Sasural Simar Ka fame couple, Dipika Kakar and Shoaib Ibrahim.

Even though the couple planned their wedding to be a secret affair, the photos and videos from their pre-wedding functions are spreading like fire and creating buzz all around. And why not? After all, they are totally killing it with their beautiful haldi and mehendi pictures. Not just that, we got our hands on another romantic video which is totally hatke. Their sangeet ceremony was held last night (February 21, 2018). The cutesy couple was seen performing on the dance track Chal Pyaar Karegi from the film Jab Pyaar Kisise Hota Hai. And what made their dance performance really exciting was when the line of the song said Hum Tujhko Uthakar Le Jaenge, Doli Mein Bithakar Le Jaenge, what our romantic groom-to-be did is what every girl wishes from her partner. He actually lifted Dipika in his arms and recreated that filmy scene from the movie. The romantic couple also danced on the number Sun Mere Humsafar from the film Badrinath Ki Dulhaniya and there is no denial about the fact that they look madly in love with each other. Check out the adorable videos here:

Seems like Shoaib is pro at romancing and that is seen often in his pictures and videos. No doubt, Dipika is looking ravishing in her yellow-coloured sharara dress while her groom-to-be is equally complementing her in maroon shimmering kurta paired with black pyjama. Recently, we told you about their cute clip from their mehendi ceremony, where Dipika is getting henna applied on her hands and Shoaib is sharing some sweet dance moves on the track Sajan Ji Ghar Aaye from the film, Kuch Kuch Hota Hai. In case you missed the attractive video, check it out here. 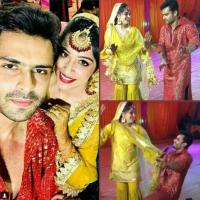 Aren't these two giving major couple goals? They both look like the happiest couple and the simplicity of their looks justifies their love tale so well. Seeing the videos, it is also noticed that the excited dulha shared some dance moves not just with his dulhan but also shaked legs with other family members too. Shoaib's way to showcase his pyaar for Dipika doesn't end here. He even got Dipika's name written on his palm with the henna and was seen flaunting it. Isn't that cute? What else a bride wishes from her partner, right? 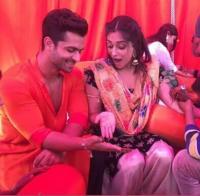 Shoaika, as fondly called by their fans, are all set to tie the knot today, February 22, 2018. They planned their destination wedding in Bhopal to stay away from the media glare as they wanted their D-day to be a private affair. Hence, only their close friends and relatives are invited to the wedding. Post the nikah, the couple will give a grand reception in Sea Princess Hotel, Mumbai on February 26, 2018, for their industry friends. For the unfamiliar ones, the couple met on the sets of Sasural Simar Ka and since then, their love has been growing by leaps and bounds. They even performed as a couple on the reality show Nach Baliye 8. And on the same show, Shoaib proposed the love of his life. That precious moment was not just priceless for the couple but was very emotional as well.

We cannot wait to see them as Mr and Mrs and become happily married couple!