Deepika Padukone And Ranveer Singh Accused Of Misbehaving With A Fan, DeepVeer Fans Speak For Them

Deepika Padukone And Ranveer Singh Accused Of Misbehaving With A Fan, DeepVeer Fans Speak For Them

One of the most adorable couples of B-town, Deepika Padukone and Ranveer Singh are riding high on their professional career, as well as personal lives. Apparently, this much-in-love couple will get hitched on November 10, 2018, and we can’t keep calm! And news about this lovely couple makes it to the headlines in no time. (Also Read: Deepika Padukone And Ranveer Singh Spotted Walking Hand-In-Hand At Disneyland, Video Inside)

Recently, we updated you that Deepika and Ranveer are on a vacation, ahead of their winter wedding. A fan spotted them walking hand-in-hand and twinning in white tees at Disneyland in Orlando, USA. This soon-to-be-married couple was accompanied by Deepika’s sister and Ranveer’s future sister-in-law, Anisha Padukone. The video that went viral on social media, a fan asked the couple, “Hiii, do you think we can get a picture?” Check out the video:

The video of Ranveer and Deepika, walking hand-in-hand in the USA, was made by their fan Zainab Khan. Now the catch here is that Zainab assued the couple of being rude to her. One of the Bollywood photographers posted the video on social media, on which, Zainab commented, “I was the one who was attacked I made this video! Such disrespectful actors! They lost a fan and their self-respect." She further wrote, "They attacked me! Both of them. Disgusting ass people! Fame got to their head."

But soon, DeepVeer (as fans fondly call Deepika and Ranveer) fans slammed her for intruding the couple’s privacy and making a video of them. One of the fans wrote, "You're looking for attention you're disrespectful for recording people and uploading a video of them without their consent! Just cause they're famous we don't have to step on them." Another Insta user commented, "@zainabnkhan_ first of all how rude are you for intruding like that, recording them first then asking for a pic the cheek! and when they politely asked you to stop you are now spreading hating on them. Girl learn some manners and show some respect. Actors are humans too. Not your private property." (Also Read: Akshay Kumar Trolls Wifey Twinkle Khanna Over Her Career Switch, Details Inside) 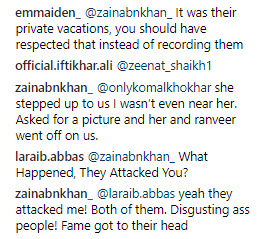 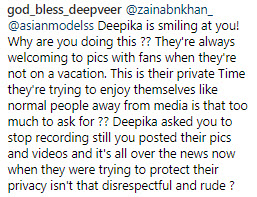 Deepika and Ranveer have neither denied or accepted their wedding rumours, but in a media interaction, Bollywood's Bajirao was quoted as saying, “It is the function of speculation – to exist. Nothing is official till it is made official and I am not a seer. I cannot say this will happen on this date in the future. Right now, we are both extremely busy working. Besides, she is also recuperating from back problems. So, we are quite occupied and distracted. So, if there is any announcement in the future, you will be hearing me shouting from the rooftops.” (Also Read: Abhishek Bachchan's Epic Reply To A Troll Who Mocked Him For Living With His Parents)

On the other hand, his Mastani talked about the same and informed, “When it is time, I’ll know that it is the right time. I think as an institution, it is extremely important. That’s the way I have been brought up. It is extremely important for me to see myself like that. It is every girl’s dream. I have always followed my instinct and I know that I will feel it when I am ready and when it’s meant to happen.” Speaking of the camaraderie they share, Deepika stated, “When we’re with each other, we don’t need anything or anyone else. We’re comfortable in each other’s presence. Sometimes it’s intelligent conversation, sometimes just silence, sometimes there’s a childlike innocence and it’s about being playful. We keep each other grounded. We’re very good in that sense.” With regards to their wedding, a source was quoted as saying, “The whole team has been asked not to take any leaves during that period. From the make-up artist to her manager and even her team of publicists have been requested to be available for the wedding.” It was further reported, “Both Ranveer and Deepika are extremely private and do not wish to have a lavish wedding with a long guest list. The ceremony will be away from the media glare, classy and intimate, with only family and close friends in attendance. That’s the plan”. (Also Read: Hina Khan Shuts Down A Troll Who Said Boyfriend Rocky Jaiswal Is Not Good-Looking For Her) 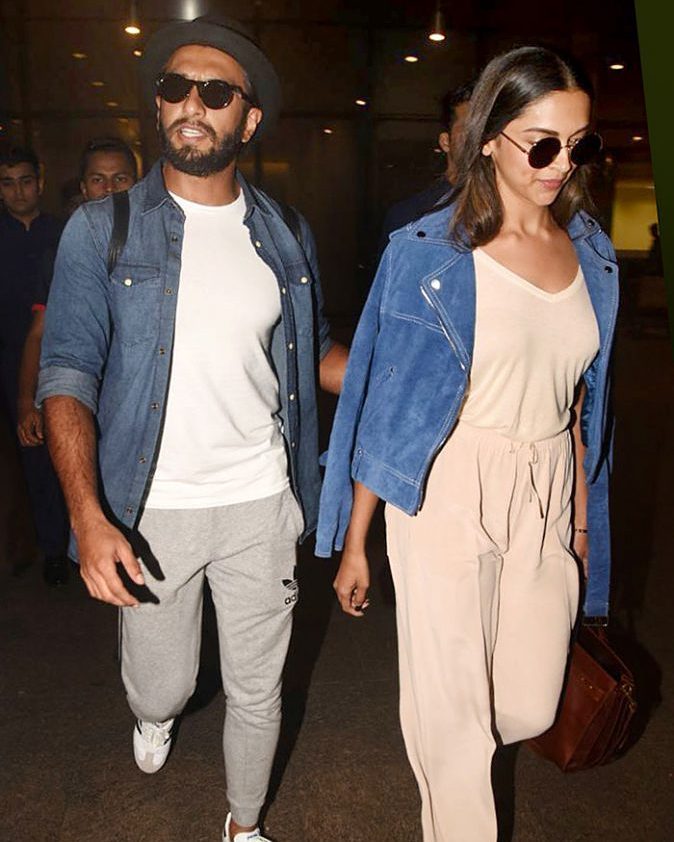 What do you think after watching the video? Did Deepika Padukone and Ranveer Singh misbehaved with their fan or it was just their fan's publicity stunt? Do share your views in the comments section below! 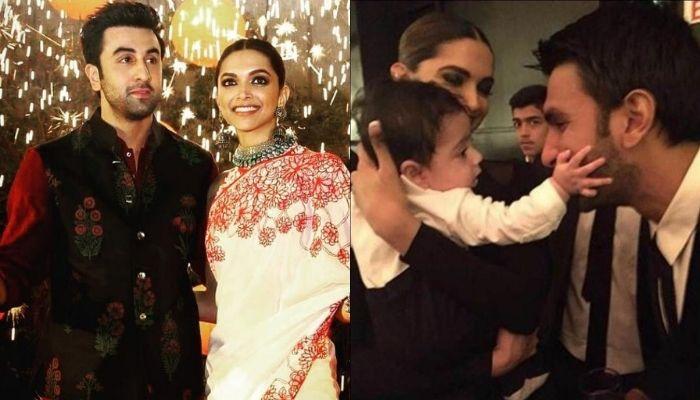 Some relationships are too perfect to find forever! Deepika Padukone and Ranbir Kapoor’s relationship was of a similar sort as even now their bond and chemistry make us go ‘hayeee’. Though the two had an ugly breakup, gradually, they let the bygones be bygones and share a great bond together.