When we talk of prominent Bollywood couples, whose name pops up in your mind? Apart from many others, the super-stylish couple, Akshay Kumar and Twinkle Khanna is sure to cross your mind, isn’t it? Theirs is a beautiful love story and every move and cutesy PDA filled activities of the couple is enough to make us say, ‘oh so cute’! (Also Read: The Super-Romantic Love Story Of Bollywood's 'Khiladi' Akshay Kumar And Twinkle Khanna)

Also, Twinkle, being the witty person that she is ensures that she always takes a dig at her superstar hubby, every now and then. Be it in interviews and appearances, both make us drool over their chemistry and super-fun nature. To give you an example, at a throwback Koffee with Karan chat, Karan Johar had asked Twinkle about the one thing that Akshay has, which no other hero possesses. To which, Mrs Funnybones had replied, “A few extra inches (pauses)…vertically.” Isn’t it hilarious? 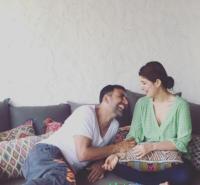 But this time, the Khiladi too ensured that the world sees his wittier side as well and that he doesn’t miss an opportunity to take a dig at his beautiful wifey. In an interview on a chat show with Rajeev Masand for CNN, Akshay was asked about what he felt on Twinkle’s career switch. To which Akshay hysterically replied back with a, “Yes, looking at the 14 films what she has done, writing has been her best decision”! Isn’t it extremely funny? Looks like sangat ka asar has actually worked for Akshay (*wink wink*)! (Don't Miss: Akshay And Twinkle's Luxurious Seaside Home Overlooks Arabian Sea And Even Has Pond In Living Room)

However, that was all about the trolling part. Akshay further went on to talk about his wife’s love for books. He revealed about his wife’s love for books was there ever since he had known her. He shared, “I still remember when I was doing films with her before the shot was ready and the lighting was done, she used to just have a book and she used to keep on reading. There was a fruit plate beside her and she used to finish the entire fruit plate and keep on reading. She used to read one novel a day,” (Do Read: Ranbir Kapoor Clicks Girlfriend Alia Bhatt, Mommy Neetu Kapoor Gives Her Approval)

Whenever Akshay is asked about Twinkle, he is all praises for his wifey. In an interview with Filmfare, the Housefull actor revealed how his wife has been a constant source of inspiration and support system for him. He had stated, “Twinkle has not only added to my wardrobe but also to my bank balance. I was a scattered person; she is the one who has put me together. After marriage, she has kind of raised me (Laughs). On a serious note, whenever I’ve broken down she’s given me emotional support.” 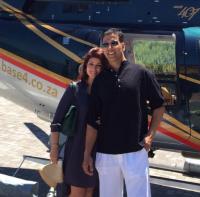 And at another interview with HT, he had shared, “Tina (Twinkle) is my best friend. My wife is the best person any man could wish to wake up next to. She holds me up when I’m falling, and puts me down when I’m flying. She makes me laugh when I’m sad, and moans when I am sitting idle. Tina is everything for me. She is my reality check."

The Mela star is also no less when it comes to praising her hubby. In an interview, she once shared the support that she received from her hubby when she wanted to shift her career. She had stated, “He really believes in my capabilities as a person and that gave me a lot of confidence to switch jobs. Even today, if I do something new, he ensures he is a part of it. For instance, I have been writing a weekly column in a newspaper since a year now (the interview was conducted in September 2014), but he still reads all my pieces before I submit them.” (Also Checkout! Here Is Why Akshay And Raveena Never Got Married To Each Other, Even After A Secret Engagement)

Isn’t it wonderful? Akshay and Twinkle, you make for a wonderful couple! Keep taking more of such fun digs and make us drool over your chemistry.