The Chef Bride Donned A Yellow Embroidered 'Lehenga' From Designer, Jayanti Reddy On Her Wedding

The Chef Bride Donned A Yellow Embroidered 'Lehenga' From Designer, Jayanti Reddy On Her Wedding

Our chef bride, Vidushi Sharma nailed every look of her different wedding functions, giving us a feel that millennial brides surely know how to steal the show.

Imagine a situation where you know a boy for years, and spend every other day laughing, fighting, travelling, and debating about everything trivial, with him. And when you are 25 or 26-year-old, you fall in love with that idiot and then decide to marry him. In such a case, you don’t feel the butterflies initially. However, later, you fall in love from head to heels and realise that he is your soulmate. The same thing happened with our couple of the week, Vidushi Sharma and Viren Khuller as they commenced their new journey from being best friends to better together.

Recommended read: The Bride Who, Donned A Unique Ivory Sabyasachi 'Lehenga' For Her Wedding

After being best friends for a long period, Vidushi Sharma and Viren Khuller had decided to marry each other. Our bride of the week, Vidushi had donned a yellow lehenga with intricate embroidery work on it, to shine on her D-day. Her outfit was from the house of the renowned designer, Jayanti Reddy. She had completed her look with minimal makeup and stone-studded jewellery. The chef bride wore a unique yellow coloured lehenga, which was heavily embroidered in silver floral patterns, along with a matching semi-sleeved blouse. The outfit has broad golden-sequenced borders attached at the ends. Vidushi draped two dupattas with her outfit, a cream-coloured dupatta on her shoulder and a peach one over her head. She completed her look with heavy jewellery which had included a maang teeka, nath, earrings, a neckpiece and a heavy stone studded choker. The bride looked extremely elegant as she donned golden and green coloured bangles along with kaleere in her hands. Her hairstylist, Deepak Sheshodiya had tied her hair in a bun and had adorned it with beautiful white flowers. Her makeup artist, Akriti Raj Chitkara had given her a eyes soft golden touch with thick eye-liner and had given her a glam look with nude lips. In contrast, the groom, Viren Khuller wore a subtle creamish-white sherwani, along with an orange pagdi. 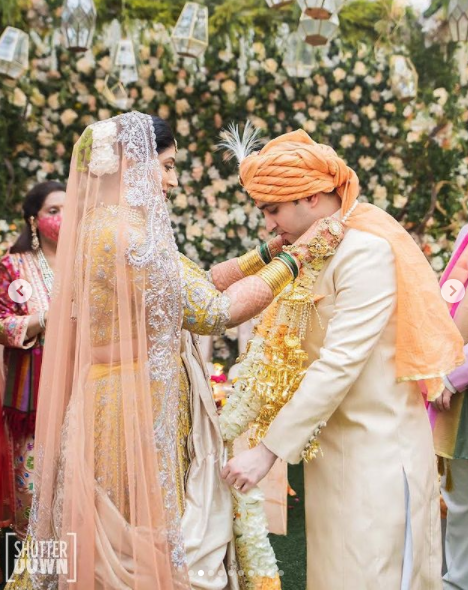 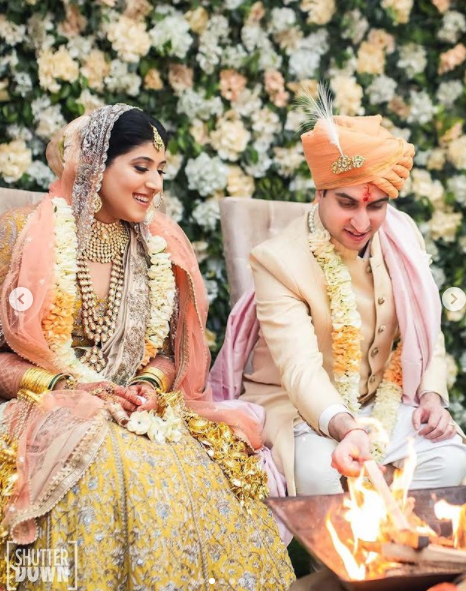 For her haldi ceremony, Vidushi had opted for a yellow outfit. With a heavily embellished Kurti, she had paired up a matching sharara and wore pink and white floral jewellery with it. Her makeup artist had given her open tresses with minimal makeup and nude lips. Vidushi had completed her look with a yellow and white tie-dye dupatta and black sunglasses.

For her mehendi ceremony, Vidushi had worn a gorgeous ensemble from the ace designer, Anita Dongre. The designer had opted for a sky blue lehenga with intricate embroidery all over it and a Fuschia coloured embroidered blouse. She had completed her look with a fuchsia net dupatta and matching jewellery. Her golden and emerald jewellery included a maang teeka, a neckpiece and a pair of earrings.

For her tresses, her hairstylist, Deepak Sheshodiya had given her soft curls and her makeup artist, Emelda Lepcha Tamta, had given her subtle makeup look. On the other hand, the groom had worn a pink kurta and white pyjama, paired with a matching Nehru jacket.

The couple had looked picture-perfect as they smiled for the team of photographers from Shutterdown Photography. The floral decor at the backdrop of the main stage was a sight to behold at the day wedding of Vidushi Sharma and Viren Khuller. 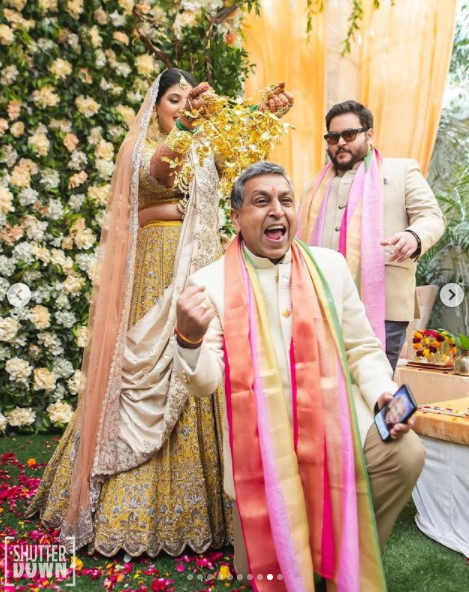 We hope that the brides-to-be have taken notes for elegant ensembles for their upcoming wedding functions!

You may also like: This Bride Aced Royal Marwari Look In A Unique Lehenga For Her Destination Wedding In Jaipur