Neha Dhupia and Angad Bedi are a power couple and the entire tinsel town is attending Neha’s baby shower party today (September 20, 2018). The two got married in a secret Gurudwara wedding on May 10, 2018, and almost two months later, on August 24, 2018, they gave the world the happiest news of Neha’s pregnancy. (Also Read: Pregnant Neha Dhupia Looks Gorgeous In Her White Dress During Her Baby Shower, Pictures Inside)

And today, hubby Angad has organised a baby shower party for Neha and who's who of Bollywood has started to arrive at the venue. Preity Zinta, Karan Johar, Arbaaz Khan with his girlfriend Giorgia Andriani, Soha Ali Khan with hubby Kunal Kemmu, Zaheer Khan with wifey Sagarika Ghatge, married couple Kabir Khan and Mini Mathur, among others have arrived. Take a look at celebrities arriving at Neha Dhupia’s baby shower:

A while ago, we told you that the star couple, Angad and Neha themselves arrived at the venue and they looked stunning together. Neha slew it with simplicity in her white dress and Angad opted for a formal blue blazer. Looking at their pictures, we could sense that Angad couldn’t help but constantly look at Neha’s pretty face. Take a look:

Just yesterday (September 29, 2018), we brought to you the story that Angad is planning to throw a surprise baby shower party for his preggy wife, Neha. It was reported, “Angad Bedi will be throwing a grand baby shower for his wife Neha Dhupia this weekend in Mumbai. In order to make the occasion special, he has flown down her parents and has also invited all her friends from the Fashion and Film industry. Not only this Angad, to make it even more remarkable, but he has also handpicked menu of everything she likes”.

On August 24, 2018, sharing the following pictures, Neha and Angad announced that the two would soon become three. Angad wrote, “Ha! Turns out this rumor is true. #3ofus #satnamwaheguru”, and Neha beautifully captioned these pics as, “Here’s to new beginnings #3ofUs #satnamwaheguru”. (You May Like: Esha Deol Enjoys Backstage Fun With Her Baby Girl, Radhya Takhtani Before On-Stage Dance Ballet)

After their May wedding, the two had released a joint statement about their marriage which could be read as, “Marrying your best friend is one of the greatest feelings in the world, and we are extremely fortunate to have found love in each other. It has been a beautiful journey knowing each other and after formalizing the wedding earlier this year, today, we exchanged our vows in a beautifully simple, private and intimate Anand Karaj ceremony in Delhi. We look forward to celebrating and sharing this special moment with our friends and colleagues in Mumbai in the next couple of weeks. Thank you for showering us with so much love. Your blessings have truly made this day so much more special”.

Post their marriage, rumours were rife that the reason behind their hush-hush marriage was that Neha was pregnant. On this Angad had then said, “If someone wants to say something, I am not here to comment on anybody's statement. Everybody has a right to their opinion, I feel whenever we want to make anything public, we will as a couple- whether it's our personal front or professional work- whatever we want to share, we will willingly come forward and do that”.

He had further added, “We shared our wedding pictures but if we want to keep it private then that's how it will be done. It's not that we hid anything from anybody, we tweeted ourselves. There are certain calls that we should make as a couple and there are certain things as a family we want to keep private, we will keep private”. (Suggested Read: Inaaya Naumi Kemmu's Jungle-Themed First Birthday Cake Has Toy Elephants, Tigers, Birds And Trees) 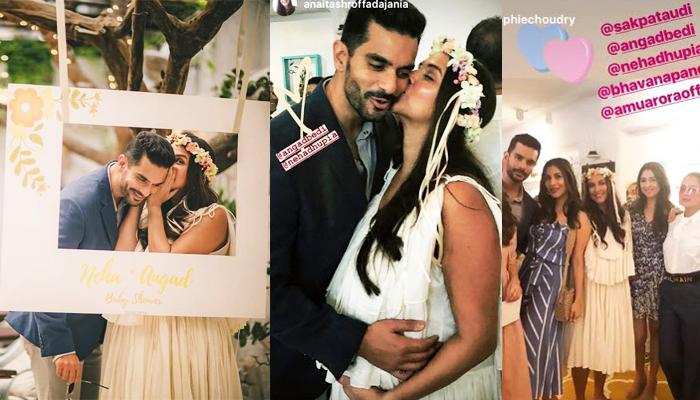