Setting the screen ablaze with some of their memorable roles, these Bollywood divas have also donned some of the most extraordinary jewellery that instantly stole attention. Have a look at them!

Diamonds are a girl’s best friend, but these Bollywood divas would not just stop at diamonds only. Having a gilded career each, these actresses have not just created memorable characters on-screen, but also have inspired audiences with their grace and beauty. While their acting mettle must have taken away most of the attention, their iconic looks have not escaped the eyes of their millions of curious fans, and have continued to create a stir in their minds till date.

Accompanying some of their gorgeously breath-taking looks, the actresses have also opted for some signature jewellery pieces, which are true definitions of everything royal and graceful. These stunning statement jewellery pieces have not just given birth to a new fashion altogether, but people have loved these statement pieces so much that they have gone ahead to incorporate them in their real wedding looks as well. Take a look at some of these brides who have chosen to recreate these jewllery pieces.

Recommended Read: Genelia Deshmukh Re-Wore Her Wedding Lehenga For Brother And Bro-In-Law's Wedding, And We Love It 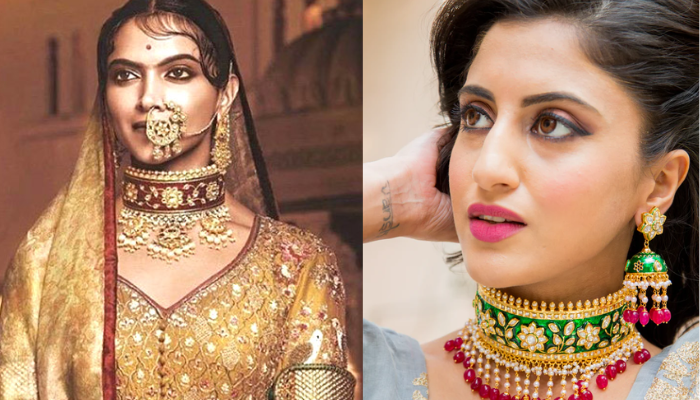 Being a blockbuster film in all aspects, Padmaavat has been one of the most successful yet memorable films in the film industry. While the actors and their performances were much appreciated, their looks did not go unnoticeable as well. For instance, this red ‘Meenakari’ choker worn by Deepika Padukone in one of her scenes, is fitted with red rubies and other semi-precious stones. Interestingly, some of the brides have gone far to replicate an almost exact copy of the jewellery for their grand day. For instance, this bride wore the same choker, however in a green meenakari look. 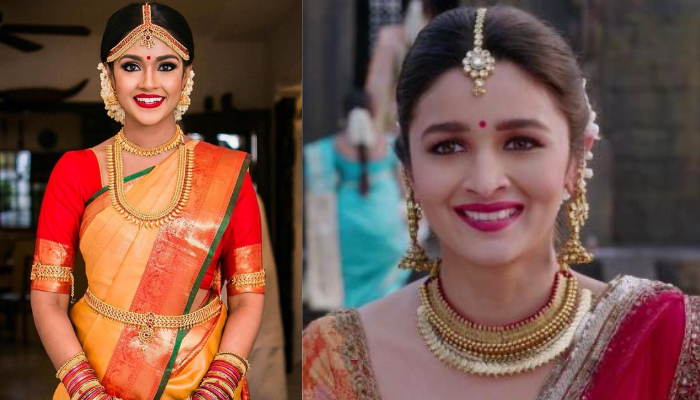 Being a maverick actor right from the beginning, Alia Bhatt has always swooned our hearts with her brilliant acting. From iconic dialogues to memorable looks, the actress has aced everything to perfection. In this typical South-Indian bridal look from the movie, Two States,  Alia looks gorgeous in a Kanjeevaram silk saree, along with some minimal gold ornaments. Hyping up as a popular look in itself, this real-life bride had opted a similar necklace like Alia for her own wedding. Portraying a historical character is not easy, and the graceful Aishwarya Rai Bachchan had aced it effortlessly in the film, Jodha Akbar. Creating a signature fashion with her Rajputana looks in the film, she soon created a huge fan base for antique jewellery in women. While all her looks were classic in the film, it was the heavy multi-chained necklace worn by the actress that took away all the attention. Even after so many years of the film's release, this style of choker has been the top favourite pick of many brides for their wedding. And this bride too has opted for an exact replication of the necklace, and a similar lehenga-choli. 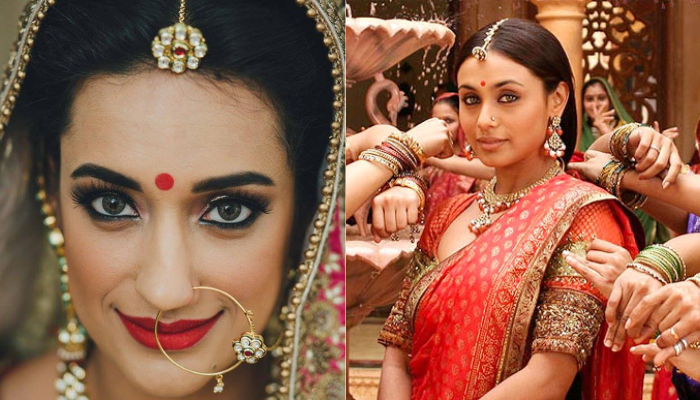 One of the most versatile actresses, Rani Mukerji needs to introduction. From very early in her career, she has made a huge impact on her audience with her outstanding characters and performances. One of her most memorable films, Paheli had initiated a newfound love for styling in traditional ‘kundan’ jewellery amongst the people for a long time. Depicting a traditional Rajasthani character, she accompanied her ‘bandhani’ sarees with a lot of ‘kundan’ jewellery like ‘borla’, bangles and neckpieces, which have become some of the most commonly opted jewellery styles for brides these days. Known for her spontaneity and fun banter, the stunning Sonam Kapoor has carved some of the most loved and iconic characters through her films. Loved by people across all ages, her fashion game has inspired many. While all her looks have been just so awesome, we must not forget one of her swoon-worthy looks in the movie, Veere Di Wedding. Donning a peach-shaded sequinned lehenga along with a choker-style dupatta, she stole the show with her pearl and gem studded fuljhadi dazzlers from the brand, Birdhichand. These soon enough set trends for both brides and bridesmaids to choose similar earrings for wedding festivities.

Well, we hope you have liked this amazing recreations by these real-life brides. Let us know which one was your favourite!