Whenever we embark on a new journey in our life, it is considered auspicious to start it by taking the blessings of the Almighty. Probably that is the reason why most of the rituals of the Indian weddings include a lot of pujas and related activities. After all, getting married is one of the biggest events of one’s life! In fact, some people prefer getting married in their worshipping place itself. And today, we bring to you a list of such Bollywood and television celebrities who got married in a gurdwara. 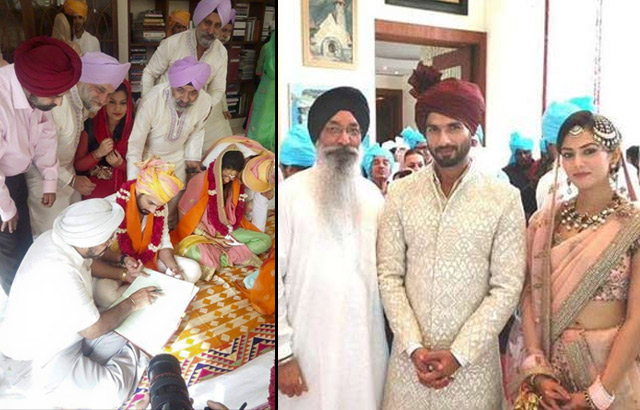 Bollywood hottie Shahid Kapoor married Delhi-based girl Mira Rajput on July 7, 2015. The couple had a simple gurdwara wedding in Delhi with only close friends and family members in attendance. Shahid’s wedding look included a white kurta pyjama teamed up with a pink and yellow safa. Complementing him well, Mira wore a simple pink and green suit. While not many pictures of their gurdwara wedding ever came out, the few that came out in public clearly showed that Shahid and Mira’s gurdwara wedding was a serene affair. The couple later had lavish reception parties in Delhi as well as Mumbai. 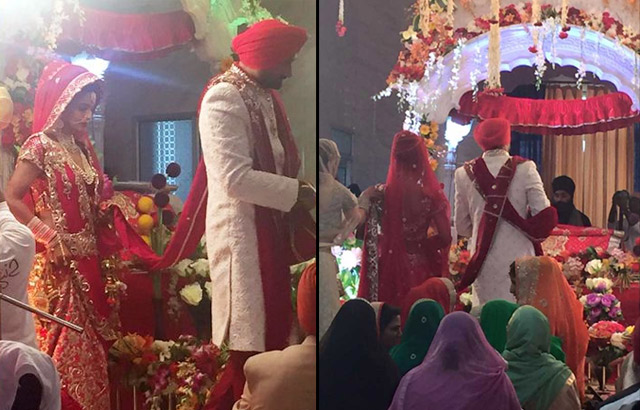 After dating each other for almost eight years, cricketer Harbhajan Singh and Bollywood actress Geeta Basra got married as per Sikh rituals in a gurdwara in Jalandhar. The two took the wedding vows on October 29, 2015, and looked radiant in colour-coordinated outfits. While their reception party was a star-studded affair, the gurdwara wedding only had legendary cricketer Sachin Tendulkar and his wife Anjali among the celebrity guests. 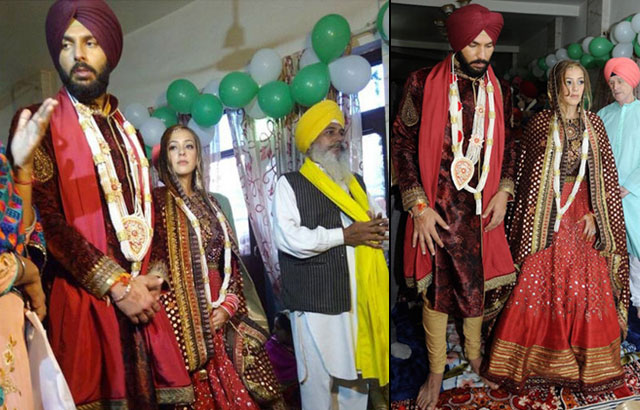 In yet another incident of a cricket world’s hottie getting bowled over by a Bollywood diva, Yuvraj Singh married Hazel Keech on November 30, 2016. The two exchanged the wedding vows on November 30, 2016, at the Fatehgarh Sahib Gurdwara, near Chandigarh. The wedding venue was chosen by Yuvraj and his mother Shabnam Singh’s spiritual guru, Baba Ram Singh Ganduan Wale. The couple even took blessings from him after the Anand Karaj ceremony. If the reports are to be believed Hazel even had to change her name to Gurbasant Kaur to marry Yuvraj as per Sikh rituals.

You May Also Like: 11 Bollywood Celebrities Who Got Married After The Age Of 40 Even though both of them belong to the television industry, their match was made by their parents. Yes, the ex-Splitsvilla winner Mayank Gandhi and Dahleez fame Hunar Hale had an arranged marriage. The two exchanged the wedding vows on August 28, 2016, at a gurdwara in the capital city. 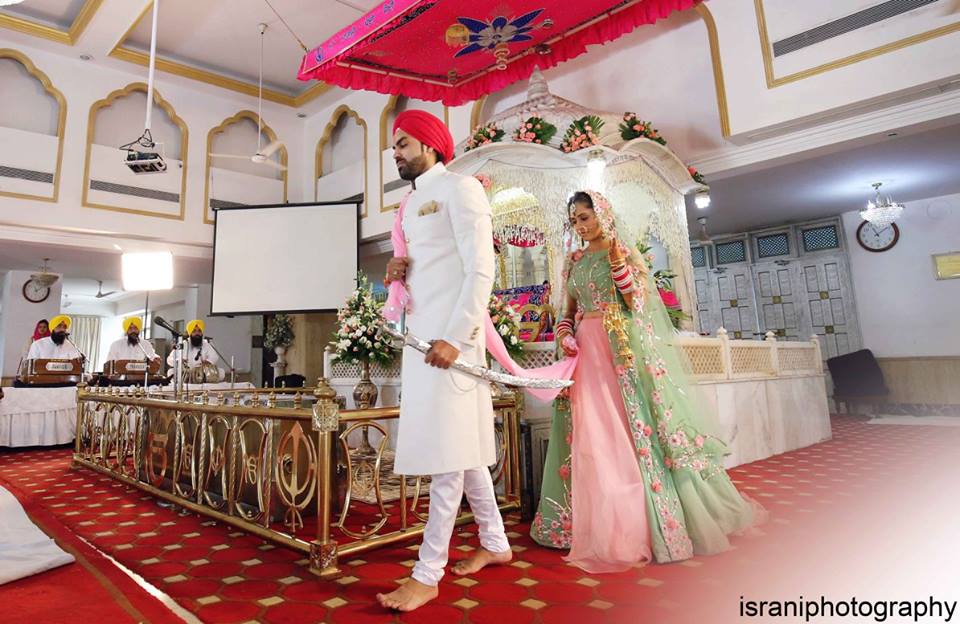 Hunar was an absolute stunner in a pastel green and pink lehenga, and Mayank complemented her well in an all-white kurta pyjama teamed up with a pink pagdi. 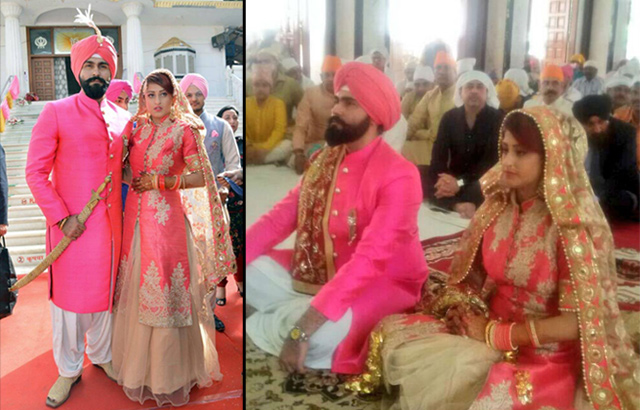 Hindi and Punjabi film actor Aarya Babbar, who was also seen in the eighth season of famous Indian reality show, Bigg Boss, married his long-time girlfriend Jasmine Puri on February 22, 2016. The wedding took place at a gurdwara in Mumbai. The groom looked dashing in a pink sherwani and turban, and his bride complemented him well by donning a lehenga in the same colour. Aarya Babbar kept his fans constantly updated with all the wedding celebrations by posting pictures on his social media account. 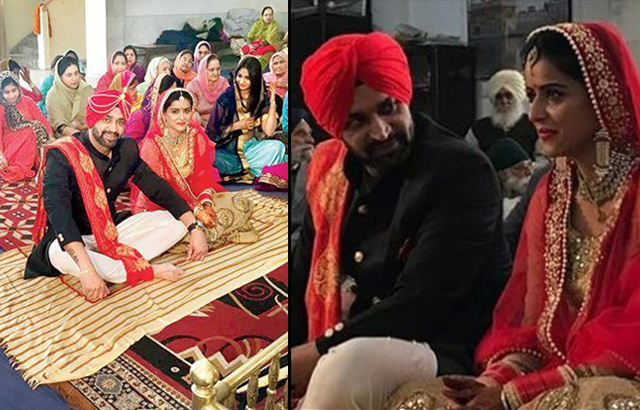 Famous television actress Ginnie Virdi, who got popular with Colors TV’s show Udaan, entered a new phase of her life in the beginning of the year 2017. She tied the knot with her boyfriend Parminder Singh Malhi, who is an advocate by profession. The wedding took place in a gurdwara in Delhi, and most of the team members from her show Udaan were present at the do.

Also Check: 6 Cricketers Who Chose To Have An Arranged Marriage And Are Enjoying Their Marital Life Suryaputra Karn fame actress, Priya Bathija took the wedding vows with DJ Kawaljeet Saluja aka DJ Kawal, on May 22, 2017. Unlike the conventional Indian brides, Priya ditched red for her D-day and wore a pink and yellow lehenga instead. Needless to say, she looked drop dead gorgeous in her unconventional bridal avatar. The groom, at the same time, was no less as he matched his lady-love well in a cream sherwani and a pink pagdi. 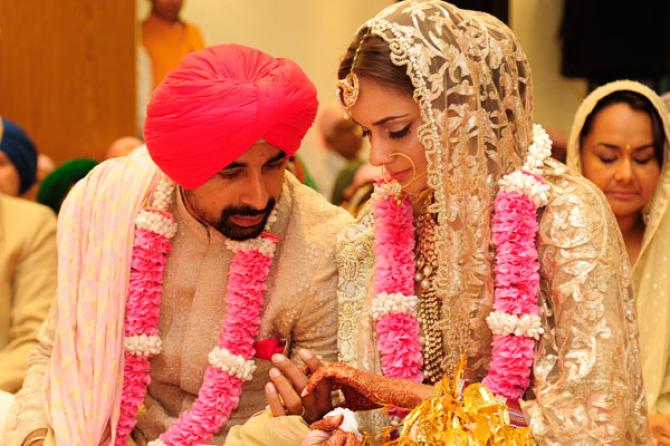 Roadies's ex-contestant-turned-VJ-turned-actor, Rannvijay Singha broke many hearts when he announced his wedding. The handsome hunk got married to the love of his life and long-time girlfriend, Priyanka Vohra on April 14, 2014, in Mombasa, Kenya. The two of them had a lavish and close-knit wedding at a Gurudwara, where their friends and families were present.

Do Checkout: 6 Bollywood Celebrities Who Got Married Not Once, Not Twice, But Thrice 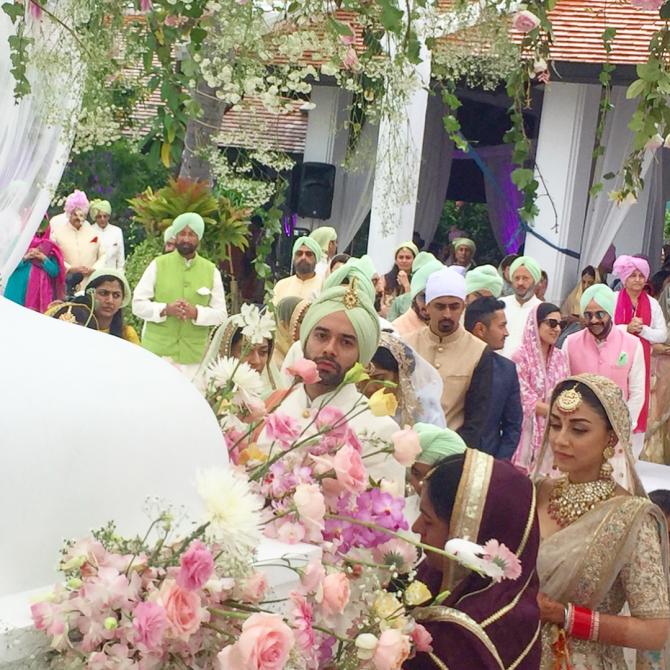 Amrita Puri walked down the aisle in a hush-hush ceremony with her long-time beau, Imrun Sethi on November 15, 2017. Without disappointing other, Amrita looked like a queen on her wedding. The actress sported a heavily embellished bridal lehenga first for her Gurudwara wedding and then a bright green coloured saree. 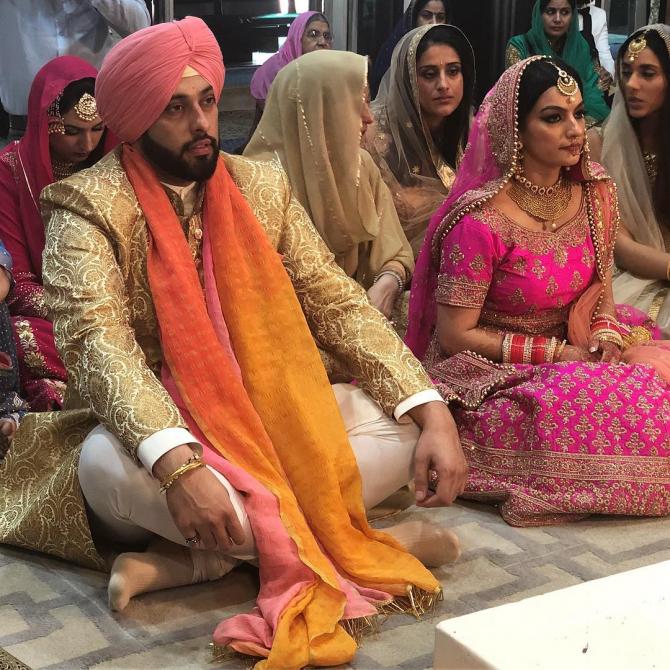 This actor from Yeh Hai Mohabbatein, Sangram Singh tied the not in an arranged marriage set up with a Norway girl named, Gurkiran Kaur. Sangram and Gurkiran walked down the aisle on December 25, 2017, in a Gurudwara and had an Anand Karaj ceremony. The couple complemented each other very well and made a perfect match. 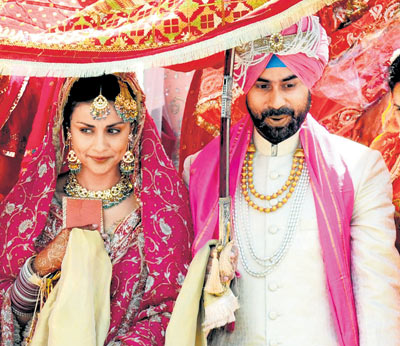 Gul Panaag made a perfect desi Punjabi bride as she walked down the aisle with Captain Rishi Atwari. Gul Panag looked stunning, elegant and graceful in a JJ Vallya onion pink-coloured lehenga and super-flashy jewellery. The wedding of this couple also took place in a Gurudwara in Chandigarh. 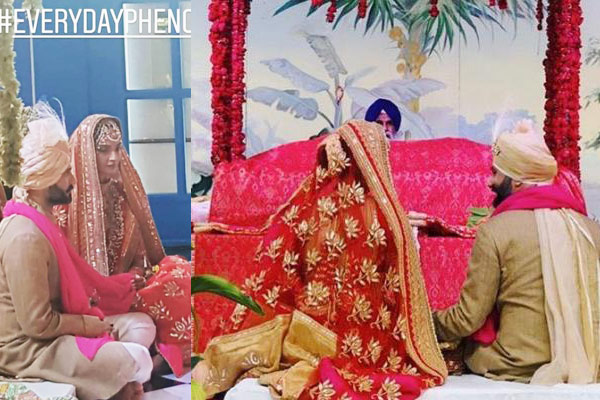 Sonam Kapoor Ahuja and Anand Ahuja tied the knot on May 8, 2018, in a Gurudwara wedding. The couple had a proper Anand Karaj ceremony, where all their near and dear ones were present. In fact, biggies from the industry such as Salman Khan, Rekha, Shah Rukh Khan, Alia Bhatt, Ranbir Kapoor to Rani Mukerji, Sidharth Malhotra, Katrina Kaif, Swara Bhaskar, Karan Johar, Jacqueline Fernandez, Saif Ali Khan, Kareena Kapoor Khan and many others graced the occasion. 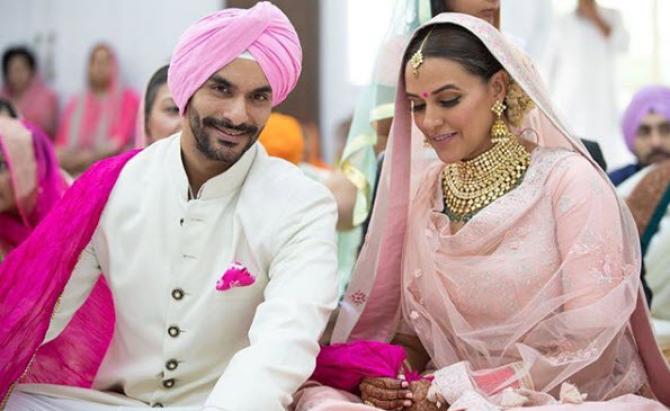 Bollywood diva Neha Dhupia tied the knot with her best friend Angad Bedi in a secret Sikh style wedding. Neha and Angad got married in a traditional Gurudwara wedding on May 10, 2018, which was followed by proper Anand Karaj ceremony. Both of these lovebirds just nailed their wedding day look. Neha looked like a traditional Sikh bride in her pastel pink lehenga by Anita Dongre, gulaabi dupatta, chooda, mehendi, maang teeka and Kundan jewellery.

Gurdwara weddings truly make one of the most serene yet exquisite affairs in the world. That is the reason why even many celebrities chose to go for it.