Today's bold and beautiful women rule Bollywood as well as the red carpet. Here are 10 actresses who have chosen to show off India's rich array of handloom fabrics on the red carpet.

In an age where Bollywood actresses are busy ruling the industry with their strong, empowered female characters as well as setting fire to the red carpet in the best of international couture, we are hard-pressed to see Bollywood actors donning Indian handloom fabrics. But as much as our actresses pull off the boldest gowns from Parisian designers or flaunt their figures in synthetic Indian designer sarees, there are still a few who have been returning to the roots of sustainable fashion and choosing to show off India’s rich array of handloom fabrics and weaves.

Whether in their promotional appearances, at festival celebrations and other industry events or even at red carpet appearances not only in India but also at prestigious international film festivals, here are 10 actresses who have been uplifting the Indian handloom industry.

You may like: Television And Bollywood Divas Who Made South Indian Silk Sarees Look Even More Graceful One of the most famous and respected actresses in Bollywood, Padma Shri Rekha has enjoyed a Bollywood career spanning more than 50 years and has been subjected to her fair share of gossip (yes, her rumoured affair with married Amitabh Bachchan…). Today, however, she is a regular at most prominent Bollywood awards shows and has paved the way for contemporary Bollywood actresses not only through her films but especially with her exquisite choices of Kanjeevaram sarees, taking red carpet glamour to a whole new level. Often seen pairing her zari-laden Kanjeevaram with an elegant gajra-adorned bun, bright red lipstick and sindoor, she has proven that the desi look is the sexiest. 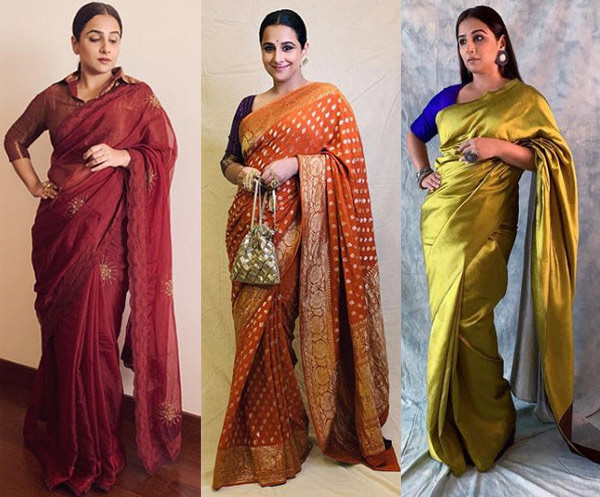 Another actress inspired by Rekha, evident from her South Indian roots and her brave choices of roles and films, Vidya Balan has made a mark as the most coveted and admired Bollywood actress of our time and the only woman to singlehandedly rival all the three Khans in the industry. But with her selective film choices and her defiance of the beauty standards that Bollywood actresses are subjected to, she has also become a trendsetter with her fashion choices. As one of couture king, Sabyasachi’s muses, she redefined the top Indian actress’s red carpet fashion by taking custom-made Sabyasachi handloom sarees to Cannes in 2013 and today, continues to show off her unique aesthetic by donning handloom weaves in all promotional appearances. 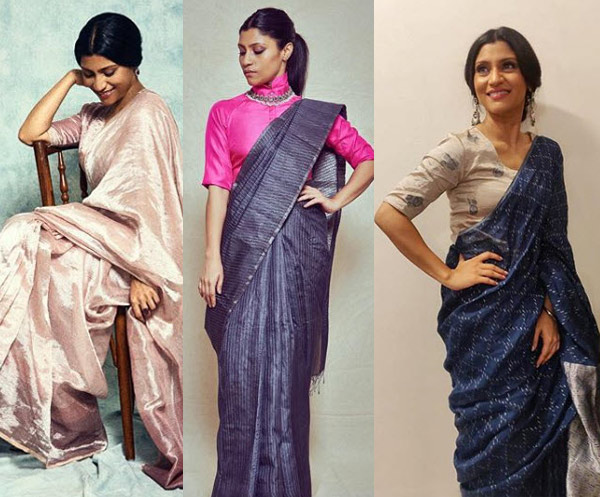 Another Bollywood actress who has always asserted her independent identity as a leading lady, by balancing her appearances in Yash Raj and Dharma films with her work in independent regional cinema, Konkona Sen Sharma is the torchbearer of handloom cotton and linen fashion on the red carpet. A long-time fan and muse of designer Anavila Mishra, Konkona’s choices of monochrome and minimalist sarees and handloom fabrics in all public appearances.

Three-time National Award winner, Padma Shri Kangna Ranaut has stood out with her film choices from her very first role in Bollywood. However, a highly respected actress, she has often been in the eye of controversy due to her animosity towards certain contemporaries or her ‘outsider’ status. However, notable for being styled by her sister and manager, Rangoli Chandel, she has always made waves with her hatke fashion choices on the red carpet and at events such as wedding receptions. Her alternative ways of styling the saree and her promotion of the Indian handloom industry have consistently landed her in the lists of best dressed Indian celebrities.

This might interest you: Konkona Sen and Ranvir Shorey Officially Files For Divorce After Living Separately For Last 5 Years 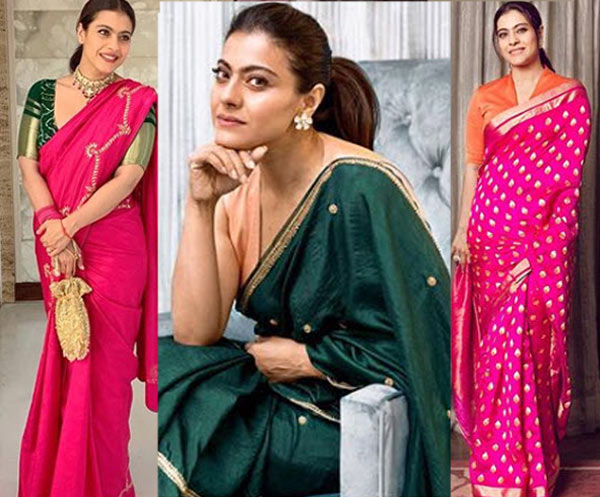 One of the most popular Bollywood heroines, not least because of her classic pairing with the Badshah of Bollywood, Shah Rukh Khan, Kajol represents the blend of her Maharashtrian and Bengali roots. And nothing shows off the two cultures better than the Indian saree! Pairing bright, festive colours in handloom fabrics and desi embroidery with classic jewellery, Kajol manages to look ravishing as well as make the saree look irresistible. The farthest from the quintessential Bollywood heroine, Kalki Koechlin’s minimalist style reflects her mixed ethnic roots and cultural heritage. Usually incorporating handloom fabrics into her loose Indo-Western fusion wear, she has often impressed with her taste in independent Indian designers and her own small handloom saree collection. It is no secret that cotton and linen are the most comfortable fabrics for the tropical climate. Even when 28 weeks pregnant, Kalki looked supremely comfortable and nailed maternity fashion in her less-is-more Anavila linen saree look.

See also: 10 Outfits You Can Easily Create From Your Mom's Old Silk Sarees 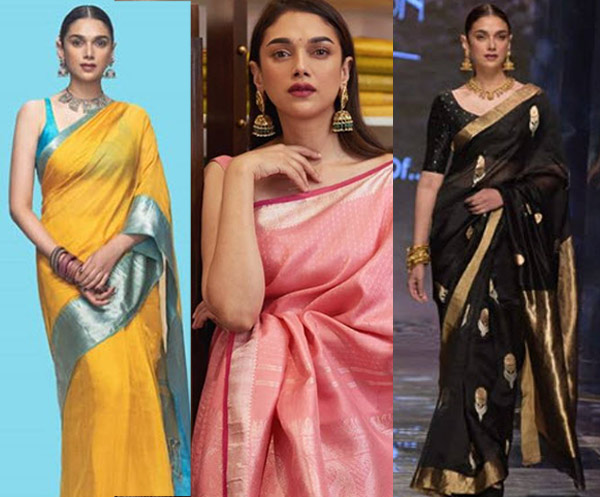 Currently splitting her time between Mani Ratnam films in the South and Bollywood, Aditi Rao Hydari can effortlessly pull off girl-next-door to graceful princess. From walking for the biggest couture designers of India as the showstopper during Fashion Week and doing magazine photoshoots, she has always shown off her love for Indian artisans and handloom sarees. We cannot forget how ethereal she looked in her mother’s black chanderi saree with gold zari embroidery during the India Fashion Week 2019. 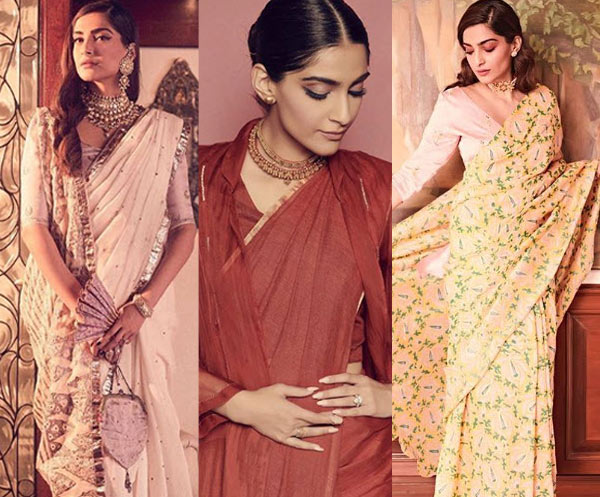 Universally acknowledged as the supreme fashionista by fellow stars and designers alike, this Bollywood actress needs no introduction. Assisted by her partner-in-crime, sister Rhea Kapoor, Sonam Kapoor is a serial experimenter and never fails to make a statement in any red carpet appearance or promotional event. Her range of choices is captured perfectly here by the contrast between the plain red linen saree and jacket, worn for The Zoya Factor promotions, and the luxurious white handloom saree with gold gota patti for a wedding function. An actress who just cannot stop setting all kinds of goals with her genre-and-age-bending roles as well as her norm-defying fashion, Neena Gupta has had a hugely successful few years. Often styled by her designer-daughter, Masaba, and occasionally playing her muse, Neenaji has constantly shown us how to love oneself and have fun with one’s wardrobe. But what we particularly love about her last few promotional appearances is her personal collection of vintage handloom sarees, styled either with a sexy halter-neck blouse or just a lace bralette. Not only is she making recycled fashion look irresistible, but she is also giving today’s young stylists a run for their money… 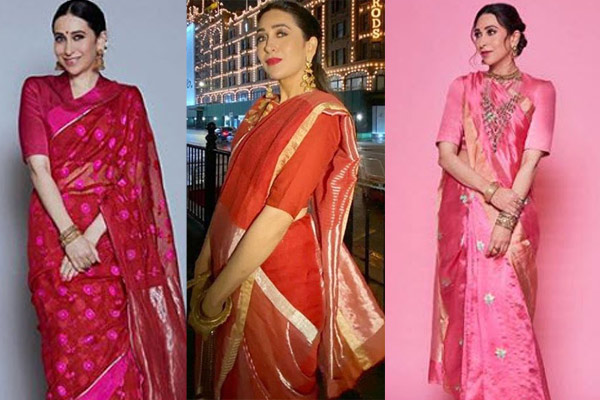 Although seldom seen in recent films, Karisma Kapoor continues to give us major fashion inspiration on social media as one half of the mesmerizing Kapoor sisters or with their many girlfriends. We know she can pull off literally anything, but she loves to play with her style, going for a glamourous Manish Malhotra look one day and ethnic wear on another. Whether it is a classic red saree with plain gold jewellery for an evening event in London or an enviable cherry-blossom pink ensemble for a wedding function, Karisma Kapoor has proved to be an expert in dressing up and down in chanderi.

You may like: 5 Quirky Yet Traditional Masaba Gupta Outfits That You Can Flaunt At Your Bestie's Wedding

While we know that these ladies can pull off anything with equal grace and style, we especially love their collection of sarees and the way they style them. A constant source of style inspiration, we hope that they will continue to vow us and show off the rich variety of Indian handloom creations to the world.