2018 is going smooth and great for Sonam Kapoor Ahuja. With grossing hits like Padman and Veere Di Wedding, Sanju (upcoming), the actor seems to be in a steady phase, both professionally and personally. On her personal front too, the actress got married to her long-time beau Anand Ahuja on May 8, 2018 and they are currently enjoying a super-happy phase in their marriage.

From setting relationship goals, wedding dress goals, star-guest list goals, celebration goals, to both Sonam and Anand including each other’s name/surnames in theirs, was another goal that the ravishing couple has given to the world. 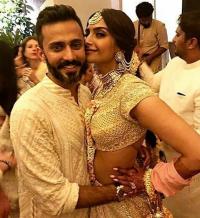 Today (June 09, 2018) is Sonam’s 33rd birthday and she could not help but talk about the heaps of gratitude, she has in her heart for having such wonderful family, friends and a great hubby. The actress is currently in London where she will spend her day with Anand and other close friends. To make it special, Anand posted a story on his Instagram account with a countdown caption. The story had the words “Birthday Girl soon” on it. Check out the picture below: 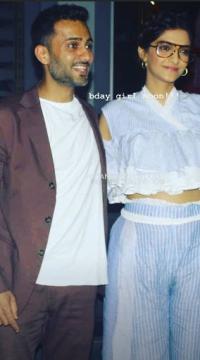 On account of her birthday, Anand posted a beautiful picture of Sonam with an adorable message. He wrote, “The look when @sonamkapoor sees her birthday... That’s just my way of downplaying just how breath taking this picture is!” See the pic: 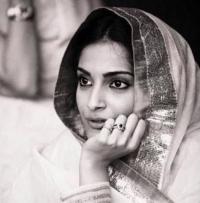 The Neerja star spoke to Hindustan Times about her life after marriage and if she has any special plans on her ‘big-day’. Sonam said, “I don’t know about it being the ‘special birthday’, but married life is amazing. I’m sure every wife thinks that, but I have the best husband in the world. I feel really blessed and happy. If I have my feet on the ground, continue to work hard and do the right thing, good stuff will happen. It might take a while but usually, good stuff happens to such people.”

When asked about her best birthday till date, the doting wife replied, “It has to be the 31st one. It was my first birthday with Anand. I met him when I was 30. It was sweet and simple, but best till date.” (Also Read: Zaheer Khan And Sagarika Ghatge Enjoying Their Romantic Trip In Australia, Pics And Videos Inside!)

She was also asked about the most memorable gift she has received till date on her birthday. To which Sonam replied, “It was a really nice card and a letter that Anand wrote to me on my 32nd birthday. He isn’t a very romantic person by nature but he put a lot of heart in that, so that was really special.”

Sonam, it’s great to hear from you about how much you are enjoying life as a married woman. We wish you a very happy birthday!