On the birthday eve of Riddhima Kapoor Sahni, Bharat Sahni expressed his excitement for his wife turning 40 on September 15, 2020. He posted a throwback picture from their mehendi ceremony.

Birthdays hold a special significance for not just a child but in everyone’s life. After all, it is one day of the year when you are showered with immense love and pampered to the fullest by your loved ones. As you proudly call that one day of the year, ‘yours’, loved ones leave no stone unturned to make it even more special and memorable for you. Riddhima Kapoor Sahni has always made sure to wish her loved ones with lovely wishes and beautiful pictures on her social media handle. As September 15, 2020, is the day when she will be showered with love and wishes, her better-half, Bharat Sahni is leaving no stone unturned to make her birthday even more special by starting the countdown. (Also Read: Taimur Ali Khan Showered With Hug From Kareena Kapoor And Kiss From Randhir Kapoor Screams Pure Love)

Five days before Riddhima Kapoor Sahni turns 40, her better-half, Bharat Sahni had started her birthday countdown with a lovely family picture on his social media handle. With Neetu Kapoor, Randhir Kapoor, Armaan Jain, Anissa Malhotra, Nitasha Nanda, Rima Jain, Samara Sahni in the frame with their friends and relatives, Bharat had captioned the picture-perfect moment as “Thank you Tashu. The foods never been better! #Countdown #to #Ridds #Birthday #Big40.” 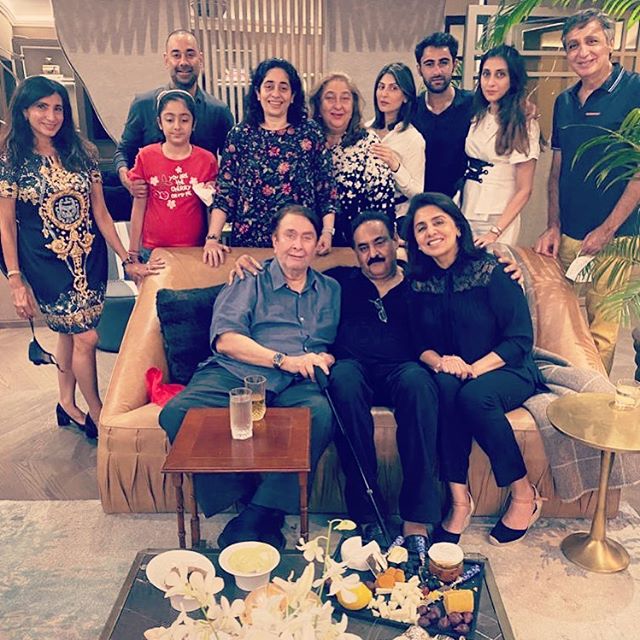 Now on the birthday eve of Riddhima Kapoor Sahni, Bharat Sahni expressed his excitement for his wife turning 40 on September 15, 2020. Bharat took a trip down the memory lane and posted a throwback picture with Riddhima, from their mehendi ceremony. While Riddhima looked gorgeous in an orange-coloured lehenga flaunting her beautiful smile and mehendi adorned hands, Bharat looked dapper in a blue-coloured sherwani. Bharat captioned the post as “Countdown to 40! #FabAtForty @riddhimakapoorsahniofficial.” 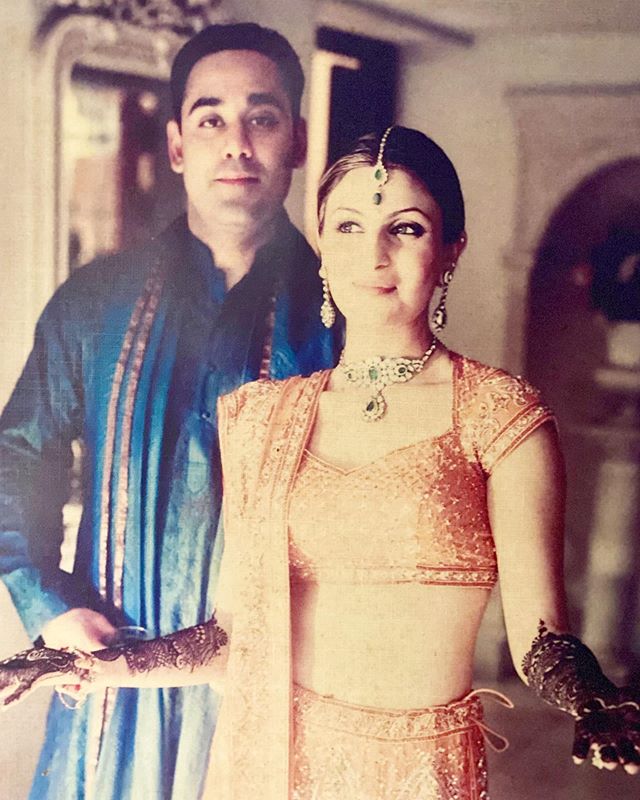 This isn’t the first time when Bharat Sahni had wished his wife, Riddhima Kapoor Sahni on a special day by making her nostalgic with throwback pictures. To mark their 13th wedding anniversary on January 25, 2019, Bharat had posted unseen pictures from their marriage ceremony. Amongst some unseen glimpses from the rituals, there were two pictures of Riddhima’s brother, Ranbir Kapoor fulfilling his brother duties at his sister’s wedding. Ranbir could be seen performing Laja Homa, wherein the brother of the bride puts laja (puffed rice, a symbol of prosperity) in the couple’s hands. Then together, the couple offers the laja as an aahuti amidst the chanting of mantras. Here are the beautiful captures from Riddhima-Bharat’s wedding, where you will spot Ranbir in full action! (Also Read: Tahira Kashyap Wishes Her 'Soulmate', Ayushmann Khurrana On His Birthday With A Cake Smashed Picture) 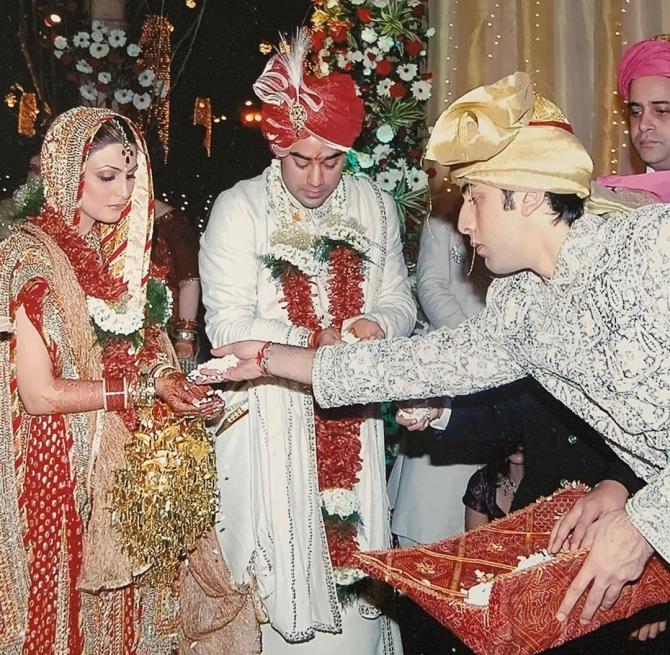 Bharat Sahni had captioned his anniversary post as “Can’t believe it’s been 13 years from this day. Here’s to love, laughter and happily ever after. Happy anniversary my @riddhimakapoorsahniofficial.” Riddhima Kapoor Sahni had wished Bharat on their 13th wedding anniversary with a collage of their pictures and had congratulated him for ‘the best decision he had made’. Riddhima had written, “‘Happy (teen) 13 ’- You were my best friend & will forever be! We have come a long way & today we celebrate the best decision you made #tomanymoreyearsofhappiness #creatingnewmemories #toannoyingyoualotmore Happy 13th Anniversary to us.” On Riddhima Kapoor Sahni’s 39th birthday last year, Bharat Sahni had posted a collage of three pictures. The first one had Riddhima and Bharat posing for the camera, the second one had screamed mother-daughter love as Riddhima adorably hugged Samara and the last one was a stunning picture of the birthday girl. Bharat had captioned it as "Happy happy to my Baby Mama and partner in crime. I truly lucked out! Thank u for being you!" Bharat had later posted a video, comprising of some cherishable memories he had made with Riddhima over the years and he had captioned it as "Happy happy Birthday." Hailing from a family of stars, Riddhima Kapoor Sahni had taken a different road than acting and is a successful designer, owning her own labels. In an interview with Magzter, when asked how she manages her personal and professional time, Riddhima had said, “That’s called time management. I try very hard. My morning just flies. I ensure I do my Yoga in the morning. I can’t skip Yoga irrespective of rain, shine or even if I am sick. This is because it pulls me through the day. I try and finish all my commitments and work right before my daughter comes back to home which is around 4 o’clock. Once she is back, I help her out with homework, talk to her about school and I just don’t neglect her. Fortunately, I have a partner in Mumbai and we delegate work to each other. My work continues through the day until I keep my phone down at night. I personally check all my emails and don’t like to leave everything on my team. I don’t take Instagram enquiries but yes, I do check my e-mails. So that’s how I juggle my time and try finishing everything before she comes back home after school.” (Also Read: Rajeev Sen And Charu Asopa's PDA Level Goes Soaring High In The Recent Pictures Shared By The Couple) We cannot wait to see how Riddhima celebrates her 40th birthday tomorrow!