Today, on January 20, 2020, Malayalam actress, Bhama tied the knot with a Dubai-based businessman Arun. Scroll down to see the gorgeous actress radiating bridal glow in a golden silk saree! 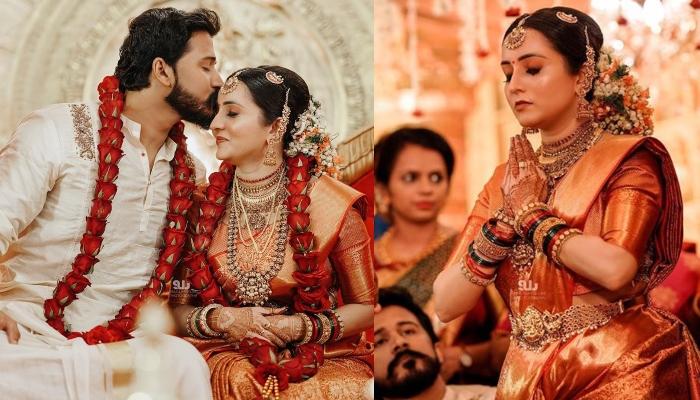 Every year, January brings in a lot of love, happiness and hope for a new future. For some, it is time to make new resolutions, for others, it is the start of a new life as their wedding is fixed in the first month of the year. The year 2020 also started with the grand wedding bash of television actress, Nehha Pendse. And the recent one to join the bride tribe is Malayam actress, Bhama, whose real name is Rekitha Rajendra Kurup. (Recommend Read: Neha Kakkar And Aditya Narayan Enjoy Bachelor Bash With Sara Ali Khan, Kartik Aaryan On Indian Idol)

On January 30, 2020, Bhama tied the knot with the man of her dream, Arun, who is a Dubai-based businessman. Before we take you further into the story and introduce you to the gorgeous bride, let us take a look at her mehendi ceremony. On January 29, 2020, the actress had taken to her Instagram handle and shared a picture of her mehendi ceremony. Along with the picture, she had written, "Mehandi adorns the hands & Life takes on a new colour...#Thank uuuu my Besties&my Family u all made my day beautiful."

Today, Bhama took the wedding vows with Arun at a convention centre in Kottayam. It was an intimate wedding with only family and close friends in attendance. In the pictures that have been trending on the internet, the gorgeous actress is looking pretty in a golden silk saree. On the other hand, Arun was seen in a white shirt and mundu. One picture that won heart was when the groom kissed his bride on the forehead. Take a look at it below:

According to media reports, Arun and Bhama had met each other through their families and it is an arranged marriage set by their parents. Arun has completed his studies from Canada and is Bhama's brother-in-law's classmate. The families of the couple already knew each other. And rest, as we say, is history! (Also Read: Kapil Sharma's Daughter, Anayra Sharma Became The Reason Behind His Proud Moment In Dubai)

In an interview with the Woman, Bhama had talked about her heart out on settling abroad after marriage. She had shared, "I don’t want to go abroad after getting married. I would like to settle down in Kochi." In the same interview, she had revealed why she fell for Arun, and had said, "Arun loves the country. That is why I am returning to Kochi. Arun had never seen me as a movie star since the beginning. There is no such thing as a ‘Star Stuck’. That’s what I liked most." (Don't Miss: Kareena Kapoor Khan Reveals Her Reaction When Her Son Taimur Ali Khan Will Bring His Girlfriend Home)