Bhagyashree had once recalled a funny incident while 'Maine Pyar Kiya' was in the making when she had told Salman Khan to stay away from her. Check out the details inside! 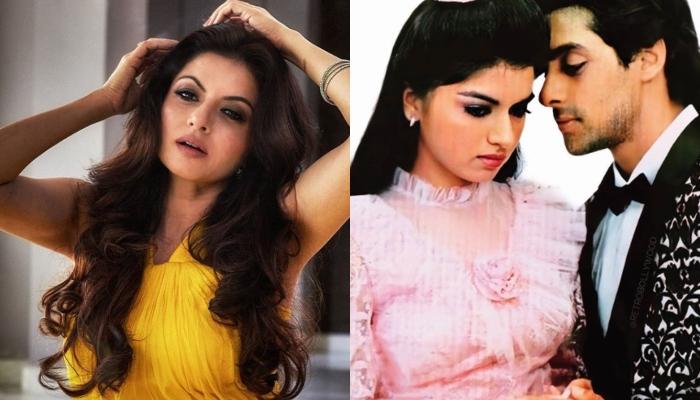 Once in a while, some iconic, historical films are made which are remembered till eternity and thousands of stories about their making revolve around forever! One of such films is Maine Pyaar Kiya which had brought Salman Khan on the summit of success. An innocent love story, side-lined by material differences and the happy ending had won everyone's hearts, so much so, that even today, this movie is remembered. Scroll down to know about a funny incident that the lead actress of Maine Pyaar Kiya, Bhagyashree had shared about the making of it! (Recommended Read: Shah Rukh Khan Reveals Son, Aryan Khan Once Hit A Kid Because She Called His Father 'Fat And Ugly')

Bhagyashree had become an overnight star with her first film, Maine Pyaar Kiya. She had won a million hearts with the portrayal of a shy girl opposite the handsome hunk, Salman Khan. But, to everyone's surprise, despite the stupendous success of the film and being aware of the super-stardom knocking at her door, Bhagyashree had left Bollywood. She had gotten married to businessman-turned-actor/producer, Himalaya Dasani when her first film, Maine Pyaar Kiya had released. Bhagyashree had recalled a funny incident that had taken place while the making of Maine Pyaar Kiya involving her husband, and Salman Khan. Scroll further to know more!

Back in 2017, in an interview with The Times Of India, Bhagyashree had gone on a spree to recall candid moments of the making of the iconic film, Maine Pyaar Kiya, which was also her debut film. She had narrated a funny incident wherein she had strictly warned her co-star, Salman Khan to maintain distance from her to avoid link-up rumours. She had said, "Salman was the first to know about my relationship with Himalaya during the shoot of the song, Dil Deewana. He would follow me around and hum the song in my ear. I kept warning him that people will start talking about us. After irritating me for half-a-day, he said that he knew about Himalaya. He even suggested that I call Himalaya to the location. They were cordial when they met."

She had further added, "My husband (Himalaya) was possessive and he wasn't comfortable seeing me romancing other men on screen. In fact, my in-laws are more comfortable and cool about me acting than him." Bhagyashree's son, Abhimanyu Dassani, in an Instagram live chat with Bollywoodlife, had also revealed some stories about the making of Maine Pyaar Kiya. On the question of his fondest memories from his mother's films, he had said, "There's this one memory I clearly have from Maine Pyar Kiya. Nobody knows this, but Sooraj Barjatya, the director, had actually pursued my mother for over a month before she had said, 'Yes,' to the film. That was really something and it's something I vividly look back at to this day. I just wish that one day I'd be fortunate or privileged enough to have a filmmaker pursue me like that for a role. That'd be a really nice feeling." (Also Read: When Ranbir Kapoor Had Recalled First Movie Date With Then-GF Deepika Padukone, Remembered Her OOTD)

Bhagyashree had quit acting and had left Bollywood for good at the peak of her career. Some time ago, in an interview with Pinkvilla, Bhagyashree had opened up about leaving Bollywood to raise her kids and her much-awaited comeback. Bhagyashree had accompanied the show with her son, Abhimanyu. On the question of whether leaving movies was a difficult decision for her, she had replied, “Yes, and no. A tough call because by then I had realised that I do enjoy acting and I was like I wish I had the possibility of managing both. But no, because he just took over my life. My entire focus and happiness were having him with me. At that point, it was not a tough choice. All that I wanted to do was spend time with him." (You May Also Like: When Kareena Kapoor Reacted On Being Stuck In A Lift With Ex, Shahid Kapoor And Hubby, Saif Ali Khan)