'Bigg Boss 11' fame, Benafsha Soonawalla praises her boyfriend, Priyank Sharma and posts a mesmerising picture with him. Take a look!

The whole nation is fighting against the dangerous coronavirus pandemic with everything they have in their powers. However, so far the entertainment industry like many others is on hold and it’s hard to predict a time when we will be able to see the glamour world back in action. Talking about the glamour world and celebrities, in recent weeks, all the headlines belonged to the most followed young couple of the country, Priyank Sharma and Benafsha Soonawalla. The two famous faces that MTV has given to the entertainment industry had also entered the house of Bigg Boss for their 11th season and after that, their popularity had hit new heights. (Recommended Read: Karan Johar Thanks His Closest Friend, Manish Malhotra For The Special Gift On His 48th Birthday)

The couple never skips a chance to shower love on each other through their mushy captions and adorable pictures on social media handles. Recently, Benafsha Soonawalla posted a picture on her Instagram handle with her beau, Priyank Sharma and told every girl out there to look for a boy like him in their life. On May 26, 2020, Benafsha Soonawalla took to her Instagram handle and posted a picture with her boyfriend, Priyank Sharma. The picture is simply one of their best pictures to this date because of two reasons. The first one is about their glamorous personality, as Priyank is looking dapper in his all-black outfit teamed up with a black and white striped shirt. On the other side, Benafsha is looking stunning in her brown coloured outfit. Well, the other reason is their chemistry, the way Priyank has circled his arms around his ladylove and the wide smile on the face of Benafsha tells us how happy they’re with each other. Along with the picture, the young lady advised every girl that they should be with someone, who is like her beau, Priyank in her caption that can be read as “Find someone that treats you like a bloody Queen.” Take a look. (Don’t Miss: Himanshi Khurana Misses Boyfriend, Asim Riaz, Shares A Sexy Intimate Monochrome Picture With Him) 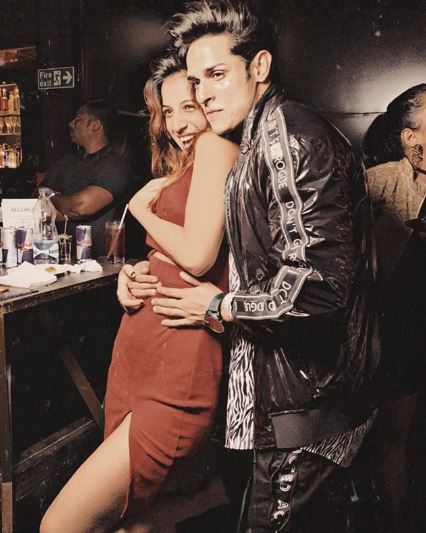 Everyone is aware of the incredible relationship that Priyank and Benafsha have right now and how much they’re madly-in-love with each other. Thus, this isn’t obviously the only time when Benafsha has given us a reason for drool over their beautiful chemistry. On May 17, 2020, Benafsha Soonawalla had taken to her boyfriend, Priyank Sharma’s wardrobe and had donned his light-green sweatshirt with black trousers to make a dance video. In the dance video, we can see the young lady dancing on an American song sung and choreographed by Dani Leigh. Nevertheless, it is her beau, Priyank Sharma, who had helped her in perfecting the choreography. The gorgeous lady had showed her killer moves in the video and had written a caption along with it that could be read as “@priyanksharmaaa Choreography - @iamdanileigh Taught me choreography- @priyanksharmaaa.” But what caught everyone's eyes is the nickname with which Benafsha had called Priyank in the comments section after he had said thank you for the credits, which could be read as “Thank for the forced credits.” In a reply to which, Benafsha had written “@priyanksharmaaa my rasmalai.” Take a look! 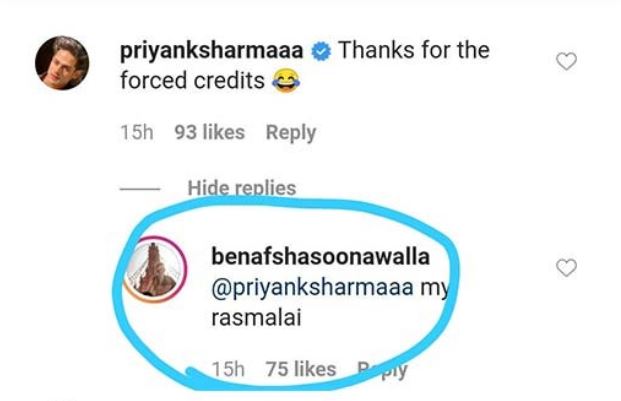 In the interview with the Bombay Times, Priyank had talked about the initial phase of their relationship and how he had started feeling something for Benafsha inside the Bigg Boss house. He had revealed, “I had met Ben through common pals. We became good friends and I got to know her better during Bigg Boss. Both of us were single when we entered the house. We felt a strong connection, especially after I re-entered the house post my eviction. We developed feelings for each other but didn’t want to make any commitment without being sure. Once out in the real world, we spent a lot of time together and realised that we were in love. It has been exactly two-and-a-half years since Ben and I are together. She gives me a sense of completeness and we fit together like missing pieces of a puzzle.” (Also Read: Dipika Kakar Twins With Her Hubby Shoaib Ibrahim On Eid, Repeats Her Anniversary Outfit With A Twist) Do you want a boyfriend like Priyank? Let us know! 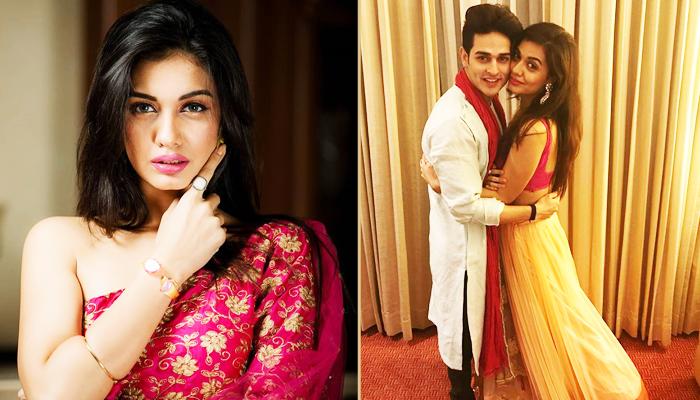 Spiltsvilla fame, Divya Agarwal has been in the news quite a lot recently because of her relationship with Bigg Boss 11 contestant, Priyank Sharma. Another reason for her to be in the news now is that Divya is coming back on TV with MTV’s new show, A Date to Remember.