Athiya Shetty wearing KL Rahul's t-shirt hints at the comfort they both share and is a probable proof that the two are dating. Take a look at the picture inside!

Aren’t we all a fan of ‘Bollywood met Cricket’ couples? There is a long list of cricketers, who found their life partners in Bollywood actresses and are living their happily-ever-after! There are some couples, who made it together to eternity, like Anushka Sharma-Virat Kohli, Zaheer Khan-Sagarika Ghatge, Yuvraj Singh-Hazel Keech, and Harbhajan Singh-Geeta Basra. On the other hand, there were many couples, who were rumoured to be dating, but had never made it official or could not take their relationship to the next level. Joining the likes of Yuvraj Singh-Kim Sharma, MS Dhoni-Deepika Padukone, Yuvraj Singh-Deepika Padukone, Virat Kohli-Isabelle Kaif, there is KL Rahul-Athiya Shetty, who are rumoured to be in a relationship, however, there is no official confirmation yet. (Also Read: Mira Rajput's Unseen Childhood Picture In A White 'Ghagra-Choli' Proves She Is A Born Fashionista)

Yes, cricketer, KL Rahul and Suniel Shetty’s actress-daughter, Athiya Shetty are rumoured to be dating since some time. The couple has not come out in open yet, however, their social media banters speak a lot about the same. Not just this, KL also shares a great relationship with Athiya Shetty’s parents, Suniel Shetty and Mana Shetty. Now, we got our hands on a fan-made collage of the rumoured couple, which says a lot about their relationship status. 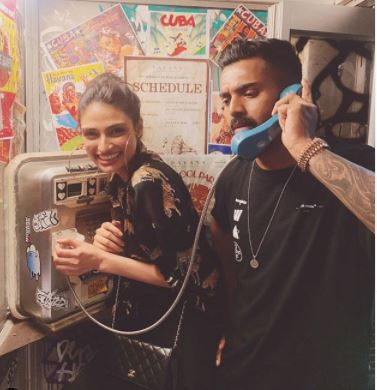 Social media is like a memory box as often the various fan pages of the celebrities dig deep into their lives to bring out some unseen memories of them. Scrolling through our social media handle, we stumbled upon a fan-made collage, which showed Athiya Shetty and KL Rahul in the same t-shirt. On the left hand side, we can see Athiya comfortably sipping on to her coconut water, while lying in the couch wearing KL Rahul’s tie-and-dye T-shirt. On the right hand side, we can see KL Rahul in the same t-shirt, sitting in some cafe. This fan-made collage speaks volumes about their comfort around each other. Take a look: The whole facade of Athiya and KL Rahul dating each other had caught attention a year ago in August 2019. Athiya had shared an inspirational quote on her Instagram handle and had captioned it, "Always, always." On the post, her close friend and designer, Vikram Phadnis had written a series of comments, suggesting that something is brewing between Athiya Shetty and cricketer, KL Rahul. In one of the comments, Vikram had mentioned KL, which happens to be the initials of the Indian cricketer. The series of comments had continued, and in reply to one of Vikram's comment, Athiya had written, "Time to block you." (Don't Miss: Shah Rukh Khan's Reply When Asked If Wife, Gauri Walks In On Him Shooting Romantic Scenes Is Witty) Athiya had added more fuel to the fire some time ago. On the occasion of KL Rahul's birthday on April 18, 2020, Athiya Shetty had posted a picture with KL Rahul, all cosying up and smiling. We could see her leaning on his shoulder, and he was seen smiling. She had captioned the picture as "Happy birthday, my person" followed by a white heart emoji. KL Rahul's name has been linked up with several Bollywood actresses over the past year. Earlier, he was rumoured to be dating Alia Bhatt's BFF, Guilty fame, Akansha Ranjan Kapoor and Munna Michael fame, Nidhhi Agerwal. However, the cricketer had denied the rumours. In an interview with the Bombay Times, Rahul had said, "Oh, all these things have been written about? I don't really read the papers, so I don't know what has been written about me. I have learnt to keep my personal life personal and not make it a thing to talk about. I am committed to cricket right now." On being asked about his relationship status, the cricketer had retorted, "I don't really know. When I figure that out, I will give you a call and tell you." (Recommended Read: Hrithik Roshan And Sussanne Khan's Unseen Wedding Video Includes Their Jaimala And Sindoor Moment) 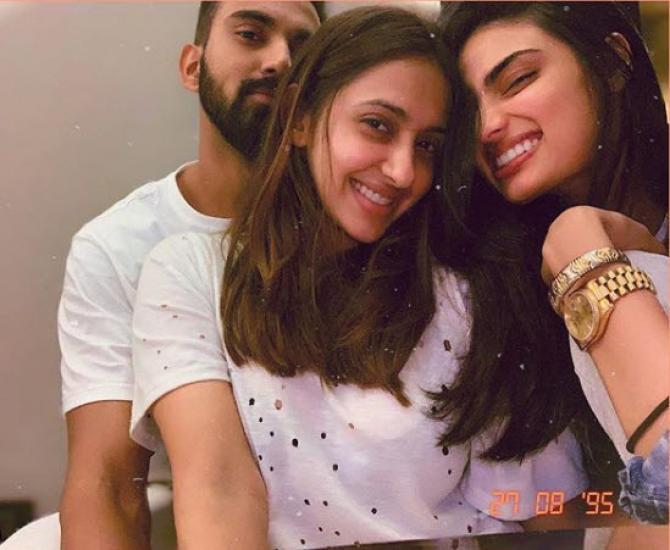 What are your views about KL Rahul and Athiya Shetty’s relationship?