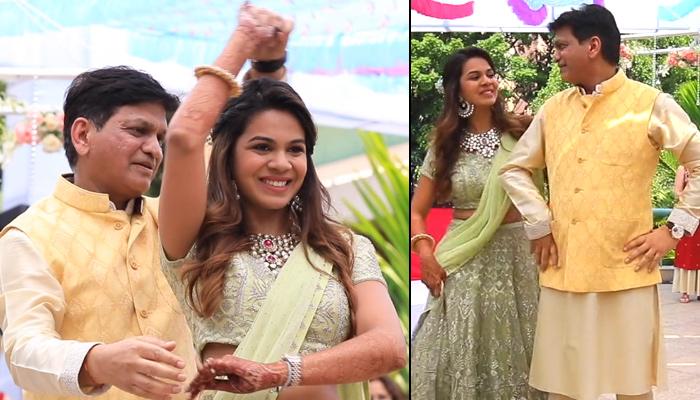 “Daddy's li'l princess!” - These are the words that every girl can relate to, without any second thought. No matter how many men we date or become friends with, but no one can ever love us like our fathers. A father pampers his daughter to the core, fulfils her every need and loves her like his princess. It is rightly said that "Daddy, I may find my prince someday, but you'll always be my king!" And the thought of leaving him someday is one of the most disheartening thoughts a girl has for her wedding. (Also Read: Emotional Moments Shared Between A Father And His Daughter On Her Wedding Will Leave You Teary-Eyed)

Amongst all the wedding rituals and fun-filled ceremonies, the most awaited one is the emotional father-daughter dance. It does melt and touch everyone’s heart. In a video shared by Dream Diaries, we get to witness this lovely moment between a real bride and her father. And despite three days, six events, way too much food, one epic baarat; the moment that touched everyone was the father-daughter dance.

The bride, Anushree Choudhary danced with her father on Hum Dono’s song, Abhi Na Jao Chhod Kar and the moment is just priceless! While the bride was looking mesmerising in a pista green-coloured lehenga, her father looked dapper in a sunshine yellow-coloured bandhgala. Sharing the video, Kartik Bhagat wrote, “This is the most beautiful Father-Daughter dance performance we’ve seen and captured. Do watch it and tag your favourite person Anushree + Vishrut #AnuGotHerVish #DreamDiaries #fatherdaughter #Love.” (Also Read: Reason Behind 'Kanyadaan' Being The Most Emotional Moment For A Father And Daughter)

Isn’t it adorable, watching this lovely duo dancing to this amazing track which exemplifies father’s feelings as his daughter is getting married? Did you notice the hashtag of Anushree and her groom, Vishrut, #AnuGotHerVish, in the aforementioned caption? Isn’t this such a creative one? While going through this hashtag, we got our hands on another video of the bride, Anushree dancing on her sangeet, but this time with her soulmate, Vishrut. The then soon-to-be-married couple, Anushree and Vishrut danced on the track, Chal Pyaar Karegi from Salman Khan and Twinkle Khanna starrer film, Jab Pyaar Kisise Hota Hai. Here’s the video:

Coming back to the father-daughter dance, do you wish to see another lovely performance by India’s richest man, Mukesh Ambani and his daughter, Isha Ambani? Well, recently on his elder son, Akash Ambani’s engagement to Shloka Mehta, Mukesh Ambani grooved to Harshdeep Kaur’s tune of Mudke Na Dekho Dilbaro from Alia Bhatt’s film, Raazi, with his daughter Isha Ambani. He got very emotional while dancing to this track with his daughter, and it will surely touch your heart too. Checkout the video:

As Kareena Kapoor said in her film, Main Prem Ki Diwani Hoon, “A Son Is A Son, Till He Gets Himself A Wife, But A Daughter Is A Daughter, All Her Life”, daughters are indeed, Papa Ki Pari. Don’t you agree, girls? (Also Read: Watch This Adorable Dad Giving Away His 'Laadki' In This Emotional Wedding Video)