Anushka Sharma sportingly took 'Guess The Gibberish' challenge and while some she guessed it on time, the others which she couldn't, were completed by her hubby, Virat Kohli.

To fight the boredom during the ongoing COVID-19 lockdown and in the absence of socialising and outdoor activities, social media is flooded with hilarious challenges and creative trends. From #QuarantinePillowChallenge, #PoopChallenge, #NakedChallenge, #FliptheSwitch, #DontRushChallenge, #SareeChallenge, #DalgonaCoffeeChallenge, #TheGestureChallenge to #OhNaNaNaChallenge, the social media trends have kept everyone occupied during the lockdown. Latest one is the ‘Guess the Gibberish’ challenge on Instagram that everyone’s hooked on to. And Anushka Sharma is no different! (Also Read: Angad Bedi's Dilemma To Appreciate Or Criticise His Wife Neha Dhupia's Cooking Is Every Husband Ever)

Be it trying out different social media challenges, playing Ludo and Monopoly with her family, clicking goofy selfies with her husband or treating her fans with hilarious ‘Ae Kohli, Chauka Maar’ video, Anushka Sharma and Virat Kohli have proved that the lockdown phase is nothing but a blessing in disguise. For their fans, Anushka and Virat have never let their spirits down and a few weeks back, the former had shared the playlist they’re listening on loop. In the first story, Anushka had revealed the names of the artists she’s listening to, and it included Prabhdeep, Prateek Kuhad, Ritviz, and others. While in the second story, Anushka had revealed the old songs they are listening, and we have to admire their taste in music. Some of the notable songs include Numb, In The End, Butterfly, Nothing Else Matters, Truly Madly Deeply, and many others. 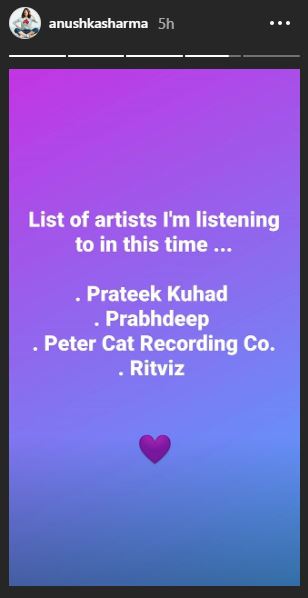 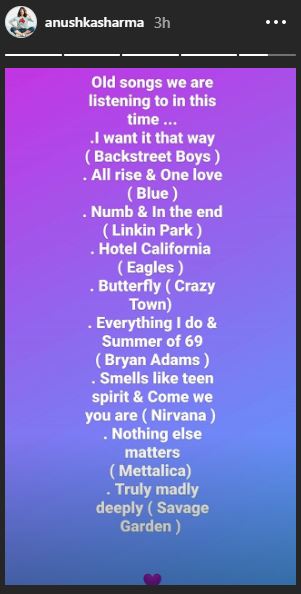 Looks like Anushka Sharma is hooked on to the ‘Guess The Gibberish’ challenge on Instagram, in which a popular term, saying or phrase appears in the form of haphazard spelling that the participant needs to decode and say before the time runs out. Anushka sportingly took the challenge and while some she guessed it on time, the others which she couldn’t were completed by her hubby, Virat Kohli. Giving it back to her dear friend, Karan Johar, Anusha wrote, “Posting this for @karanjohar who thinks I’m terrible at this. Take this you”, “And take that @karanjohar!” atop her videos. In others when Virat aced the challenge and she failed, Anushka wrote, “While I was gloating, ladka managed to guess while lifting weights”, “Ladke ko sab pata hai” atop them. Check out her videos:

Sometime back, Anushka Sharma had posted a picture of a game of their Monopoly with hubby, Virat Kohli and her parents. Speaking about the importance of family in our lives, Anushka had written, “It’s from our primary care givers - family that we learn how to tread the journey of life, how to walk, how to eat, how to socialize & then face the world. This forms our initial conditioning that has a lasting impact on us. In the world we inhabit today, there is a lot of uncertainty and I'm sure a lot of you have found that solace & sense of familiarity with your families.” (Also Read: Vicky Kaushal On Violating The Lockdown Rules As He Tried To Visit Alleged Beau, Katrina Kaif) 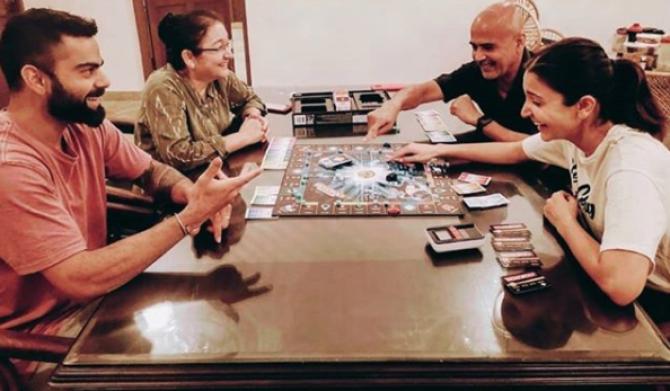 Anushka Sharma had further talked about making the most of the moments in the lockdown with the precious ones in your life, “Stay at home to take care of everyone precious in your lives. And also make the most of these moments ... smile, laugh, share, show affection, clear mis-understandings, develop stronger/healthier bonds, discuss life and dreams and pray for a better tomorrow. We all have been moved deeply, we all have been affected deeply and hopefully we will carry forward these lessons in the days to come. And hopefully, we have all conditioned ourselves to relook at the world we inhabited before all of this happened... P.S. : It was a super close game of Monopoly and the competitive side of everyone was out there. Any guesses who won??” Later, Anushka had posted an Insta story, revealing the winner of the Monopoly game and it was none other than the ‘winner of her heart’, Virat Kohli. 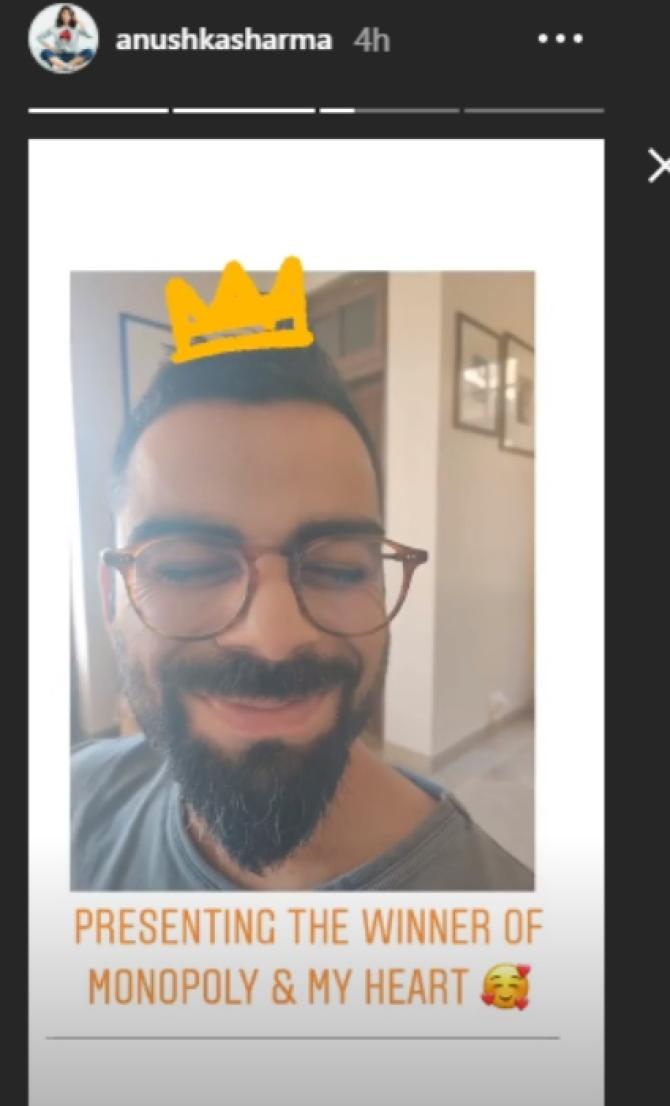 In an interaction with Pinkvilla, Anushka Sharma was asked about her and hubby, Virat Kohli’s fitness regime during the ongoing lockdown. Revealing that they aren’t doing something special with their diets and following a normal daily routine, Anushka had retorted, “We, honestly, are not doing anything different from what we normally do. I think Virat and me are people who don’t believe in diets and we just have a very healthy lifestyle. We have always been like that. There are certain things we don’t eat because they are not good for you, we try to eat food which is alkaline so it’s kind of easy on the stomach and keeps you healthy because if your body is alkaline your immunity is good and that’s something that we have always followed.” Revealing how they are boosting their immunity and their morning routine, Anushka Sharma had continued, “I think all of us are trying to do whatever we can to boost our immunity. We have been having a lot of haldi, haldi in the morning when we wake up, we are having haldi ginger and Kali mirch ka chai (tea) and we are trying to drink a lot of water - sometimes we forget but we try to drink a lot of water.” (Also Read: Milind Soman Reveals How Things Have Changed Post-Marriage With Wife, Ankita Konwar) Have you tried ‘Guess The Gibberish’ challenge yet? Let us know!