Bollywood actor, Anil Kapoor posted some unseen pictures with his daughters from their childhood days to wish them 'Happy Daughter's Day'. Take a look!

They say he's just like wine, the older he gets, the better he gets. Yes! We are talking about the man, who has stopped ageing and keeps on inspiring us with his outstanding fitness and exceptional acting, the one and only, Anil Kapoor. Over the years, he has entertained us with blockbuster movies like, Judaai, Beta, Ram Lakhan, Laadla, Nayak: The Real Hero, Tezaab, Mr India, Bulandi, and the list goes on and on. Apart from his professional accolades, he has been blessed with a loving, caring and supportive family. (Recommended Read: Shashank Vyas Reveals Pratyusha Banerjee Had Cut Off From Her Friends Once She Got Into Relationship)

Whether we talk about his wife, Sunita Kapoor being his constant supporter in all these years or his three children, Sonam Kapoor Ahuja, Rhea Kapoor and Harshvardhan Kapoor, Anil is a proud husband and even more proud a father. Well, on the special occasion of Daughter's Day, the doting daddy once again proved that he's simply the best dad of the entertainment industry. Scroll down to know the reason! On September 27, 2020, Bollywood actor, Anil Kapoor took to his Instagram handle and posted three adorable and unseen pictures with his daughter, Sonam Kapoor Ahuja and Rhea Kapoor from their childhood days as he wished them 'Happy Daughter's Day'. In the first picture, the actor can be seen holding his two little queens in his arms, while the second one is also a similar photo from the same time, but it's the third picture that will make you fall in love with this trio, as they all looked classy and adorable. Along with these pictures, Anil Kapoor wrote some heartfelt lines for his daughters, and it can be read as "To my pillars of strength! Thank you for making my life beautiful & complete! Seeing you both grow up to be so talented, courageous and brilliant fills me with so much happiness & pride! Love you always!! Happy Daughter Day!" Take a look: 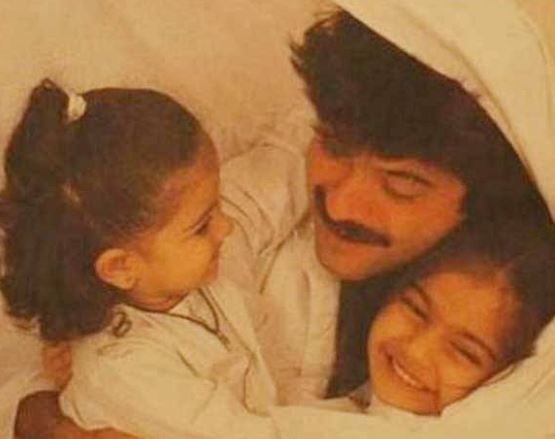 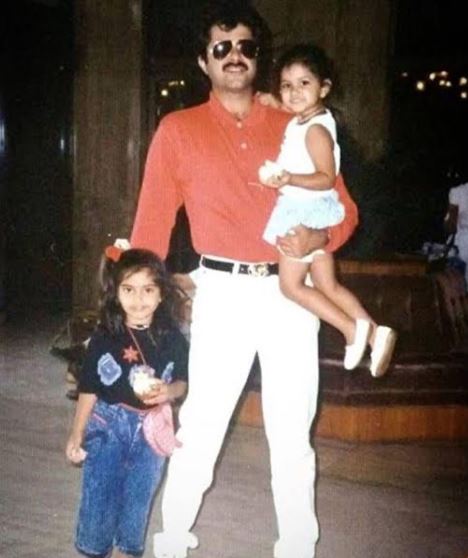 After receiving such a fervent and heart-melting wish from their father, both Sonam and Rhea took to their respective Instagram stories and said thank you to their dearest daddy. While, Rhea Kapoor shared her daddy's post, her doting sister, Sonam Kapoor wrote, "Love you and miss you daddy @anilkapoor" atop it. There's no denying in the beautiful fact that Anil Kapoor shares a warm and friendly bond with his two daughters and is simply a dream daddy for every girl out there. However, in an interview with the Bombay Times, Anil had talked about the changes which he had noticed in his daughter, Sonam, after marriage. He had revealed that she has started to cook in London. However, he hasn't tried any of her dishes, but he has heard that she cooks well. (Don't Miss: Kareena Kapoor Khan Wishes 'Best Bro' Ranbir Kapoor, Along With 'Bua', Rima Jain On Their Birthday) 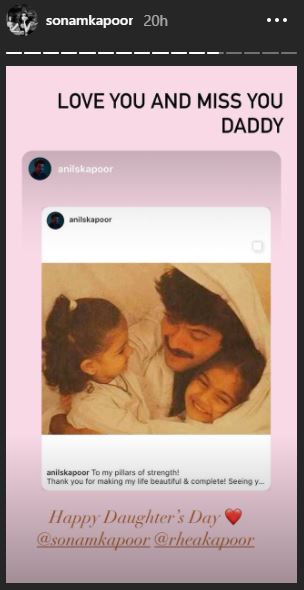 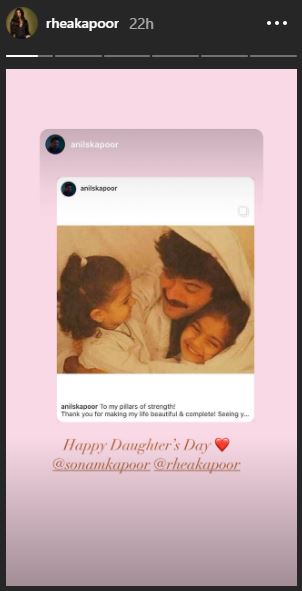 Earlier, in a media interaction, Anil had talked about the bond he shared with his daughter, Sonam's husband and had said, "He's not my son-in-law, he's like my son... I'd say, friend. We bond over health, fitness and loving our parents and family. He's very work-oriented, so we talk about that. Of course, there are things that I learned from him since he has travelled so much, has studied in one of the best universities. These things I'm taking from him. He's young and comes up with great, fresh ideas where health is concerned. He has got a lot of depth and is very spiritual. It's a combination of so many things we relate and connect to." (Also Read: Mahhi Vij Reveals Whether Her Daughter, Tara Jay Bhanushali Will Become An Actress In Future Or Not) 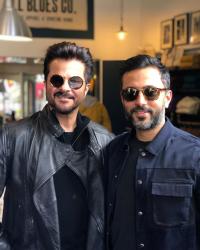 Did you like Anil's Daughter's Day wish for Sonam and Rhea? Let us know! One of the most underrated names of the entertainment industry, Rhea Kapoor is the one, who had turned her sister, Sonam Kapoor into a millennial influencer. She is not just a style maven or another ‘Kapoor’, but she is the mind and soul behind some of the hit films such as, Veere