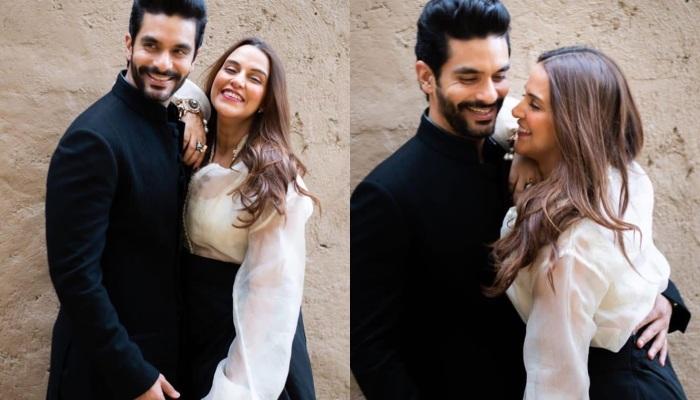 One of the famous and most talked about couples from the tinsel town, Angad Bedi and Neha Dhupia are one couple who knows quite well how to surprise their fans. First, it was on May 8, 2018, Neha and Angad gave a jolt to their fans when they secretly tied the knot as per Anand Karaj rituals, and shared the picture from the ceremony on their social media handles.

Until then, no one knew that they were even dating each other. And then, a few months after they tied the knot, Angad confirmed on August 24, 2018, that Neha was pregnant with their first child. Sharing cute pictures with Neha and her baby bump, Angad captioned the post as, “Ha! Turned out this rumour is true #3ofus.” (You May Also Like: Ranveer Singh Kisses And Hugs Deepika Padukone In Front Of Fans At 'Gully Boy' Screening)

Ever since their marriage, Angad and Neha have been giving marital goals to other couples out there. Today, February 14, 2019, happens to be the couple's first Valentine's Day post-marriage. On the romantic day of Valentine's 2019, Angad took to his official Instagram handle and shared a lovely post wishing his lady-love, Neha. Here's what Angad Bedi posted:

Along with the above romantic captures of the two, Angad captioned the snaps as, "Happy Valentine’s Day my love. You are my world and my strength. May we walk many miles together ... through good times and tough times.. may we laugh and celebrate each day. No matter what.. I will always love you. @nehadhupia waheguru". Isn't it so cute? (Also Check: Ridhi Dogra-Raqesh Bapat, Post Separation Enjoy 'Night Routine' With Pals Sanaya Irani, Mohit Sehgal)

After Neha and Angad married, the couple released a joint statement that could be read as, “Marrying your best friend is one of the greatest feelings in the world, and we are extremely fortunate to have found love in each other. It has been a beautiful journey knowing each other and after formalizing the wedding earlier this year, today, we exchanged our vows in a beautifully simple, private and intimate Anand Karaj ceremony in Delhi. We look forward to celebrating and sharing this special moment with our friends and colleagues in Mumbai in the next couple of weeks. Thank you for showering us with so much love. Your blessings have truly made this day so much more special”.  (Do Read: Priyanka Chopra Reveals How Nick Jonas Made Her Bridesmaids Feel Depressed A Day Before Wedding)

Recently, on Neha's show, No Filter Neha, Angad committed that Neha was pregnant before marriage. Not just this, he even shared their parents' reaction and said, “I said, “You know what? We are going to have a baby!” Bohot jhaad padi.” Angad also revealed the number of women he has been in a relationship with till now, and shared, “No, I’ve not been with so many women. I think I might say about 75.”

Speaking about his relationship with elder women, Angad remarked, "But I think when I was 19 or 20, yea that was the time. In one situation there was a 10-year difference. The next was 3.5 years. I would say, technically, my first relationship was then." Neha shared two promo videos of their candid chat and wrote on one, “He got me. I got him but more important I got him on #NoFilterNeha. Listen to @angadbedi chat about everything from being a playa to becoming a dad (yes, he already feels like one) and more.” And on another post, she wrote, “Exes, current (and permanent) and future. @angadbedi gets.”

For the ones who don't know, initially, Angad and Neha along with their familes' had dismissed her pregnancy rumours. Angad had stated, “If someone wants to say something, I am not here to comment on anybody's statement. Everybody has a right to their opinion, I feel whenever we want to make anything public, we will as a couple- whether it's our personal front or professional work- whatever we want to share, we will willingly come forward and do that. We shared our wedding pictures but if we want to keep it private then that's how it will be done. It's not that we hid anything from anybody, we tweeted ourselves. There are certain calls that we should make as a couple and there are certain things as a family we want to keep private, we will keep private.” (Also Read: Neha Kakkar Gets Surprise On Valentine's Day, Her Reaction Is Unmissable As He Got Down On His Knees)

On the other hand, Neha's father Pradip Dhupia had then shared with Dainik Bhaskar, "No no. There is no such thing at all. Since the two got married early, people are thinking otherwise. But there is no such thing. People will keep talking about things and spread rumours as per their wish."

Didn't you guys love the way Angad wished his wife Neha on Valentine's Day? Raise your hands if you second us!