Kartik Aaryan turned 29 today. His rumoured fling, Ananya Panday wrote a cheeky message to wish the birthday boy. She posted a black-and-white picture of them with his 'focus on her'.

Bollywood has given us many films that we can watch on repeat a zillion times! Apart from the films, the fraternity has also given us our favourite stars, from whom we try to replicate their apparels and their mannerisms. And with stars, comes their love affairs, triangles, linkup rumours that we secretly love reading about. And this budding ‘love triangle’ brimming between Kartik Aaryan, Ananya Panday and Sara Ali Khan has made netizens confused about who’s dating who, who’s breaking up with whom and if something’s brewing in these three rising stars’ lives. (Do Read: Inside Helen's 'Amazing At 80' Birthday Bash, Salman, Arpita, Aayush, Sohail, Iulia Vantur Attend It)

While more details about this trio wait for you in the later paragraphs to come, take a moment to wish Kartik Aaryan on his birthday! The dapper Kartik turned 29 today (November 22, 2019) and for the same, he celebrated his ‘big day’ with his parents by his side. A surprise cake-cutting ceremony with his parents must have given Kartik, all the bliss that was required to make his day special. Sharing an array of pictures from the same, Kartik wrote, “Jab mummy-papa ne birthday pe surprise kiya.”

Admit it or not, as the clock struck midnight, we all have been doing to and fro on Kartik Aaryan’s rumoured flings, Sara Ali Khan and Ananya Panday’s Instagram profiles to see if they wished the birthday boy. While Sara is currently holidaying in New York with her girlies, Ananya is busy promoting her latest film, Pati, Patni Aur Woh with Kartik. Not only that, but the 22-year-old actress also posted a cheeky birthday wish for her ‘Tiki’ on his birthday. The same could be read as ”Your birthday, but “focus” is on me  juusssst kiddin, happy bday Tiki @kartikaaryan.” 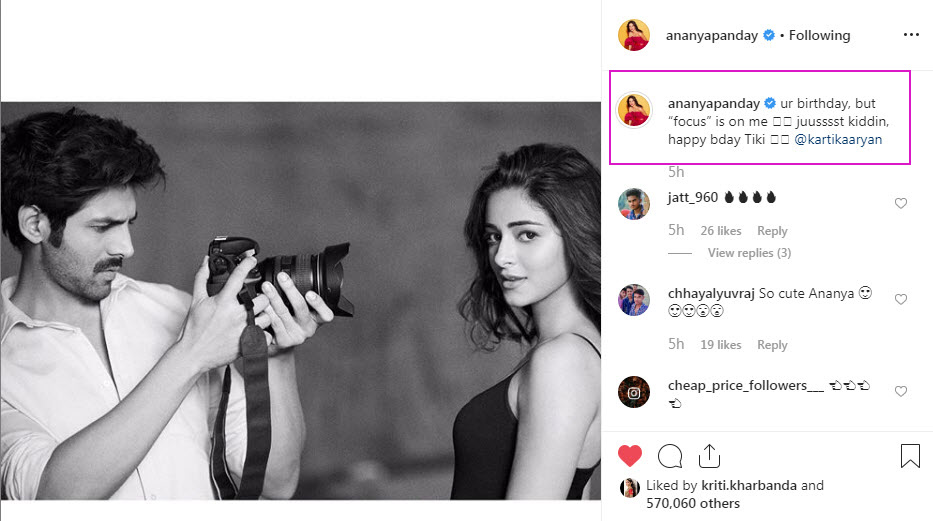 While that was about Kartik Aaryan and Ananya Panday, our hearts were shattered into little pieces when rumours all over had it that Kartik and Sara have broken up. As per reports, the duo was toiling hard to cull out time for one another amidst their hectic schedules. While Kartik is busy shooting two big-budget sequels, Bhool Bhulaiyaa 2 and Dostana 2, Sara is busy shooting for Coolie No 1. As per a Mumbai Mirror report, a source had shared that the duo had tried to the best of their ability to squeeze in some ‘us time’ post the wrap up of their movie, Aaj Kal. But what looked like it, things didn’t go as per plan and they have called it quits. (*silent sobs*!) (Must Read: Nazar Star Monalisa's Cake-Smeared Face With Hubby, Vikrant On Her Birthday Proves She Had A Blast)

In an interview with BollywoodLife, Ananya Panday was asked if dating rumours and votes pertaining to whom Kartik Aaryan looks better with (Sara or Ananya) annoys her. To which, she had shared, "No ya, I think he looks good with everyone. He is such a good looking guy. So yeah, it's cute. (But) who's voting for who? I'm not checking.” Ananya had also talked about working with her rumoured beau, Kartik. She had shared, "We shot three days in February, that was one short schedule that we did. But I’m going to Lucknow and I’m going for two months so, I’m super excited. I shot with him, I didn’t get a chance to shoot with Bhumi yet. But he is such a good actor, his command over the language is amazing so he improvises really well. And such a selfless actor, he thinks about how to make the scene better rather than just his own lines. Also, he is just fun to be around, just makes me laugh all the time." Mid-2019 was all about Sara Ali Khan and Kartik Aaryan and we would mostly not spot them without one another. With our entire focus shifting entirely onto Sara and Kartik, a Filmfare report that came during the same time had suggested that the latter's rumoured girlfriend, Ananya Panday wasn’t too happy with the Aaj Kal co-stars' closeness. Throwing light on the same, a source had revealed to the portal, “Sara and Kartik have got quite close to each other over the last few months and this has not been easy for Ananya as her relationship with him has just started. The two have been going through a rough phase as she does not approve of this growing friendship between Sara and him. Ananya has already tried to clear her issues with Kartik and they are trying their best to make it work.” (Also Read: Shilpa Shetty And Raj Kundra Head To Japan To Celebrate, Completes Ten Years Of Marital Bliss) 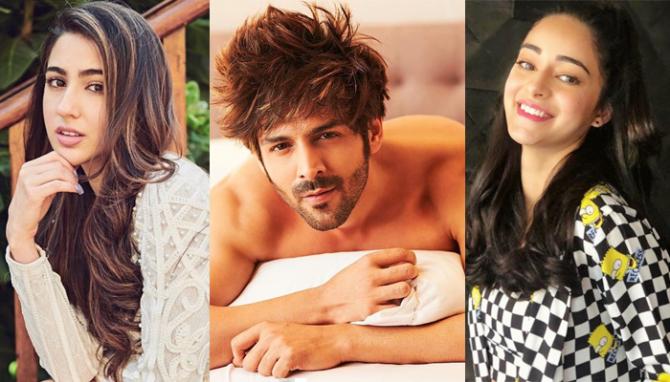 Kartik Aaryan and Ananya Panday’s dating rumours had started doing the rounds when they were spotted in the car, coming out of a dinner date. While Kartik had rubbished all linkup rumours with Ananya by saying, “People say all sorts of things if we have lunch or dinner together. It was just one dinner. I find it strange to read such things about myself”, Sara Ali Khan had an unmissable reaction on her crush’s dating rumours. In an interaction on Famously Filmfare, the Kedarnath actress was then quoted as saying, “I find Kartik cute. It's a Sara-Sara thing. So how does it matter if he finds some other person whose name starts and ends with A cute. That's good for him.”