Bollywood actress, Sonam Kapoor Ahuja's husband, Anand Ahuja has heaped praises on his 'saali saheeba', Rhea Kapoor for making it to the Forbes magazine's list of 'Ultimate 120'. Find out! 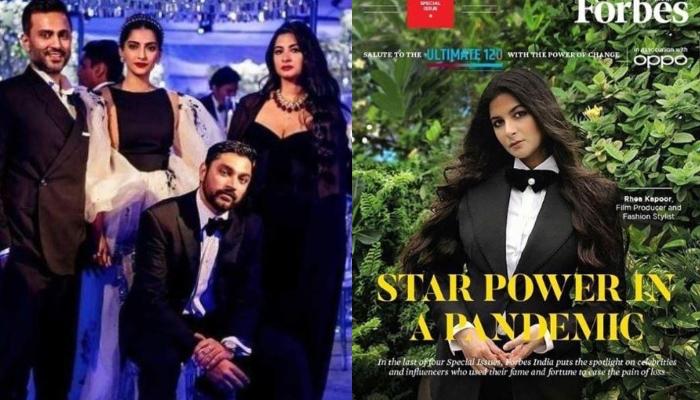 One of the most underrated names of the entertainment industry, Rhea Kapoor is the one, who had turned her sister, Sonam Kapoor into a millennial influencer. She is not just a style maven or another ‘Kapoor’, but she is the mind and soul behind some of the hit films such as, Veere Di Wedding, Khoobsurat and Aisha. Most of the times, she had chosen to stay behind the camera and let her other siblings conquer the world, but as we say, ‘A Queen remains a Queen, all it takes is a fight to win the title’. (Recommended Read: Samantha Akkineni Expresses Excitement For Rana Daggubati-Miheeka Bajaj's Wedding With Candid Photo)

Now, the young beauty has proved that she is the undisputed queen of style and inspiration in the entertainment industry as she has achieved a huge feat in her career. Scroll down to take a look! 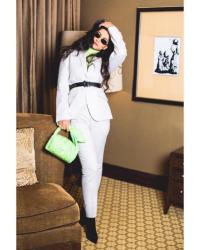 On August 7, 2020, Bollywood actress, Sonam Kapoor Ahuja's husband, Anand Ahuja took to his Instagram stories and shared his saali saheeba, Rhea Kapoor's post twice. The reason goes to the incredible achievement by Rhea as she has made it to the Forbes magazine's 'Ultimate 120' list. The doting jija ji, Anand Ahuja wrote 'boom' on the first story, while in the second one he tagged Rhea and put a hand-waving emoticon atop. Rhea has reshared her jija's congratulatory story on her Instagram stories, putting a 'family first' emoticon atop. Well, the inspirational lady received a lot of congratulatory messages from her friends and family. Take a look. (Don't Miss: Comedian, Sidharth Sagar Reunites With His Parents, Two Years After Accusing Them Of Harassing Him) 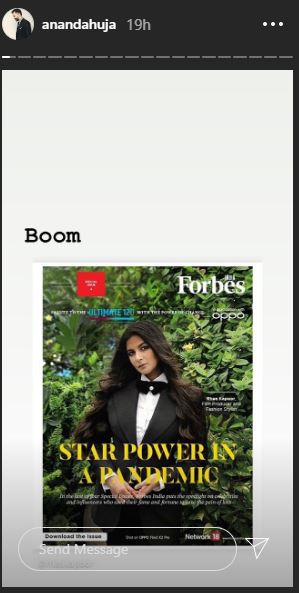 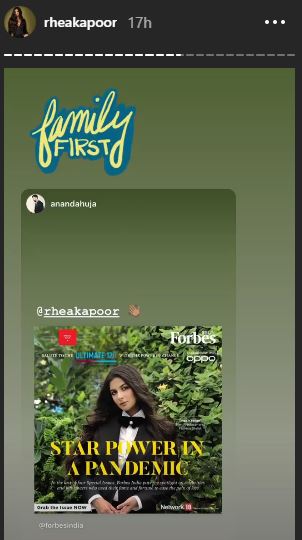 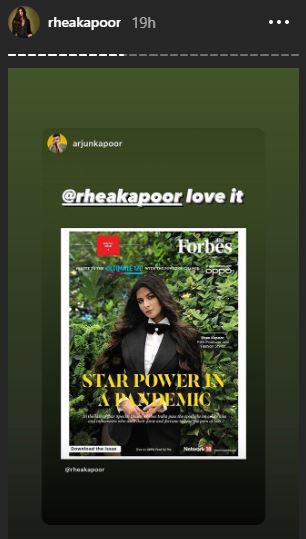 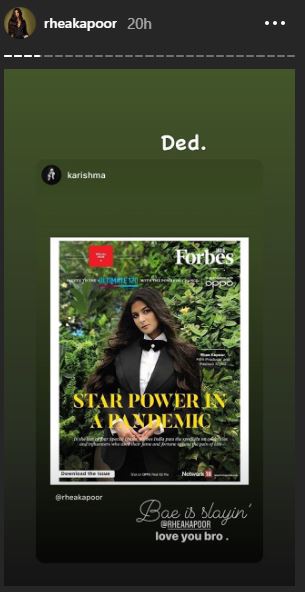 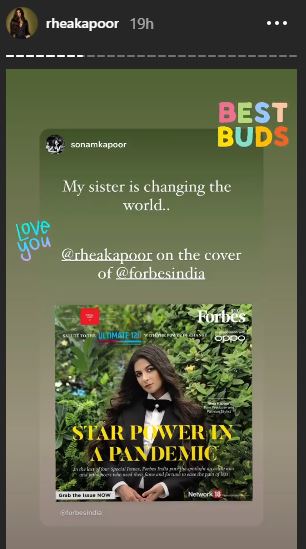 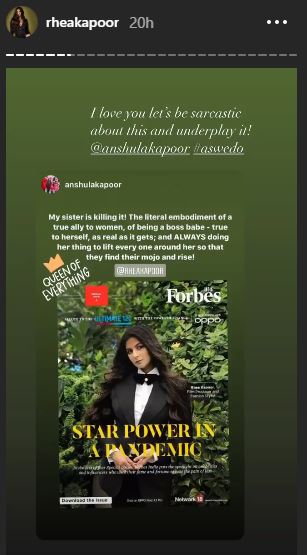 However, the most important and heartfelt wish came from the side of Rhea's doting father and actor, Anil Kapoor. The veteran actor took to his Instagram handle and reposted the poster shared by his daughter along with a heartfelt note, and it can be read as "This is just the beginning... here's to all the covers that you will be a part of in the future by the grace of God @rheakapoor." The happy daughter dropped a red heart emoticon on the comment from her father. Take a look. 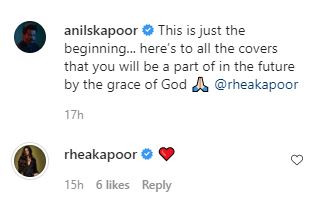 Well, there's no denying the fact that this achievement is surreal for Rhea and she has expressed all the emotions she is experiencing right now in her long note along with the photo. It can be read as "I am honoured to cover the @forbesindia #powerofchange issue for the month of August. Thank you so much to the team at @forbesindia @naandika_ We have been talking a lot about privilege and responsibility lately, in whatever way I can I want to use my platform as a producer, stylist, personality to empower as many women as I can to speak their truth and loudly wish their dreams into existence. I really do believe I wasn't put in this home, city or country just to do things the way they have always been done. I want to try to push myself and people around me to look at ourselves, and our world, differently. That has always been my endeavour, subconsciously at first, until I realised it was my purpose. Then we had the largest opening for a female-led film in HISTORY for Hindi films. Now it is my mission. I will try to do it to the best of my ability and try and delight and entertain people along the way for as long you all tolerate this less-famous sometimes awkward middle-child." The moment she dropped this post, tons of family members and friends dropped their congratulatory messages on her post. Take a look. 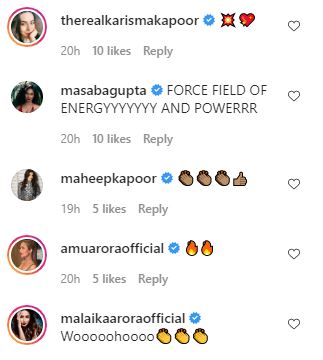 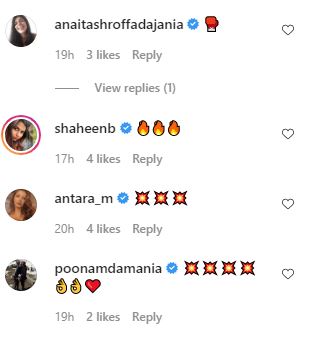 Talking about Rhea's personal life, then in an interview with Gaurang of Zoom TV, Sonam Kapoor had confirmed that her baby sister, Rhea is dating Karan Boolani. Not just this, she had even gone to add that it's been 10 long years that the two are seeing each other. When the journalist had asked Sonam, "Also, there are reports of Rhea getting married to Karan Boolani", she had replied, "Oh, no. When she does get married, I'll be very happy to tell you. They've been dating for 10 years, they've not gotten married yet. When the happy news is there, it'll all be announced. But, no, they are not getting married this year." (Also Read: Rhea Chakraborty Shares Photos Of The Only Two Properties Of Sushant Singh Rajput She Has With Her) 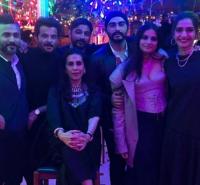 Congratulations to Rhea Kapoor for this fantastic achievement! 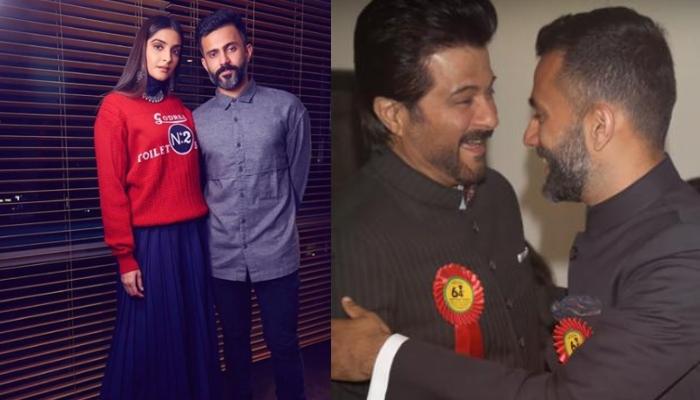 As we all know that rumours of the much-in-love couple, Sonam Kapoor and Anand Ahuja were doing rounds during their dating days. But none of them had accepted those rumours and had always refuted the speculations. The two had taken their love to the next level and had tied the knot on