He is the tall, dark, handsome actor from the Tinseltown. From being the fittest to being the most disciplined actor, this man never ever sacrifices on his routines no matter what. More so, this handsome hunk from Bollywood has a Padma Shri in his kitty, which was awarded to him in 2009 and in 2017, he had gone on to receive the prestigious National Film Sawardekar for Best Actor in the film, Rustom. Along with this, he also has many IIFAs, Stardust Awards and Filmfares on his ‘wall of fame’ shelf. When we call ‘khiladi’ and everyone would know that we are talking about none other than the very own and dashing, Akshay Kumar.

Apart from his professional achievements, Akshay has always scored full marks is his family life. Just like the way he is particular with his professional commitments, he makes sure that he spends ample amount of time with his family that constitutes his actress-turned-author-wife, Twinkle Khanna, their son, Aarav Bhatia and their daughter, Nitara. Along with constant family vacays, Akshay also believes in wishing his near and dear ones on their birthdays and anniversaries. (You May Like: Aamna Sharif Is Making A Comeback On TV As New 'Komolika', After Five Years Of Delivering Her Son) 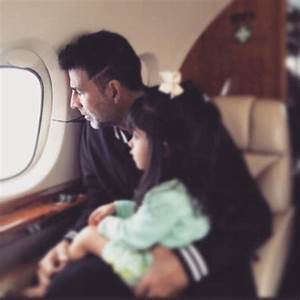 Similarly, yesterday (September 25, 2019), it was his darling daughter, Nitara’s birthday and the doting daddy made sure to shower her with Insta-wishes. Sharing an adventurous father-daughter moment, Akshay captioned his post as “She's happiest when she's in daddy’s arms and so is daddy, evidently. Wishing you all the happiness in the world always. Happy birthday darling, Nitara.” Take a look: Last year, on September 25, 2018, Akshay had shared a lovely snap with Nitara in a pool along with an equally lovely caption that could be read as “My Baby Girl, you have given me Love I didn’t know existed Please don’t grow up just yet I'm not ready for you to swim without me. Happy 6th birthday my Princess.” On the other hand, Twinkle too wished Nitara on social media and penned, "My little baby is growing up so fast. #Happy6th #birthdaygirl". (Also Check: Lucky Ali's Ex-Wife, Kate Elizabeth Hallam Spills The Beans On Her Divorce With Him) 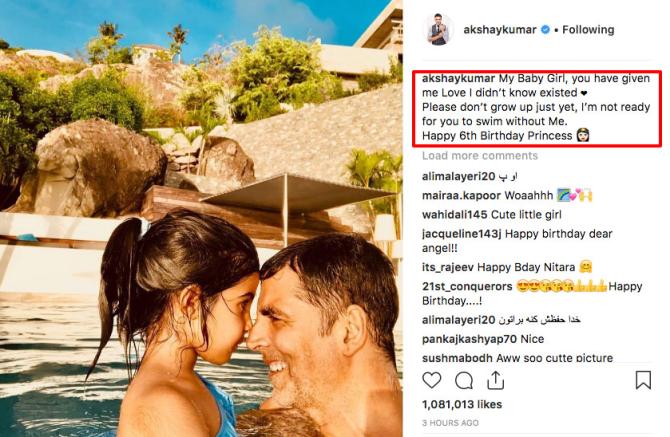 In a throwback interview, Akshay had candidly spoken about his kids and had retorted, “Whatever they get, they have to earn it. I want them to be responsible human beings who are also full of gratitude for what they have. Kuch khairat mei nahi milta, whatever they get is achieved by them, they need to understand that luxuries are a result of achievements and hard work.” Further illustrating his point, Akshay had gone on to add, “So, we decided to go on a family holiday and Aarav would travel business class. He is getting to travel business class because he worked hard to get his first-degree black belt (in kudo). If he hadn’t got it, he would have travelled economy. He has travelled economy on many occasions without cribbing because he understands that he needs to earn it, nothing is handed to him on a platter.” (Do Read: Amy Jackson Takes Her 2-Days Old Son, Andreas For His First Outing, Both Of Them Twin In White) 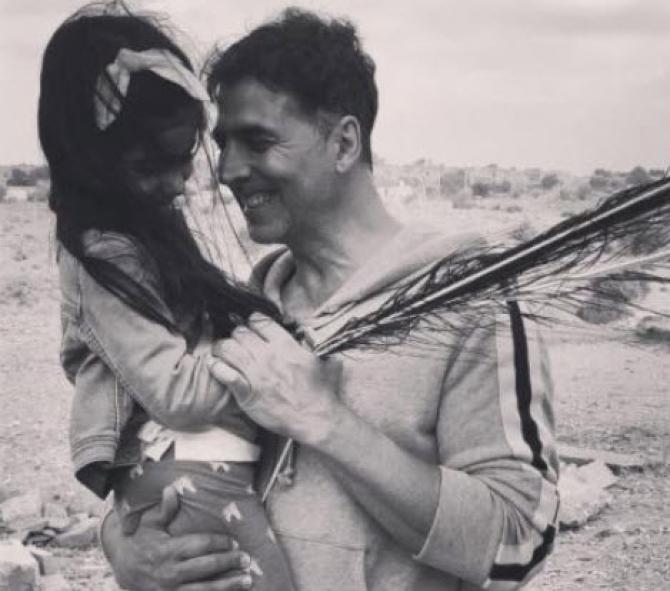 In an interview with the Hindustan Times, Akshay Kumar had revealed how Nitara reacts to being clicked by the media. He had shared, "It breaks my heart to hear my six-year-old daughter says she doesn’t want to come out to dinner with her family because the paparazzi will be there and she doesn’t like the flashing lights. Or Aarav not wanting to come for a movie because he just finished training and he doesn’t want to have to deal with people saying he looks tired or sweaty on Instagram and I really don’t blame them. Us as stars may have signed up for this but until our kids decide to be in any form of limelight after college years, then I don’t think they should be publicly followed or scrutinised, out of safety for them physically and mentally. Again, that’s my opinion and like I teach my kids, it’s your choice whether or not you choose to be offended by what others say." (Checkout: Hrithik Roshan Reveals He Broke 30000 Hearts After Marrying His Ex-Wife, Sussanne Khan)

Akshay Kumar's Son, Aarav Gets Trolled For His Walking Style As He Was Papped With Sister, Nitara 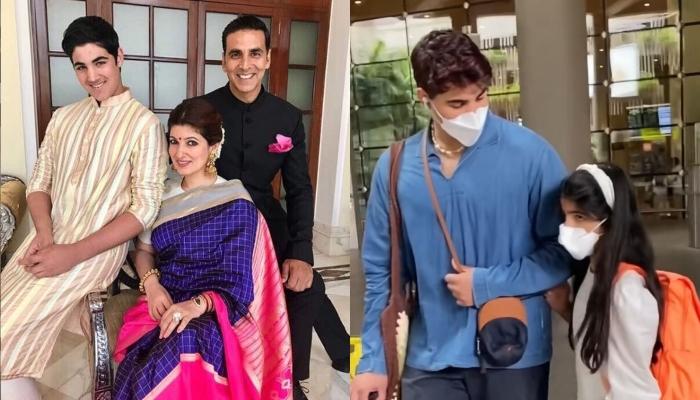 Bollywood's power couple, Akshay Kumar and Twinkle Khanna have been married for more than two decades, and they still make us drool over their camaraderie. The two are blessed with two kids, Aarav Kumar and Nitara Kumar. Being an avid social media user, Twinkle often shares glimpses of their happy married