Aamna Sharif Is Making A Comeback On TV As New 'Komolika', After Five Years Of Delivering Her Son

Aamna Sharif Is Making A Comeback On TV As New 'Komolika', After Five Years Of Delivering Her Son

The popular television serial, 'Kasautii Zindagii Kay' is soon going to have a new 'Komolika' and it is going to be played by Aamna Sharif. Scroll down to know more! Ekta Kapoor's Kasautii Zindagii Kay 2 has been gaining a lot of popularity, thanks to the protagonists, Parth Samthaan and Erica Fernandes. However, we cannot ignore the fact that this time the character of 'Komolika', played by Hina Khan had also gained its own fan club. From her big nath to her nikah, Hina has won millions of hearts with her performance.  (Recommend Read: New Mommy, Amy Jackson Is All Set To Marry Her Fiance, George Panayiotou Next Year)

And many hearts were broken when we got the news that Hina is not coming back as 'Komolika'. The producer of the show, Ekta Kapoor had confirmed the news with SpotboyE and had shared that because Hina is busy, she is not going to come back as Komolika. Now, the question is who will play the infamous antagonist.

According to a report by SpotboyE, Aamna Sharif, who rose to fame as Kashish in Kahiin Toh Hoga, is going to play the role. Yes, after five years of taking a sabbatical for her son, she is making a comeback on the small screen. The website reached out to Ekta and the producer spoke about it, and said, "Yes, we have selected new Komolika and she is someone popular and has played a lead role in one of my shows." (Also Read: Ranbir Kapoor Revealed How He Grew Apart From His Mom Neetu Singh Post Breakup With Deepika Padukone)

Ekta also talked about Hina's exit, and stated, "Hina Khan is busy with her life and she is doing a couple of other things too, so we couldn't adjust her dates. It was an amicable decision. Hina is a thorough professional. We will definitely collaborate with her on some other projects- be it TV or digital or a film.  She has been a revelation and this is not the end of our association."

Well, it will definitely be a treat to watch Aamna back on screen. In a 2014 interview, Aamna had talked about her equation with Ekta and had said, "I get asked this a lot! But honestly speaking, public and media perception aside, I have never ever felt disconnected with Ekta. My journey and popularity in television could not have been possible without Balaji and Ekta. And the fact that she asked me to do Ek Villain gratifies the mutual faith I share with Ekta till date."

For those who don't know, Aamna Sharif had gotten married to producer, Amit Kapoor, on December 27, 2013. In the year 2015, she gave birth to her son, whom she lovingly named, Arain. Aamna had worked in a few Bollywood films like, Aloo Chat (2009), Aao Wish Karein (2009), Shakal Pe Mat Jaa (2011), but failed to make a mark in the Tinseltown. (Don't Miss: Karan Veer Mehra Reveals His 'It's Complicated' Relationship Status, Talks About Life After Divorce)

Well, we cannot wait to get an official confirmation! What about you? 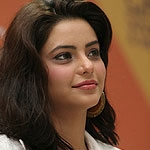