From fighting over little things to being partners in crime, this is the love-hate bond that a brother and a sister share. Their childhood is a constant struggle as to who gets all the attention at home. Though he might not always tell what you mean to him in his life, your wedding becomes the most difficult time for him to let you go. (Also Read: Isha Ambani And Anand Piramal's Engagement Party: Karan Johar, Ranbir Kapoor, SRK Attend The Bash)

The above-stated feelings are definitely rushing in Akash Ambani whose twin sister, Isha Ambani is all set to get married. India’s business magnate and Reliance Industries Chairman, Mukesh Ambani and Nita Ambani’s daughter, Isha Ambani got engaged to billionaire Ajay Piramal and wife Swati Piramal’s son, Anand Piramal. Isha and Anand will reportedly tie the knot in December 2018. Ambanis and Parimals hosted a post-engagement party for their friends from the business and film fraternity. 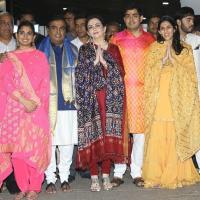 After Nita Ambani and Isha Ambani’s dance performance video on Nachde Ne Saare from Baar Baar Dekho and Mukesh Ambani and Isha Ambani’s dance on Dilbaro from Raazi, another video from the ceremony is going viral. We are talking about the video Akash Ambani’s emotional speech for his sister, Isha who will be getting married this year. Initially, he is a bit hesitant to start off and the camaraderie between Isha and Akash is too adorable to be missed. Akash very deeply explains the bond that the siblings share. Check it out here:

The Ambanis and Parimals have known each other for more than four decades, and Isha and Anand are friends for a long-time now. After a full filmy style proposal by Anand when he got down on his knees and slipped in an engagement ring in her finger, they went for a lunch with their families in Mahabaleshwar. (Also Read: Billionaire Anand Piramal Proposes Mukesh Ambani's Daughter, Isha Ambani In Totally Filmy Style)

And following the tradition of visiting the holy temple whenever they start something new, Ambanis and Piramals went to the famous Siddhivinayak Temple the next day. And then the post engagement party witnessed who’s who of the industry including Sachin Tendulkar, Shah Rukh Khan, Ranbir Kapoor, Karan Johar, Aamir Khan, Gauri Khan, Ayan Mukerji, to name a few. 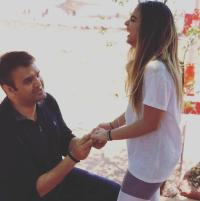 As per the reports, Isha’s twin brother, Akash too got engaged with his lady-love, Shloka Mehta on March 24, 2018, in Goa in the presence of their families. Post-engagement, Ambanis with their hone wali bahu went to Siddhivinayak Temple in Mumbai to seek blessings from the God. And on March 26, 2018, Mukesh and Nita hosted a star-studded post-engagement party for their son Akash and daughter-in-law, Shloka at their home, Antilia. (Also Read: Akash Ambani and Shloka Mehta's Post-Engagement Party Was A Star-Studded Affair) 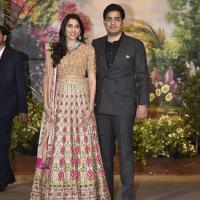 In an interview later, Nita Ambani spoke about her kids and said, “Mukesh and I as parents have given our children the freedom to choose their life partners. When my son decides to get married, to whoever it is, we are going to welcome him and wish him all the happiness in the world.” She further added, “I have known Shloka since she was four and we are all delighted to welcome her to our home and our hearts.”

Here’s wishing a lifetime full of happiness and love to Akash Ambani and Isha Ambani.