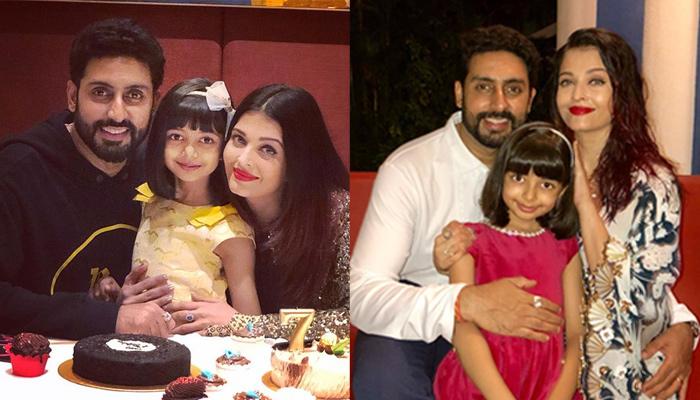 Every individual has their own unique way of celebrating lover’s day. Some may choose to devote the entire day with their loved ones, while others may choose to indulge in some ‘me time’ and some may like to not celebrate Valentine’s Day altogether! No matter what we or our peers do on this day, it is always interesting to note how our favourite celebrities are spending this special day. In the similar lines, we bring to you, an update on one of the ace Bollywood actresses, Aishwarya Rai Bachchan. (Do Read: Ranveer Singh Kisses And Hugs Deepika Padukone In Front Of Fans At 'Gully Boy' Screening)

Once ‘actress on the top charts’ to now being a doting wifey, dutiful daughter-in-law and a hands-on mommy, Aishwarya Rai Bachchan is a zillion goals in herself! From the interviews she gives, public appearances or walking on ramps, it is always about her family and daughter, who she always likes to keep on the forefront. Every single update about herself that the actress keeps her fans abreast through social media makes us go all ‘awww’! A recent family picture of the awesome threesome family of ‘A’, had the trio pose and be all smiles on New Year 2019. Sharing a picture of the same, the Kajra Re actress wrote, “HAPPY NEW YEAR ALLLLL…Happiness Love n Light…GOD BLESS.” Here’s the image:

Amazing, isn’t it? Over quite sometime now, Aishwarya and Aaradhya have been a victim of merciless trolls. A while back, the mother-daughter duo was trolled when Aaradhya was spotted walking hand-in-hand with her mother. In an interview, Aishwarya had a strong message for all her haters. She shared, “People will have an opinion. That's not changing what I'm doing na, how I'm taking care of my daughter in a public space.” And further stated, "Judge it. It's my daughter, I love her. I'll be protective or I'll be loving or I'll embrace her. It's my daughter and my life.” (Must Read: Ridhi Dogra-Raqesh Bapat, Post Separation Enjoy 'Night Routine' With Pals Sanaya Irani, Mohit Sehgal)

In a 2017 interview, Abhishek shared that he feels Aishwarya is a ‘supermom’ as she takes care of Aaradhya’s every need. He had said, “When she became a mother, her career took a backseat. Today, she does everything for Aaradhya. She is a supermom. Soon after Aaradhya was born, the media went at her about her weight gain. Nasty things were written, which really upset me.”

Further praising his wife and what leaves him charmed, Abhishek had shared, “Till date, people refer to her as the most beautiful woman in the world, and I know she is immensely grateful for the love. She values her fans and enjoys the adulation as well as the trappings of her career. Even with the hectic travel schedules and erratic work hours, I've never heard her complain about front or back of the plane, Maruti or Mercedes. Her focus isn't on the trivial. It's these things that leave me charmed”.

After the birth of her daughter, Aaradhya, Aishwarya had stated in an interview, “Overnight, we went from being dearest of friends to looking to being a couple and starting a family together, you know how quickly that happened.” She further spoke about Abhishek and added, “He’s a friend, companion, husband and a father, but I think the fact that he’s my bestest friend pretty much encapsulates it all. We are a very normal couple. Abhishek and I sometimes joke about being second siblings. We both share and talk a lot about what we are feeling. Sometimes, we have so much to say that we want to be the first to share it. So I have to say this first: we are both good listeners, but also extremely talkative.” (Also Read: Unseen Pics Of Taimur Ali Khan From Karan Johar's Twins Yash And Roohi Johar's Second Birthday Bash)

Speaking about Abhishek and Aishwarya’s relationship, they are one of the bests that you will find! At the India Today Conclave held on October 2018, the actor was all praises for his Mrs and praising her to the fullest, Abhishek was quoted as saying, “She is superwoman. She is unbelievably dedicated to all that she does.” He further added, “She has always been like that. Even when I worked with her at the start of my career, as a co-star, as a partner and then my wife. She is very focused about what she does as a professional and as a mother, as a daughter and as a daughter-in-law. She is 100% in everything I don’t know how she manages it.”

We totally agree with you, Abhishek! Guys, how do you like the picture of the A-trio’s V-day special picture? Keep us posted!