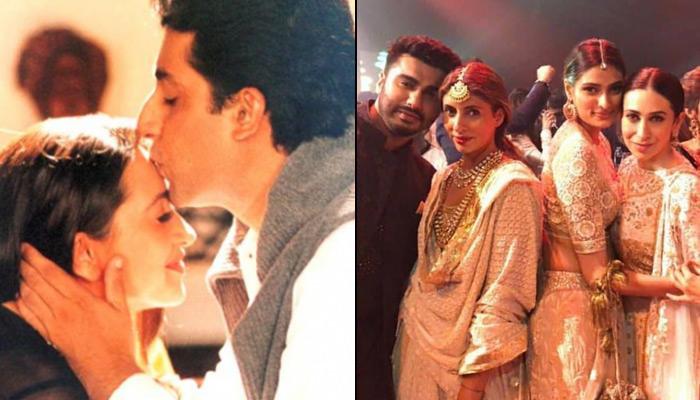 Bollywood industry is well-known for the glamour and fame, but it is much more than that. When we dig beneath its fascinating surface, it is all about the affairs, linkups, controversies, scandals and the unsolved mysteries. The world is not only obsessed with the Bollywood films, but also the glitzy lifestyle of their favourite celebrities.

It is quite evident that the Bollywood industry mainly revolves around two of the most powerful clans, the Kapoors and the Bachchans. The two royal families were about to convert their dosti into rishtedaari, with the wedding of Karisma Kapoor and Abhishek Bachchan. In October 2002, on Amitabh Bachchan's 60th birthday celebration, Bachchan and Kapoors pleasantly surprised everyone with the announcement of Abhishek and Karisma’s engagement.

But later in January 2003, the shocking announcement came from the families when the most-awaited wedding of the Bollywood film fraternity was called-off abruptly. While their fans were hoping that the first families of Bollywood would become one big happy family, everything went awry. The breakup announcement was made completely out of the blue, and the reason behind it is still a mystery! (Also Read: 9 Bollywood And Television Celebrities Who Were Engaged But Never Got Married To Each Other)

Now after more than a decade of their called-off wedding, Abhishek came under one roof with his ex-fiancée Karisma at Sonam Kapoor’s cousin, Mohit Marwah’s wedding. While Karisma and Abhishek avoided getting clicked together at the wedding, his sister, Shweta Bachchan Nanda’s group picture with Karisma circulated on the internet. Seems like Shweta had no qualms posing for a picture with her brother’s ex. Clearly, Shweta and Karisma have let bygones be bygones. 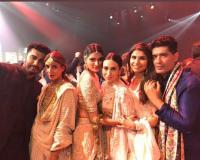 For the unfamiliar ones, Raj Kapoor’s grandson, Nikhil Nanda is married to the daughter of Amitabh Bachchan, Shweta Bachchan. And this is how the Bachchans and Kapoors are related to each other in the first place. It was Nikhil and Shweta’s wedding in 1997 when the sparks flew between Karisma and Abhishek, and soon they started dating. This much-in-love couple managed to keep their relationship out from the sight of the media glare, and five years later their love story caught the public eye. Meanwhile, the wedding bells were ringing for lovebirds, Karisma was quoted as saying, “It feels wonderful to be a part of this family.”

However, for them, the ‘wonderful’ phase got over quite soon and a few months later, they parted their ways. Though both the families have moved on over the years, the reason behind their split is still entangled. After the entire fiasco, the bunch of speculations and conjectures started doing the rounds of the possible reasons for their separation. In an interview, Abhishek’s mother Jaya Bachchan revealed that none of the families was responsible for the called-off engagement, and it was solely Abhishek’s decision. (Also Read: 15 Celebrity Ex-Couples Of B-Town We Wish Had Never Parted Ways)

But according to the umpteen media tabloids, there were other two different dimensions to this whole Karisma-Abhishek breakup. A lot of threads on Quora pointed out that the real reason behind the sudden split was none other than Karisma's mother, Babita. Having undergone a tough phase after separation with Randhir Kapoor, Babita single-handedly raised her daughters, Karisma and Kareena. She wanted a stable and secure life for her daughters.

Karisma made her debut in the Bollywood industry in 1991 with moderately successful film, Prem Qaidi, but her career took a turning point and she rose to fame with 1996 blockbuster romance Raja Hindustani. On the other hand, Abhishek made his on-screen debut with Refugee opposite Karisma’s sister, Kareena in the year 2000. While Karisma was a rising star in her late nineties, Abhishek was nothing more than Amitabh's son. In addition to the huge career difference between Karisma and Abhishek, the Bachchan family was undergoing a rough patch with financial losses and debts, courtesy a failed production house and Amitabh’s deteriorating career. Babita was not sure of Abhishek’s credibility in the industry, and she asked for a prenup in which Amitabh will have to transfer a particular proportion of his wealth in the name of Abhishek. This will financially secure her daughter’s future in the Bachchan household. This condition was not accepted by Amitabh Bachchan, and because of this, the wedding was called off.

The other lookouts to the reason behind this breakup were Karisma’s resistance to move into the Bachchan house, Jaya Ji’s dominating influence over her son, Karisma being asked to discontinue her acting and Babita’s interference in her daughter’s life. All in all, the heartbroken couple, Abhishek and Karisma had to sacrifice their love to please their respective families. But time flew, and the couple has moved on in their respective lives. Despite a broken engagement and a failed marriage, Karisma is happy with her two kids, Kiaan Raj and Samiera. And Abhishek, on the other hand, is happily married to Miss World Aishwarya Rai Bachchan, and the couple welcomed their darling princess Aaradhya Bachchan in March 2012.

We wish Karisma and Abhishek all the happiness in the world and success in their future endeavours.