Sonam Kapoor’s cousin, Mohit Marwah and his long-time girlfriend, Antara Motiwala got married on February 20, 2018, at Waldorf Astoria Ras al-Khaimah in UAE. After a dreamy three-day-long pre-wedding celebrations, the couple finally tied the knot in an equally star-studded affair. From star family members like Sonam Kapoor, Arjun Kapoor, Boney Kapoor, Sridevi, among others to biggies of Bollywood like Karan Johar, Manish Malhotra; Mohit and Antara’s wedding ceremony couldn’t have been more starry and glamorous.

Speaking of the industry members, one of them stole the limelight like nobody did. And it’s not someone you would expect to be party animal at all. Still guessing? Well, we’re talking about Jaya Bachchan. Yes! Jaya Ji was seen shaking her legs on the famous Hindi song, Husn Hai Suhana, during the Antumoh’s sangeet ceremony. #Antumoh, for those of you who do not know, is the trending hashtag that went viral during Mohit and Antara’s wedding functions. Now, the best thing on social media and internet today is to see Jaya Ji dancing. So, without further ado, let’s watch Jaya Bachchan shaking her legs during Mohit and Antara’s sangeet ceremony:

Isn’t this surprisingly cute? Take a good hard look at Jaya ji dancing. It’s not every day you witness this spectacle, right? This is amazing and is sure to bring a smile on your face! Now, as far as Mohit and Antara’s wedding is concerned, the couple will soon host a grand reception party in Mumbai on February 26, 2018, for their industry friends.

Another sweet gesture which will burst your heart with emotions is Mohit’s cousin, Sonam’s message for her bhaiya. She took to her Instagram handle, and posted the entry picture of Mohit and Antara, and captioned it beautifully, “When your brother gets married to your oldest friend! Antu (Antara) you were always family and now it’s legal! I love you guys! Bhaiya (Mohit) you are the kindest and sweetest person in our big Punjabi family and you deserve all the happiness the universe can provide! Have the best life #antumoh and I’m so excited for this new journey to begin for both of you!” Check out the beautiful picture: 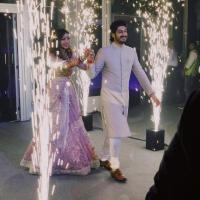 For their wedding, Antara wore a beautiful Manish Malhotra ensemble and Mohit looked dapper having donned a sherwani. For the sangeet and cocktail ceremony, Antara’s outfit, in Manish’s words, “The beautiful bride @antara_m wearing custom-made chikankari lehengaa teamed with Floral Artwork and pearls. Soft colours with the happiest vibe makes her the very cool.” 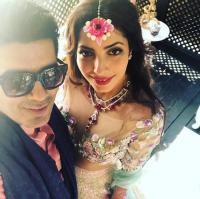 For those of you who do not know, Mohit has acted in films like Fugly, Raag Desh and Hate Story 4, and Antara is a fashion stylist by profession. Mohit also happens to be the son of Sandeep Marwah who founded Noida Film City, a media hub in Noida. As far as the relationship with the Kapoors is concerned, it must be mentioned here that Mohit’s mother, Reena Marwah, is the real sister of Anil Kapoor, Sanjay Kapoor and Boney Kapoor.

So, here we’re! Did you like Jaya Bachchan’s dancing video on Mohit and Antara’s sangeet ceremony? Do let us know in the comments section below. Also, a very happy married life to Mohit and Antara.

Next Read: Shoaib Ibrahim And Dipika Kakar Finally Get Married In A 'Nikah' Ceremony, Pictures Inside!