Weddings always make us feel an adrenaline rush inside our body! Be it weddings at our home or celebrity weddings, we can’t wait to catch a glimpse of the bride and quickly make a head-note on if there are any additions or subtractions that we need to make to our wedding dress!

By the way, do you feel that a bride should always wear whatever she has on her wedding; and only that will make her look gorgeous? We hope not! These days, the minimal is the maximum. While it is your day and you have the right to decide how you will look on your wedding, but can you give it a thought to keep it as simple as possible, which will make you one of the most beautiful bride that the world has ever seen! Don’t believe us? Take a cue from these celebrities who decided to keep it extremely simple at their wedding but can be counted as the brides who will make herself remember for a long time! Jaya Bhaduri, now known as Jaya Bachchan was counted as one of the best-looking actresses of the 70’s. Jaya got married to Bollywood superstar, Amitabh Bachchan in 1973 and looked every bit of elegant in her minimal bridal avatar. For her wedding, Jaya chose to sport a red bridal saree, red bindi, traditional Indian wedding jewellery which included a beautiful matha-patti. The ‘Dream Girl’ of Bollywood still manages to slay it big time in her late 60’s. So just imagine the killer kind of beautiful she was in her times! Hema got married to her co-star and long-time beau Dharmendra. Hema kept it as minimal as possible on her wedding. For her ‘big day’, Hema wore a saree with bangles, minimal jewellery and a neatly tied puffy bun. 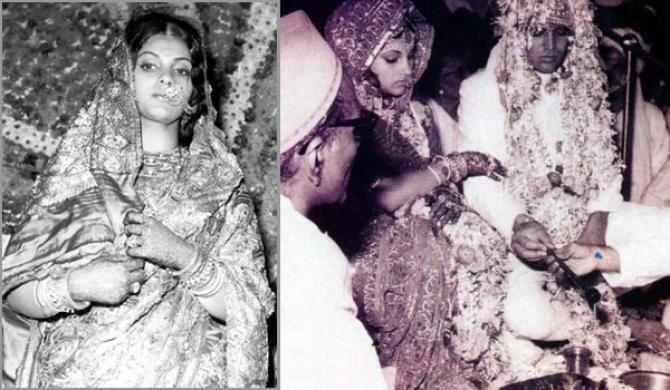 Bobby girl, Dimple Kapadia married quite early in her life. The cute teen got married to Bollywood heartthrob, Rajesh Khanna. Dimple kept it extremely simple on her wedding day. The actress wore a gorgeous saree, with pallu on her forehead. Her mehendi clad hands and stunning nath made her one of the most simple and beautiful brides ever!

Must Read: At The Age Of 16, Dimple Married 31 YO Rajesh But Soon Their Marriage Was Over Because Of This Diva 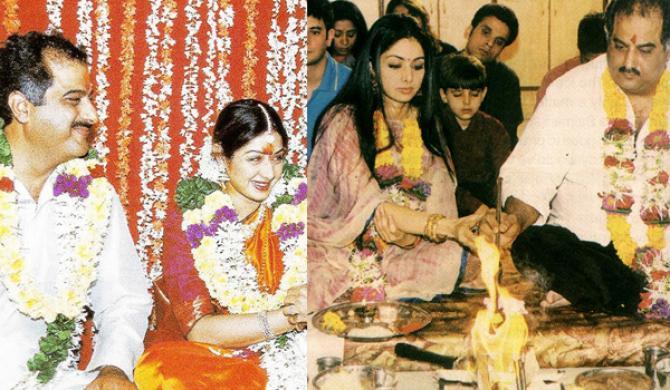 The late Sridevi’s hubby, Boney Kapoor, had time and again shared that he had fallen for her, the moment he saw Sridevi. And why wouldn’t he? Sridevi had stolen the hearts of millions with her one look and smile! And now with Sridevi dressed as a bride, you would be mesmerised to see that how can one look so beautiful by being so simple! On your left is an image from Sridevi and Boney Kapoor's wedding. Checkout Sridevi, dressed as a South Indian bride, donned in a bright saree, minimal jewellery, maang teeka, red lips and the most important, the bubbly smile which had made Boney fall flat for her. Kajol is known for her phenomenal acting and free-spirited, fun nature. The Kuch Kuch Hota Hain actress got married to Ajay Devgn in a traditional Maharashtrian wedding and looked every bit of stupendous in her Maharashtrian bridal avatar. Kajol chose to let go of heavy makeup and kept it simple and to the necessary on her wedding day. She wore a green saree, a look that she completed with traditional bridal jewellery of the region, along with a nath, green chooda, and vaaki (armlet). Simple yet drop-dead amazing! 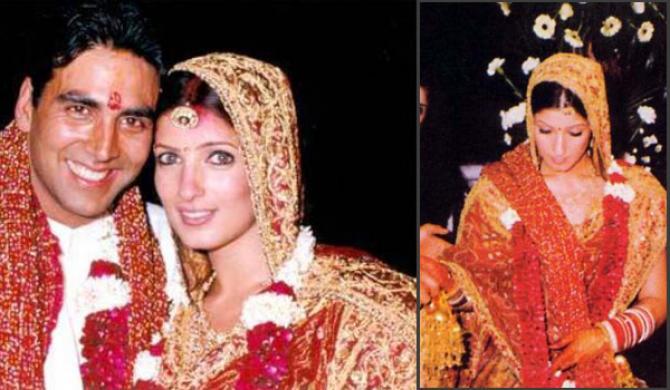 Quite like her mommy, Dimple Kapadia, Twinkle too, chose to do away with extravaganza and let the ‘simple yet elegant’ funda play the game. The actress got married to the handsome hunk, Akshay Kumar, in 2001. For her wedding, Twinkle stuck to a bride's favourite colours- red and gold. She kept her bridal avatar minimal with very simple jewellery, and just a statement Jaipuri pattern maang teeka which stole all the limelight. 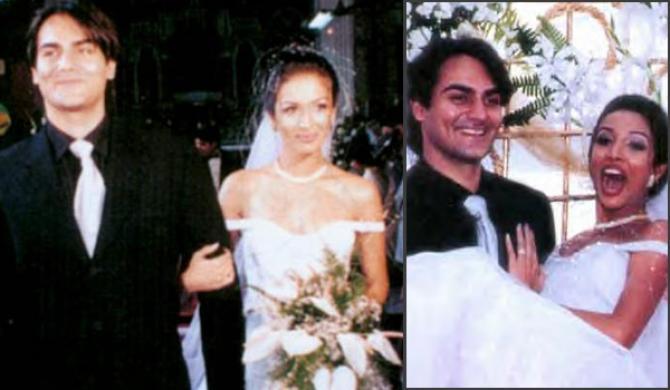 The actress who is becoming hotter with each passing day, managed to looked every bit of beautiful on her wedding day. The actress donned the look of a beautiful Christian bride and we leave it up to you to understand if anything could be simpler and ravishing! Malaika, on her wedding, chose to sport an off-shoulder wedding gown, with a plunging neckline. The simple string of pearls added the correct amount of oomph-factor to her look. Known for her super-impressive personality and choosy roles, Konkona looked no less than an angel on her wedding day. The actress, who can just kill with her smile, chose to keep it as simple as possible on her ‘big day’. Konkona chose to be in an all-golden avatar as she sported her grandmother's traditional gold jewellery, which further added to her golden attire. 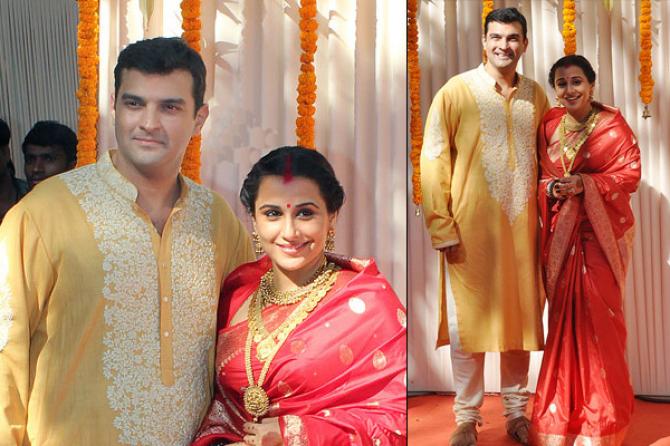 One of the most talented and beautiful actresses of tinsel town, Vidya Balan got married to Siddharth Roy Kapur at a low-key wedding. Vidya is known for her beautiful saree collection and one cannot expect her to wear anything but saree on her wedding day and give goals to many. Vidya’s designer friend Sabyasachi, created a red and gold silk saree for her. Her exquisite gold jewellery was designed by Amrapali, which further complemented her saree.

You May Like: The Endearing Love Story Of Vidya Balan And Siddharth Roy Kapur 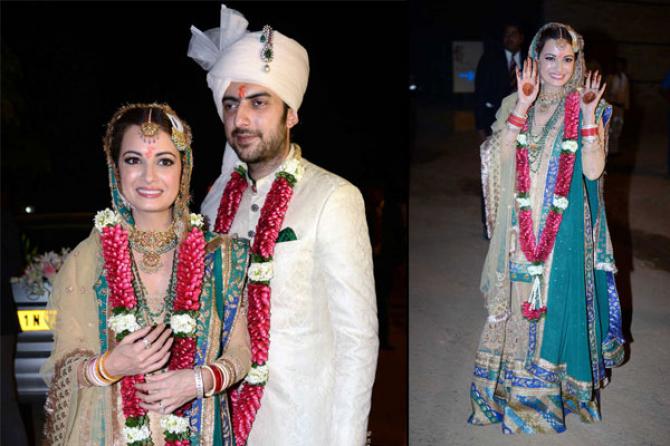 A pretty and fresh face after a long time, Dia Mirza’s entry into Bollywood took the industry by a storm! The actress got married to her long-time beau, Sahil Sangha in a traditional Arya Samaj ceremony. Why she was chosen in this category is something that we don’t need to say, but we still will! Dia chose to wear a sharara designed by Ritu Kumar. Her chooda, minimal jewellery and ethnic maang teeka was her look’s highlight. Plus, not to forget, the 24-carat smile on her face! Manisha’s smile can still kill millions! One of the most wanted actress of the 90’s by directors, Manisha tied the knot quite late in life. The only thing that Manisha kept a little bright was her saree. Apart from that, Manisha’s had a traditional Nepali wedding where she chose to go for a red saree, minimal makeup and jewellery and their traditional dubo grass garland. Could anything be more simpler and beautiful? Kalki is one of the most promising and versatile actresses of Bollywood. Her name in the list must not have come as a surprise to you as you always see Kalki with almost little or no-makeup and always sporting the minimum. And there was no exception when it came to her wedding as well. Kalki looked serene in a white saree which had a red border. She kept it extremely simple with small golden jhumkas, a necklace and a huge mogra garland.

Checkout! Bollywood And TV Divas Who Flaunted Intricate Yet Trendy Mangalsutra After Their Wedding If we had run a contest on who was the simplest bride, Minissha would have surely won the award! The Bachna Ae Haseeno actress got married to her long-time boyfriend, Ryan Tham, in a city court in Mumbai. Minissha wore a pink top and jeans on her marriage registry! Can you believe that? So cool! People saw her lehenga avatar in her post-wedding lunch, on which the actress donned an orange attire with bare minimum jewellery. 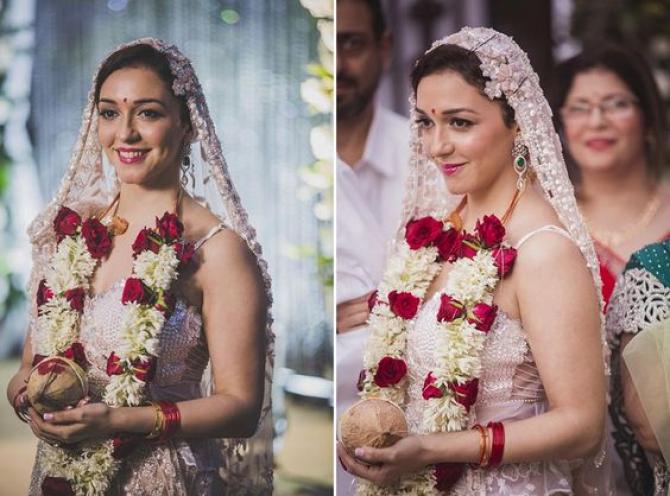 This is so beautiful, so simple and so classy! Just Mohabbat fame Nauheed Cyrusi got married to her long-time beau, Rustom in 2017. Nauheed didn’t need to put on anything extra to add to her already beautiful self! The actress had a Parsi wedding where she killed it in a blush-toned saree with embedded pearls and intricate Swarovski crystal panelling. Nauheed didn’t wear any necklace, as she let the natural rajnigandha and rose garland added to her dress and beauty. Her hair was neatly tied up in a bun and she wore a few red bangles which made her look like a queen. On her wedding day, Sagarika proved it to all that ‘less is indeed more’! Sagarika chose a ravishing red silk saree, which she teamed with a heavy embroidered blouse. She paired her saree with silver jewellery, mangalsutra and typical Maharashtrian green glass bangles which made her appearance distinguished. She too sported a no makeup look and her hair was tied up in a neat bun. A red bindi further accentuated her bridal look.

Do Read: The 'Less Is More' Bridal Looks Of Actress Sagarika Ghatge Is An Inspiration To All Brides-To-Be

Hence, proved! Well, well! Isn’t this one heck of beautiful? See, how one can look her best on her wedding day by choosing to make the most out of ‘minimum is the new in’ look. What plans do you have for your wedding attire? And, whose minimal wedding look did you like the most? Do keep us posted in the comments section below!