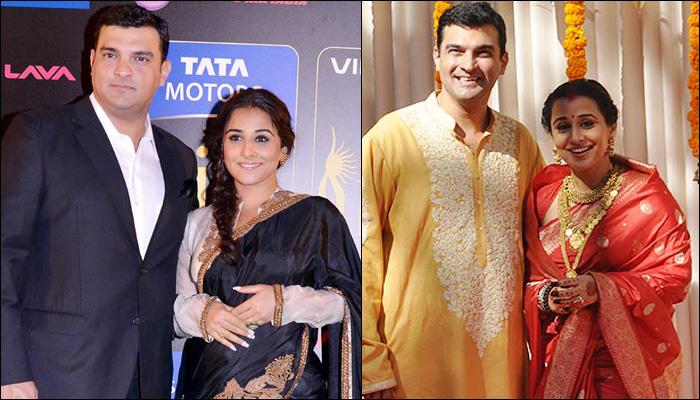 The lady who has won a National Film Award, five Filmfare awards, five Screen Awards and even has a Padma Shri, shocked everyone by tying the knot when she was at the peak of her career. But, she never let her marriage stop her from working in full force. (READ: Top 10 Actresses Who Left Bollywood After Marriage). Yes, we are talking about the very bold, Vidya Balan, who married Siddharth Roy Kapur, businessman, film producer and managing director of The Walt Disney Company, India. Their love story has been very humble, where a girl who was apprehensive about losing her identity after marriage, found someone who understands every fibre of her being.

Recommended Read: 5 Reasons Why Indian Couples Must Have A Photo Booth At Their Wedding

The love story of Vidya Balan and Siddharth Roy Kapur

When Vidya was finally emotionally ready, after feeling a little pressurised about marriage, Siddharth walked into her life. She was standing at the backstage of Filmfare awards when she met her future husband, Siddharth.

Later on, it was the cupid of Bollywood, Karan Johar, who arranged a meeting for the both of them. Karan, being their common friend, knew that they are good for each other. In that first meeting, they became good friends, and that was the start of a potential love story.

Must Read: The Love Story Of Dia Mirza And Sahil Sangha That Turned Into A Fairytale Wedding

Since Vidya is a famous name, and so is Siddharth, they could not go out much. They took advantage of this fact and talked a lot to each other about everything. This habit of sharing things with each other brought them closer, and helped them to have a better understanding of the opposite person. These two were very comfortable with each other, and could have gone living exactly like this for years. It was only after Siddharth proposed that Vidya thought about how serious it was. Vidya said:

"When Siddharth proposed, I couldn’t believe it initially. Since we were together, I knew we would talk marriage at some stage. And then, he popped the question and did not even wait for a reply. It was taken for granted! I could have gone on living without marriage, but I do not believe in live-in relationships because it may be difficult when you want a child. When he proposed, I was like, “Okay, so now we need to talk about it."

The Punjabi bahu and the South Indian damad

The wedding of Vidya Balan and Siddharth Roy Kapur was coming together of two different wedding traditions, as Vidya Balan is a South Indian while Siddharth Roy Kapur is a Punjabi. The couple decided to get married by following the rituals from both the cultures. Their wedding was a low-key affair where there were no Bollywood biggies present. Only the close friends and family were there.

Followed by a quiet pre-wedding bash and mehendi, was the wedding. The venue was Green Mile bungalow in Bandra, Mumbai. And, the bride and the groom looked elegant in their understated attires. Vidya called her friend, designer  Sabyasachi, who created a red and gold silk saree for her. The jewellery was designed by Amrapali. Roy Kapur donned a light mustard kurta with Lakhnavi kadhai.

It is often observed that the career of an actress nearly dies when she gets hitched. The roles that they get are not satisfactory enough. Even in general, it is the girl who has to make various sacrifices in order to adjust with her in-laws. Luckily for Vidya, none of this was an issue. Things changed for the good for her. As Vidya mentions:

"Because we do not live in a joint family, we do not come in each other’s spaces. I have gained a family, and so has he. My father-in-law is the most accepting person. They say a girl always looks for her father in her man. I will add that I have that even in my father-in-law. My mother-in-law is a professional, she is encouraging and enthusiastic. In a joint family when you share the same space or kitchen, it can become contentious. But, there is no scope for that with us."

From an actress' perspective, things have been pretty easy for her. She married a man from the same industry, who understands how demanding this career is. Siddharth has never interfered in Vidya's career decisions. He has always been supportive of her.

Yes, you can have the best of both worlds, career and a happily married life. Here are 5 Super-Cool Benefits Of Marrying A Woman With A Career

"I would not like to limit myself in any way. I was and will always be an actor. I am grateful to God that I have a partner who understands that. I did The Dirty Picture after Siddharth and I got together."

When you have an understanding partner, the transition from being a single girl to a wife becomes easy. In the same manner, Siddharth also simplified things for Vidya:

"Siddharth accepts me the way I am. In the first few months of marriage, I got bogged down by the notion that I had to juggle between handling home duties and starting work on a new film. He explained I need not be a superwoman. He understands that if he could go out to work and end up neglecting things at home, so could I."

Recommended Read: 6 Beauty Hacks That Will Make You Shine Like A Diva On Your Wedding Functions

Vidya found a man who is mature enough to understand her career, and who gives her ample space. Siddharth too found a woman who is honest, independent and deep enough to realise that she has a duty towards her career as well as her family. We wish this couple all the luck, and hope that their love grows stronger with time.