Yug Devgan Turns Photographer For Mom Kajol Devgan, He Is Outstanding At His Job (Pic Inside)

Yug Devgan Turns Photographer For Mom Kajol Devgan, He Is Outstanding At His Job (Pic Inside)

Kajol and Ajay Devgn make one of the strongest couples from Bollywood. The two are blessed with two kids, Nysa and Yug. Here's how Yug shows his photography skills as he clicks his mom! 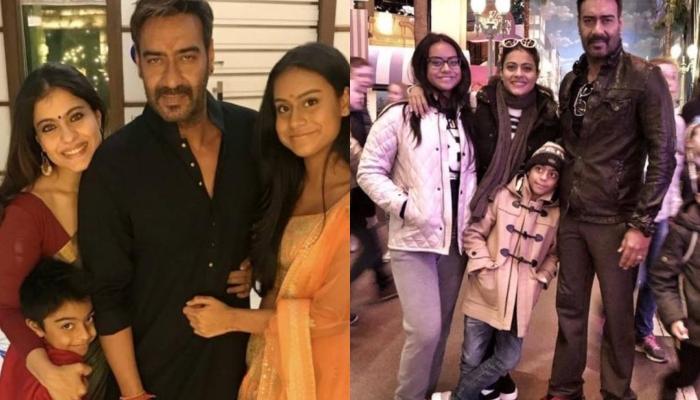 They are one of the most sought-after couples from the tinsel town. The idiom “opposites attract” fits this couple completely as they are two completely different human beings when it comes to their nature. Nonetheless, the spark and love are always alive and that can be seen in their interviews. Any guesses as to whom we are talking about? Well, it’s none other than the angry young man, Ajay Devgn and his vivacious actress-wifey, Kajol Devgan.

It’s been more than 19 years that the lovebirds have been married, and their relationship is only growing stronger with each passing day. Kajol and Ajay are parents to two kids, Nysa and Yug. Not just the celeb couple, but their kids are often under the radar. While Nysa is often targeted by social media trolls, Yug steals the show with his unusual antics. (You May Also Like: Priyanka Chopra Is All-Praises For Hubby Nick Jonas, Calls Him Old Soul And Says He Is Supportive)

Lately, Yug was in the news for teasing the media at the airport. While the lovely family was getting papped by the media present there, Yug out of nowhere started making funny faces at the media. To this, Kajol and Nysa instantly went like, “Yuggggggg.” And soon his video went viral and people were talking about his naughtiness. (Checkout: Milind Soman's Wife, Ankita Konwar Raises Her Oomph Factor In A Sizzling Bikini, Looks Stunning)

And now, to everyone’s surprise, this kiddo is a perfect artist and has turned a photographer for mom, Kajol. Yes, that’s right! The 8-year-old lad is a fantastic photographer. Sharing the below dreamy click, doting mommy revealed that the picture is clicked by Yug. Kajol captioned the snap as, “Yug Devgan at work again.” Here is the picture that we are talking about:

On September 13, 2018, it was Yug’s eighth birthday and both his parents took to their respective social media handles to wish him. Kajol had written, "Happy birthday to me..all of eight and growing more everyday. Love u to the moon and back my sweet boy!" Ajay, on the other hand, had written, “Eight complete. On my way to nine! Thank you for all your love." (Also Read: Neha Kakkar Shares Insta-Story On How A Guy Should Treat His Girl, Post Breakup With Himansh Kohli)

Ajay Devgn is a complete family man and we all know this. In an interview with the IANS, his co-star, Ileana D'Cruz had revealed, "He's a massive family man. He's obsessed with his kids, which is very lovely. He's really a positive person. When you are working with likeminded people then there are no pretences. So, it's nice working with him.”

Kajol and Ajay Devgn have admitted to fiercely shielding their children from the media glare. Kajol had said this previously, "Ajay and I consciously chose to keep kids away from media. Keeping them away from the spotlight at large is an attempt to give the children their space where they are not bogged down by any kind of pressure.”

During a session at NDTV’s special youth conclave, Kajol had revealed, “I’m a Hitler mother... I’m a bad cop, Ajay’s a good cop... But the percentage of the good cop has dropped in him. He has realised that it is necessary to be a bad cop sometimes. That he can’t always look at the mother to say ‘no’. I’m 30 per cent bad cop, 70 per cent good cop.” (Do Check: Esha Deol Flaunts Her Baby Bump During An Ad Commercial, Radhya Takhtani Joins Her On The Sets)

What a lovely click by Yug! What do you have to say about is photography skills? Let us know!