Dharmendra's 'chakki peeecing' dialogue was an unforgettable piece. Here is a throwback video, wherein the actor showed his unique way of while working out and recreated the dialogue!

The iconic actor, Dharmendra has been a heartthrob to his millions of fans for his charismatic personality and miraculous acting skills. He has given some marvellous dialogues in his films, which is simply worthy of time. One such iconic Chakki peeecing dialogue from the super-hit film, Sholay is an unforgettable piece for his massive fanbase. Thus, here is a throwback video, wherein the actor showed his unique way of working out and had also recreated his Chakki peeecing dialogue.

Upon scrolling through our social media feeds, we stumbled upon a beautiful video once shared by the veteran actor, Dharmendra. In the video, he was seen cycling while grinding flour. It was a beautiful instrument which was attached to a grinding machine. The evergreen actor looked handsome in a white tracksuit paired with matching coloured sneakers and a black cap.

Recommended Read: When Sharmila Tagore Revealed How Rajesh Khanna Decided To Take Part In Fewer Movies With Her

The video was simply an alternative choice of the actor for grinding flour in a modern style. In the video, Dharmendra was also heard saying, "Pees raha hoon. Exercise ke baahane hai, karte rehna chahiye". Along with it, he had also penned a hilarious note which was nothing but his iconic dialogue from the film, Sholay. However, at the end of his note he also revealed how much fun he had while recreating his dialogue and penned: For the uninitiated, in the film, Sholay, Dharmendra had delivered this Chakki peeecing dialogue when his on-screen lover, Hema Malini's aunt was disagreeing to his marriage with her niece. He had then climbed up on a water tank to convince Hema's aunt. In the same scene, he had also mentioned that otherwise, he would jump from there. Then he had delivered this dialogue which became one of the most cherished dialogues over time. In the film, he had said: 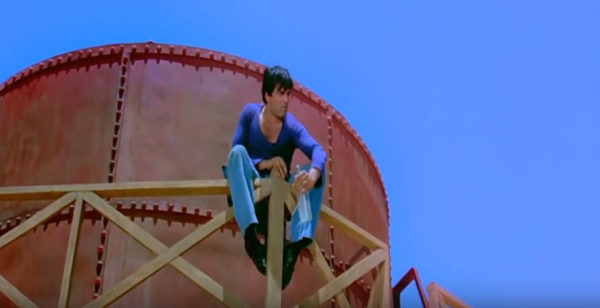 Well, we are already stunned by Dharmendra's unique style of working out! What about you? Let us know!

Next Read: When Divya Agarwal Threatened Ex-Beau, Varun Sood For Expressing His Love For Her On National TV