Bollywood actresses manage to make a style statement out of everything they wear. Be it their casual look, a red carpet or party look, a launch event or an airport look, they manage to turn heads and make the news. So why would it be any different when it comes to their wedding looks? Well, because they have such a huge fan following and they are who they are; they also sometimes have a pressure to look their very best.

But whether it is by pre-planned efforts or just by fluke, they manage to make themselves the talk of the town. So here is a list of ten such brides who gave us some cool ideas for their weddings that are totally steal-worthy!

The Bengali bombshell, as she is popularly known, broke a million hearts when she announced her 'monkey wedding' to beau Karan Singh Grover. While the nation was busy judging his third marriage to the actress, she was busy giving millions of brides style inspiration for their wedding with the major focus being her traditional Bengali red bindi. Apart from the wedding where she wore a traditional red lehenga, for the other functions, she chose beautiful pastel shades that made their summer wedding so much cooler!

Talking about the epitome of elegance and grace, it would be unfair if we didn’t mention this beautiful diva in the list. Not only did she ditch the traditional red and maroon that are wedding outfit musts, but she also rocked the outfits that she chose instead. She wore an intricately done Hyderabadi green outfit by Ritu Kumar for her wedding, and for her reception, she chose an elegant yet stunning gold lehenga by Shantanu and Nikhil. Another high point of the wedding was the limited guest list yet cosy lavish wedding.

Yuvraj Singh, one of the most eligible bachelors in the country got bowled over by his lady-love Hazel whom he married with the utmost pomp and show. Theirs was a wedding which was the true definition of a big fat Indian wedding. While Hazel looked different and mesmerising in all her wedding function looks, the most interesting part of her look was her hair. Except for both her wedding ceremonies, she chose to leave them open for all the rest of the functions. Not only did she look like a diva but she carried herself impeccably well too. And not to forget, thanks to the numerous wedding venues, she also managed to become a multi-destination wedding outfit guide.

Wedding trends aren’t just made by the outfit that the bride wore or the jewellery she donned or the wedding destination the couple chose. Sometimes, trends are born out of the simplest of things. Take for instance Shahid Kapoor’s gorgeous wife Mira Rajput. Her TV debut on Koffee With Karan got us all acquainted with her charming, witty and girl next door side. And her classy, elegant and different wedding invite that consisted of 4 honey bottles and tea bags that were specially made for the occasion along with the small little interesting elements in the wedding décor give us a peek into her exclusive taste.

Must Read: 20 Most Glamorous And Talked-About Bollywood Weddings Of The Last Two Decade

Gone are the days when the bride entered the hall with her eyes down on the floor with fear of the unknown, excitement and anticipation. Make way for Gul Panag and her out of this world swag. Giving bridal entry a new meaning, this fearless sikhni entered along with her groom on a Royal Enfield, both wearing matching aviators and dancing away to the tunes of some foot-tapping beats. Now that’s what you actually call ‘’wakhra swag ni!’’

When we talk about class, sophistication, demeanour, elegance and beauty personified, all mixed in together, isn’t Soha Ali Khan, now Kemmu amongst the top actresses on that list? Well, she sure is. Born into a royal family, this charming lady has a sense of style that is a class apart. While she looked like a living dream, a fairy-tale princess to be more precise on her wedding day, the cherry on the cake of her look was her maang tika and jhoomar worn together, blending beautifully with each other. What also caught everyone’s eyes was her minimalistic yet appropriately worn classy jewellery. We hope you are taking notes, ladies! 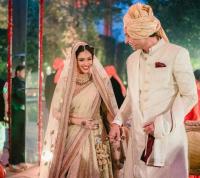 Okay, so when it comes to South Indian star Asin, we don’t even know where to begin with wedding trends. Is there something that Asin actually managed to miss out? Be it her enormous engagement ring, her wedding invite, the who’s who of tinsel town guest list, the wedding outfits, the performances, the venues and the list goes on and on; everything was a trendsetter in itself. But what was really amazing was her wedding outfit by Sabyasachi. It was actually a lehenga, which she wore with two dupattas, that looked like a saree. The ‘many styles of one outfit at one time’ was the star trend of them all. Also, she showcased how well a blend of 2 wedding styles, traditions, looks and outfits could be made, while each retained its own originality.

And talking about style and trends, how could Kareena not make it into the top 10, right? So we have just one sentence that sums up her persona on her wedding day, ‘’All hail the royal goddess!’’ Not only did she manage to wear her favourite designer Manish Malhotra’s creation in pink for her wedding, but she also wore her mother-in-law’s royal wedding outfit for their reception. She blended the best of both her worlds in style and boy she did look ravishing!

One of the much-awaited weddings of all time took place in the year 2017. We are talking about none other than the one and only Bollywood diva Anushka Sharma and dashing cricketer Virat Kohli. The lovebirds decided on forever and tied the nuptial knot on December 11, 2017, in a secret ceremony in Italy. With all the love that this wedding gathered, Anushka stole everyone’s heart with her no makeup look on her wedding day. She dared with her no makeup look and looked ravishing, courtesy her perfect features and flawless skin. 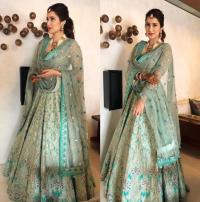 After so much of speculations and rumours, Sagarika Ghatge and Zaheer Khan finally tied the knot on November 23, 2017, in a court marriage. But the celebrations just kick-started with this as the couple had mehendi, sangeet and reception functions followed by them. The Chak De! India actress Sagarika grabbed many eye balls as she opted for offbeat colours on her wedding functions. She wore a stunning sea green lehenga by Anita Dongre for her mehendi ceremony. She completed her look with an exquisite jewellery set.

So, if your wedding is just round the corner and you are falling short of ideas to incorporate or trends to follow, we are sure this list is just what you need to become a trendsetter yourself!