Nikhil Chinapa Is Doing To Be A Dad Soon; Nikhil And Wife Pearl Host Baby Shower (Pics Inside)

Nikhil Chinapa Is Doing To Be A Dad Soon; Nikhil And Wife Pearl Host Baby Shower (Pics Inside) 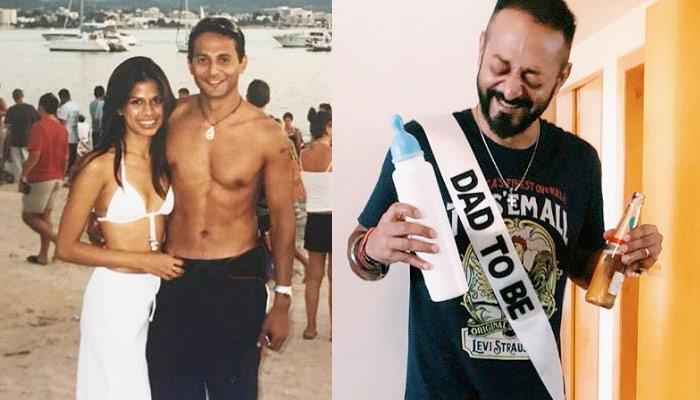 VJ and DJ Nikhil, most popularly known as Nikhil Chinapa, is a name that every 90s kid know. Not much is known about his personal life, therefore, we’ve got news for you. Nikhil is all set to become a father. Yes, Nikhil and his DJ wife, Pearl will soon embrace parenthood.

We came across the photos of Pearl’s baby shower which surfaced online. Nikhil’s good friend, Maria Goretti shared the happy news by posting pics on her Instagram handle. In the pics, we can see Nikhil and Pearl enjoying the baby shower to the fullest with a headphone and a milk bottle. Pearl is seen holding the headphones near her baby bump, gesturing the music to her baby’s ears. In fact, Nikhil and Pearl can also be seen wearing the ‘Dad To Be’ and ‘Mom To Be’ sashes. Isn’t this very sweet? Maria captioned the pics as, “You know @nikhilchinapa and @pearls.world I love you guys. Yup that’s all. #momtobe #dadtobe.” Check out these pictures:

Recently, Pearl took to her Instagram and posted a beautiful old picture with hubby, Nikhil. Captioning the pic below, she shared, “Having a baby with this beautiful man. Someday we’ll go back to this beach with our little bundle and dance the evening away as we did back then.” (Also Checkout: After Divorce, Ex-Roadies Judge Raghu Ram Has Found Love Again)

Talking about their relationship, Nikhil once said, “She’s super understanding of my constant travelling and the nature of my job, but isn’t afraid to voice concerns when I take things for granted. We talk about everything – and I mean everything. We don’t just restrict things to small talk and "work". In fact, we avoid discussing work at home.” (Also Checkout: Rannvijay Singha Shares The First Ever Pic Of His 10-Month-Old Baby And She Is So Cute)

By their own admission, they are “each other’s most honest critics.” From a report in Mid-Day, Pearl can be quoted as saying, “It's not very different from being a couple in any profession. You understand each other well but are also pulled in different directions, but that's healthy. We're each other's sounding boards and support, and also each other's best, most honest critics. We love sharing music and plans with each other. Most importantly, we understand this industry's challenges and support each other during tough times. It's quite another feeling to be able to share a moment at a club or a festival with your partner, without having to say a word. He just knows.” (Don't miss: Rannvijay And Prianka's Daughter Baby Kainaat Turns 1, Does 'Sat Sri Akal' In This Adorable Video)

In the same interview, when they were asked as to how does it unfold when they DJ alongside their life partners, Nikhil said, “We used to play a lot of gigs in the beginning and we both created our own space, without stepping on each other's toes. We're professional with each other in the console; something Pearl was particular about right from the start. At the console, she's first the DJ, then my wife. To be honest, I've always aspired to be the kind of DJ that Pearl is, and I think I've managed to up my game in the past few years.” Pearl further added, “He is too modest; he's a brilliant DJ. We still play together sometimes, but not very often.”

In another interview with the Times of India, Nikhil said that they make an offbeat couple. He remarked, “Yeah, we're both DJs, so what? I'm the messy one, she's the neat one. She likes to cook stuff in the kitchen sometimes and I like to watch TV. If we go to the office, we both go together. Sometimes, we travel a lot and don't get time, but we try to take out as much time for each other as possible.”

So, here we’re! We’re so happy for Nikhil and Pearl. May they be soon blessed with a healthy and beautiful baby.

Next Read: Sonam's New Picture With BF Anand Staring At Her Proves That They Are Madly In Love With Each Other