Indian cricket legend and IPL team Kings XI Punjab mentor Virender Sehwag has inspired many aspiring young cricketers with his commendable performances on the field. With his witty one-liners and quirky wishes for fellow cricketers, Sehwag is also one of the most popular cricketers on social media. And not only he shows his wittiness on others, but he also shares funny antidotes for the married people through his experiences as a husband and takes a joke or two on himself as well.

Virendra Sehwag married his childhood love, Aarti Ahlawat on April 22, 2004, and even after 14 years of marital bliss, their bond just gets stronger with each passing day. On April 22, 2018, Virendra and Aarti completed 14 years of togetherness and he shared a picture with his wife in which his face is smeared with cake, on Twitter. He captioned the pic as, "HA HA! Happy Anniversary @AartiSehwag!" 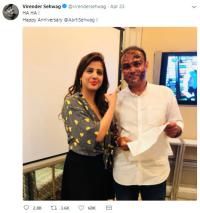 Interestingly, a day before his anniversary, Sehwag tweeted a hilarious joke on marriage and wife and in no time, he got Twitteratis going LOL-ing over his sense of humour. Implying how impossible it is for a husband to win an argument with his wife, he tweeted: “Heard this- Ek aadmi ne tootte taare ko dekhkar Biwi se bahas jeetne ki shakti maangi. Taara vapas jud gaya!” which translates to “A man once saw a falling star and immediately asked for his wish to win an argument with his wife to be granted. The star fixed itself from falling.” (Also Read: Deepika Padukone On Ranveer Singh: 'He Is A Man Who Is Not Afraid To Cry And I Love That About Him') 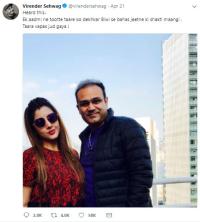 For the uninitiated ones, Sehwag met Aarti for the first time when he was 7 years old, and she was just 5 years old, and it was love at first sight for the cricketer. Yes, it was puppy love for them! Then when Sehwag turned 21, he decided to take his friendship with Aarti one-step ahead and he proposed her. After knowing each other for 14 years, Sehwag proposed and she said yes. And after dating for 3 years. Sehwag and Aarti were pronounced husband and wife. (Also Read: Kabir Khan And Mini Mathur's Mumbai Home: A Greek Abode Full Of Colours, Creativity And Crookedness) 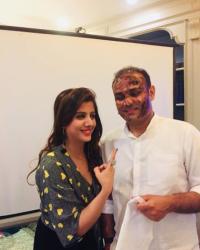 On October 31, 2017, Virender Sehwag was honoured by the Delhi and District Cricket Association (DDCA). They named the gate no. 2 of the Feroz Shah Kotla stadium, Delhi, as the 'Virender Sehwag Gate'. For the inauguration, a small ceremony was organised by the DDCA but unfortunately, Aarti couldn’t accompany her husband for the occasion. (Also Read: Varun Dhawan Reveals His Lady-Love Natasha Dalal's Reaction On 'October')

But the doting wifey made up for the moment and she tweeted some words of praises for her husband. Describing how Sehwag taught her that life is much bigger than achievements, Aarti tweeted, "He is a man who has taught me ki zindagi achievements se bahut badkar hai, but still I feel so proud of his achievements as a player and your sensitivity as a person. I am very proud of you Viru and love you deeply. So happy to see a gate named after you.” 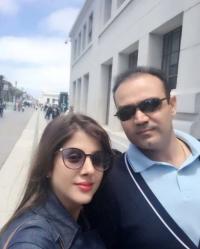 Speaking about the same, Virendra Sehwag was quoted as saying, "It's an honour to have a gate named after me at the Feroz Shah Kotla Stadium in New Delhi. I remember when I started off, I used to daily cross this gate and now it has my name. There will be many more cricketers from this state who will have stands, gates, pavilions named after them; but I am glad that I am the first one. I feel very fortunate and would like to thank the DDCA for this honour. My wife and mother are not here as they are not well. I would have loved if they were here with me today."

What do you have to say about this hilarious tweet by Virendra Sehwag and his hatke style of wishing anniversary to his wife, Aarti Sehwag? Do let us know in the comments section.

Next Read: Milind Soman And Ankita Konwar Have The Most Unique Return Gift For Their Wedding Guests 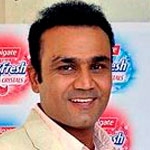