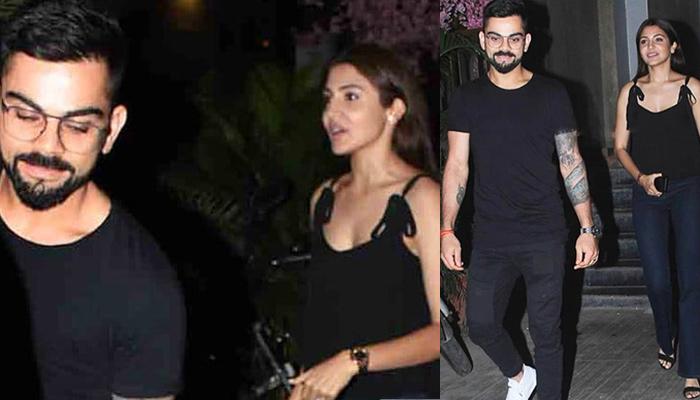 Another goal yet again! We wonder how many more kind of goals does ‘Virushka’ have in their kitty! From sharing the proud moment with hubby when he receives an award, to maintaining a work-life balance, Virat Kohli and Anushka ki jodi, is simply the best! (Also Read: Virat Kohli Says Wifey Anushka Is The Captain Off-Field, She Takes All The Right Decisions)

It was only on June 12, 2018, when Virat Kohli was conferred the ‘Best International Cricketer’ by BCCI. Anushka was all cheery for her hubby and Virat again credited all the glory in his life to his dear wifey. Upon receiving the award, he said, “My wife’s here today, so it’s more special. The Awards didn’t happen last year, but I am glad they didn’t, as she is here today.” Check out their picture:

Probably as a celebratory dinner, the couple was spotted coming out of a plush restaurant in Mumbai. The couple went to spend some ‘me-time’ with each other on the romantic date and both looked ravishing (as usual!). Both Virat and Anushka seemed to be twinning with each in their all-black avtar. While Virat donned himself in complete black, Anushka wore a cute-black strappy top with dark-blue flared denims. Here are some pictures and a video:

Anushka is back from the US after her movie with Shah Rukh Khan and Katrina Kaif, Zero’s shoot. And Virat too, got done with IPL 2018 and the two are reportedly making the most of each other’s availability and are often spotted having a blast with each other. On June 11, 2018, both Virat and Anushka posted the same pictures from their respective Instagram handles where Anushka was seen holding a bear cub-like super-cute puppy, while Virat broke into laughter. The following picture will make your bad day vanish!

Also, Virat is making the lives of all existing hubbies or hubby-to-be’s difficult, by giving major hubby-goals of crediting wifey Anushka for any win in his life! We already told you what he shared about Anushka on his big BCCL win. Even after winning the South Africa series, Virat had credited Anushka for all the perseverance and inspiration. In an interview, he shared, “People who contribute off the field they deserve a lot of credit as well. My wife who keeps me motivated deserves a lot of credit. She's been criticised a lot in the past. But she's one person who's kept me going throughout the tour."

Even before marriage, he indirectly hinted that his then girlfriend, Anushka was the motivating force behind all his wins. In Gaurav Kapur’s YouTube show, Breakfast with Champions, Virat Kohli opened up about how his life has changed after Anushka came into his life. He was quoted as saying, “Lady luck ka kamaal hai. You have seen me, you know I had no sense before. Ever since the lady has come into my life, she’s taught me a lot of things. I’ve learnt a lot, become more sensible in the last 4 years all because of her. She’s taught me how to be more patient and taught me how to utilise the position I am in to the fullest. At that time too, I never tried to be anyone else. I never tried to tell myself that I should be reading books etc… those are gradual things. If you like it, you like it. So, luckily I never tried to change myself. But the flip has been because of her.” (Checkout! Virat Kohli Shares A Workout Video With Wifey Anushka, We Can Hear Her Calling Him 'Rubbish' In It)

Virat and Anushka, we bet you know how great you look with each other! Keep looking awesome together and giving us goals of every kind!