Undoubtedly, Virushka as a couple, make for one of the sweetest pairs. The couple has time and again shared with the world, how much they are in love with each other. The sweetest thing about them is their PDA and the adorable picture as well as captions that they post for each other. (Also Read: 10 Times When Virat Kohli And Anushka Sharma Gave Us Some Serious Relationship Goals)

Only yesterday (June 10, 2018), both Anushka and Virat shared the same picture on their individual Instagram handles wherein Anushka is seen holding an adorable puppy (who almost looked like a stuffed toy) and Virat is all smiles, standing beside his wifey. Check out the picture below and shake off all your Monday blues! However, it is still unknown if the puppy is the newest addition to their family or was just a part of a cuddle-session with Anushka and Virat. Anushka already has a pet Labrador named Dude who she is very fond of and frequently posts picture with him. She has time and stated how much ‘she loves going back home to her Labrador, Dude, after a hard day’s work’. (Also Read: Met, Fell In Love But Soon Parted Ways To Only Realise That They Can't Live Without Each Other)

Coming back to the camaraderie between Anushka and Virat, need we say a word more, eh? But we still will because we can’t get over them! In case you missed, on June 7, 2018, Virat shared an ‘awwdorable’ video where he was seen gymming with Anushka and was all praises for her. He said, “So guys doing another session of strength and mobility and look who I have with me. Working out like a boss. Having fun in the gym and she’s killing it- going on and on and on. She can do more cardio than me.” A blushing Anushka replied with a “rubbish”. Check out the video below:

Anushka and Virat have reportedly taken some time off and are busy chilling with each other (which probably means you will get to see more of them via their posts *excited*!) Anushka is back from the US after a hectic shoot schedule of Zero, where she stars opposite Shah Rukh Khan and Katrina Kaif. Virat, on the other hand, was busy with IPL 2018 and is too, on a small break from work before he heads off to England in July for his cricket tour. 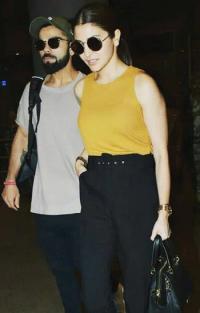 This year (2018) seems to be a great one for Anushka on professional front as she is doing great projects with the well-known of the industry. Her upcoming films, Sanju, Sui Dhaaga, Made in India and Zero are movies that everyone is looking forward to watch this year.

Next Read: From Head To Toe, This Muslim Bride Recreated Anushka's Bridal Look From 'Channa Mereya'