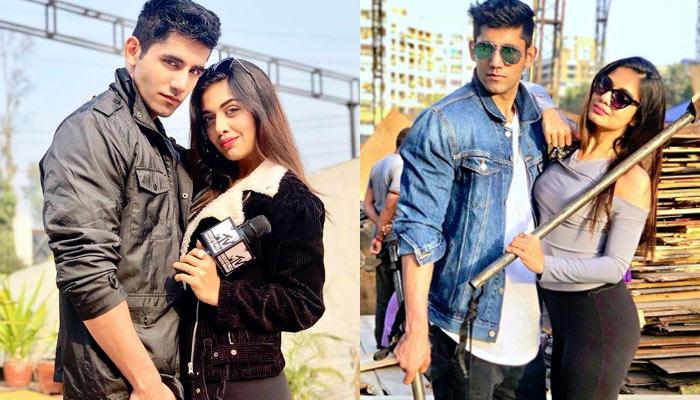 One of the famous television faces and MTV fame, Varun Sood and Divya Agarwal are very much in love. Both of them have come out of what they say “not so good” relationship with their respective exes, Benafsha Soonawalla and Priyank Sharma. And now, the two have found solace in each other! The lovebirds who are currently auditioning MTV Roadies season 16 together as judges are going strong in their personal life as well.

For the uninitiated ones, love brewed between Varun and Divya when they appeared together in Vikas Gupta's reality show, Ace of Space, of which she turned out to be the winner. Not just the trophy she brought back home, she also bagged love during the tenure of the show. They are so serious about each other that they might tie the knot soon. (You may Also Like: Deepika Padukone Shares Her Valentine's Day Plans, Ranveer Singh Will Get The Best Treat For Sure)

But before that like any other couple, Divya and Varun too have their own style of romantic Valentine’s Day 2019 plans. In an interview with the Indian Express, while talking about Divya, Varun was quoted as saying, “She knows me extremely well. So, I don’t wait for like to understand me. I don’t have to tell her things. Wo samajh jati hai. So, I think that’s the best part. And that comfort zone is there with her”. Adding to this, Divya stated, “We have always been comfortable with each other. We are not those typical couple who are calling and asking where are you? With whom are you?”.

When they were asked about ideal Valentine's plan, Divya said, “Don’t pressurise yourself to celebrate something out of the box. You can probably ignore the phone, probably switch off your phones for the entire day and just spend time with each other.” And Varun shared, “My ideal date would be a nice movie like Andaaz Apna Apna. Nicely lit bd room. Hum log night suits mein baithenge. Popcorn khayenge, nachos khayenge, movie dekhenge, and we can have a movie marathon”. Divya replied, “That’s nice”. (Also Read: Hina Khan Bakes A Lovely Star-Shaped Cake For Birthday Boy Rocky Jaiswal, Picture Inside)

When Divya was asked about the things she loves, hates and tolerates about Varun, she remarked, “I love Varun as a whole for sure. I don’t like Varun as he makes fun of me for no valid reason. Like, where I am trying to impress people around me. When I am trying to be nice. He will come up like “Hey you are wearing a foil paper” and I am like what the hell. I tolerate his poking behaviour. He keeps poking me for things”.

Confirming that they are dating each other, Divya opened up to SpotboyE, "Well, yes, we are a couple now. We are very much dating. I am glad that I am holding his hand and fighting the world. Our relationship will only get bigger and better and we plan to take it to the next level soon. It will just not stick for fun. Though we haven't discussed on all this, but I can tell you that we are serious about each other."

She also stated, "Varun and I used to share an extremely great bond, outside also. Locked inside, you are not distracted. We are alone and thinking about only our lives. And if I am holding somebody's hand after that, I am sure that it's for forever." (Checkout: 'Yeh Rishta Kya Kehlata Hai' Actor Karan Pahwa A.K.A. Anmol To Get Married In March, Details Inside)

Revealing what got them so close to each other, Divya shared, "People don't know this but before coming on this show--- Varun and I used to talk to each other for 4-5 hours in the night. I stay in Mumbai and he stays in Delhi, but we used to play 60s ke songs of Mohd Rafi and Mukesh and make each other hear them. So, we were anyway very, very close pehle se. In fact, I would say we were just misunderstanding each other by calling each other as a best friend. The feeling was much more than that, and we realised that only in the show."

Also, the ones who followed Ace of Space would know that Varun in the middle of the show got close to another contestant, Chetna Pande. Sharing if Divya used to get jealous about the same, she stated, "I am glad that this happened because if Chetna would haven't come between us, neither me nor Varun would have realised what we exactly feel for each other. We must have just ended up spending our lives giving importance to each other in the name of friendship. But her presence made us realise it's not just friendship but love which we hold for each other in our hearts. Jo hua achche ke liye hua." (Don't Miss: Kapil Sharma Reveals How Fan Gatecrashed His Wedding And Kissed Him On-Stage, This Is How He Reacted)

Adding further, she remarked, "I know. I am feeling bad that it will break a girl's heart but I myself have gone through something like this. Ek ladka mujhe bhi pasand tha aise hi kisi reality show pe and then he wasn't there with me.  But I must add here that Chetna is a very mature person. She handled it well, chahti toh meri band baja leti."

What’s your Valentines Day plans guys? Do let us know!