On October 16, 2019, Saif Ali Khan and Kareena Kapoor Khan mark their 7th wedding anniversary and for us, what else could be a better occasion to share with you an unseen picture from their fairytale 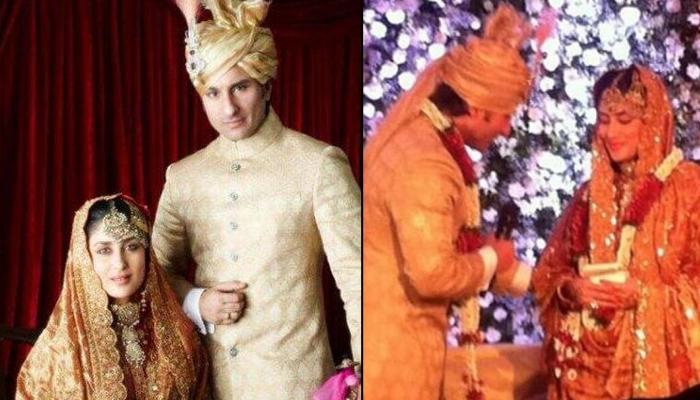 A few years before Kareena Kapoor made her debut in Bollywood, one day when Saif Ali Khan was shooting with Karisma Kapoor, he saw little Bebo sitting in front of her sister’s makeup van, with her hands folded. Saif felt that she was very beautiful. Years later when Saif was married to Amrita Singh and Kareena was a newcomer in Bollywood, they starred together in the movie, LOC Kargil but despite minimum interaction, Bebo had felt that he was a perfect gentleman. Fast forward to 2006, Kareena and Saif came together for Omkara but it was their next film together, Tashan which had proved to be a new beginning for both of them on the personal front. (Also Read: Shloka Mehta And Akash Ambani Attend School Friend's Wedding, Her Dance With Isha And Nita Is Filmy)

Little did Saif Ali Khan and Kareena Kapoor know that one day they will be greeted as ‘mister’ and ‘missus’. The royal couple of B-town, Nawab Saif and Begum Kareena have been redefining the couple goals for years now. From Saif getting inked to mark his love for Kareena with her name in Hindi on his forearm to Saifeena (as fans fondly call them) taking the celebrity wedding bar high with their royal union in 2009, Saif and Kareena have proved that inter-faith, inter-religious, inter-background and inter-anything doesn’t matter when you are in love! 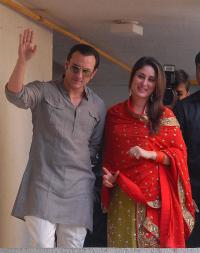 On October 16, 2019, Saif Ali Khan and Kareena Kapoor Khan mark their 7th wedding anniversary and for us, what else could be a better occasion to share with you an unseen picture from their fairytale union. With the pictures and videos of Saif and Kareena doing the rounds on social media on their seventh anniversary, we got our hands on an unseen black-and-white photo from their wedding. Neither nikaah nor saat pheres, Saif and Kareena had taken the non-conventional way and became each other’s forever by exchanging vows in a registered marriage. For the same, Kareena had opted for her mother-in-law, Sharmila Tagore’s ghaghra, which she had worn for her nikaah to Mansoor Ali Khan Pataudi. 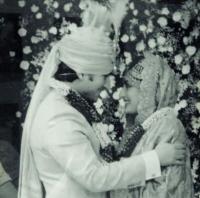 In 2017, Saif Ali Khan’s sister, Soha Ali Khan had published her first book, The Perils Of Being Moderately Famous, in which we got an unseen glimpse from his wedding with Kareena Kapoor Khan. In the unseen wedding picture, we could see Sharmila Tagore, Soha Ali Khan, Saba Ali Khan happily posing with the newly-weds, Saif Ali Khan and Kareena Kapoor Khan. Joining the perfect family picture were Saif’s kids, Sara Ali Khan and Ibrahim Ali Khan, from his first wife Amrita Singh, and they were all smiles for the camera.

In a tell-all conversation with Humans of Bombay, Kareena Kapoor Khan had narrated when she had fallen in love with the Nawab of Pataudi, Saif Ali Khan, and how his non ‘Bollywoodised' lifestyle has taught her to balance things. Bebo had stated, “I've been blessed with people who have supported me thoroughly! So just when I thought I was falling, Saif caught me. I'd met him before, but while we were filming Tashan, something changed. I wore my heart on my sleeve! He was so charming; I fell for him hook, line & sinker.” Kareena had continued, “We'd enjoy the beauty, have great conversations and just bond!” (Also Read: Mohena Kumari Singh's First Post-Wedding Look, The Newly-Married Bride Looks Resplendent In Sindoor) 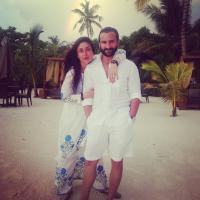 Contrary to what everyone believed (in fact still believe), Kareena Kapoor Khan doesn’t get bothered with the fact that Saif Ali Khan is 10 years older to her and has two kids. Kareena had remarked, “For me, he was just Saif–he helped me heal & love myself. Maybe it was the fact that we're so different–he's more private & not ‘Bollywoodised', but I imbibed that from him. I learnt to balance things & not let them get to me.” Revealing how Saif had once told her that he can’t keep dropping her home every day, Bebo had elaborated, “We'd been dating for awhile, when he said he's not 25 and can't keep dropping me home every night. So he told my mom, ‘I want to spend the rest of my life with her. We want to live together.'” 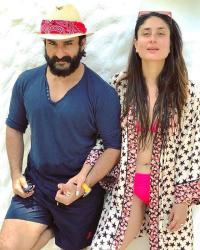 Revealing what a normal evening with hubby, Saif Ali Khan and tiny tot, Taimur Ali Khan, looks like, Kareena Kapoor Khan had shared on The Love Laugh Live Show, "I think both of us, we are very social, but we don't like to go to film parties. He doesn't want to go and watch any trial shows because he is like I can't lie, so obviously he won't go. Not too many friends in the film-film circle, even though it's quite strange because both of us are inherently film-film." 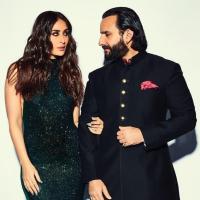 Bebo had continued, "So, an average evening is always like he is reading, lots of candles are lit. Our dinner's always early, we like to eat in early so like by 7:30 or 8. In fact 3 times a week, he will be like let's cook, let's have a bottle of wine and chat and that's our kind of catchup with Taimur running around. We are playing with him and sitting." (Also Read: Janhvi Kapoor And Ishaan Khatter Recreate Karwa Chauth Scene From 'Dilwale Dulhania Le Jayenge') 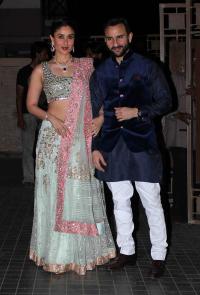 Saif Ali Khan and Kareena Kapoor Khan are now living their ‘happily ever after’ with son, Taimur Ali Khan. Sending truckloads of happiness their way on 7th wedding anniversary!