Ever since we entered the last quarter of the year, it is becoming increasingly difficult for our adrenaline rush to keep calm! With so many major ‘happy’ changes coming in the lives of our favourite celebrities, looks like this year will end on a fantastic note! With the Padukones and Bhavnanis becoming one, Jonas’ and Chopras soon-to-become one, there is another star family who are planning for two big fat weddings in this year and early next year too! (Do Read: Priyanka Chopra And Nick Jonas Are Spending Whopping 3.2 Crore On Their Jodhpur Wedding Festivities)

Any guesses as to who we are talking about? Well, we are talking about the ‘Richie Rich’ of India, Ambani’s and the latest additions to their family. While Isha Ambani and Anand Piramal are all set to tie the knot in December 2018, early 2019 will witness the super-gorgeous couple, Akash Ambani and Shloka Mehta enter the bond of holy matrimony. 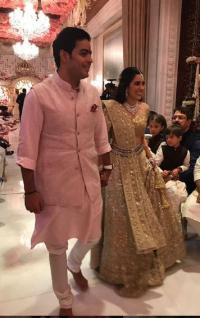 Yes, speaking about the unseen picture here, celebrity stylist, Tanvi Borkar, recently posted an unseen picture of Shloka clad in a red and ash lehenga by celebrity designer, Anamika Khanna. The soon-to-be-bride wore minimum accessories, with her hair neatly tied in a ponytail. With blushed cheeks and an almost no-makeup look, needless to say, Shloka looked ethereal! What further accentuated her look was the simple mehendi in her palms, which surely gave us a mini-glimpse of her wedding look. Also in the same backdrop, another picture was posted which witnessed the beautiful diva, donning a cream Abu Jani-Sandeep Khosla outfit, which she accessorised with green-coloured jewellery. Take a look at the pictures: 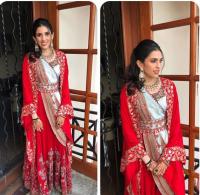 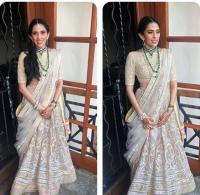 Akash and Shloka were officially engaged on June 30, 2018, wherein, we came across a couple of inside pictures from her engagement wali mehendi ceremony. Most importantly, have you seen the engagement picture of the beautiful bride-to-be? Shloka had donned a blue Anamika Khanna attire, adorned her hands with henna and wore minimum silver jewellery. Here’s a picture in case you missed: (Checkout! Janhvi Kapoor Said That She Might Look For Dates On Zomato, Their Reply Is Winning The Internet) 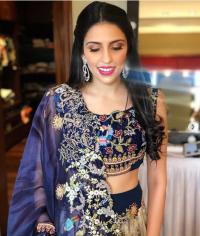 Close friend of the Ambanis, Priyanka Chopra, who was invited at the Shloka-Ambani pre-engagement party, had attended the function and posted a beautiful picture along with the caption, “Congratulations Akash and Shloka!! Such a beautiful ceremony.. mehendi hai rachne wali.. love you both. Pre pre engagement party.” Here’s the picture that PeeCee had shared: 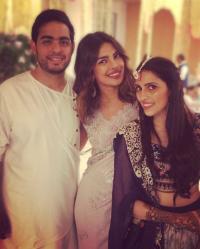 Do you know, Shloka was given a hearty welcome by her nanad, Isha Ambani? At their post-engagement bash, Isha delivered a beautiful speech for her bhabhi wherein she said, “Today is all about ‘hearts’. The theme is ‘hearts’, Shloka is ‘heart’, Akash is a ‘heart’; it’s about the greeting of hearts, meeting of hearts, and the celebration of hearts. And Anand and I are all hearts for Shloka and Akash. I don’t think our hearts could burst anymore with love and affection than it is today. And, we are just so happy to call Akash our bhai and Shloka our Bhabhi." 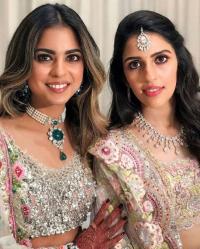 She had further stated, "Welcome to the family. But the truth is that Shloka has been a part of our family since as far as I can remember. Diya (Shloka's sister) and I were in school together, and Diya is the first best friend I ever had. And, by relation, Shloka has also been my best friend since...I don't know, I can't even remember a time in my life when I didn't know Shloka. So in many ways, this is the officialising the fact that we were sisters; born to different mothers. And I am just so happy that I finally get to call her my real sister. And, our family feels complete in a way that it never did before. So, welcome to the family." 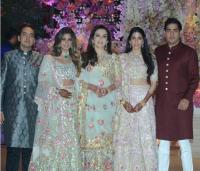 In an interview to an online portal, Shloka spoke about keeping pace with her relationship inspite of their hectic schedules. She was quoted as saying, “Despite years and busy schedules, we have always found ways to stay connected. Akash is incredibly grounded, and we share a bond based on meaning and memories. We don't just get along - we also support each other's hopes and aspirations and are determined to build a sense of purpose into our lives together. We are lucky to have a love that began with being best friends and luckier still to have such supportive families”. (Must Read: Sushmita Sen's Family Picture With Boyfriend Rohman Shawl In Frame From Her 43rd Birthday Bash) 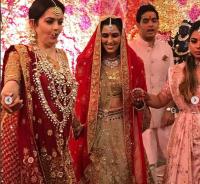 While Akash revealed, “I am truly happy that our friendship has blossomed into love and Shloka and I are getting married, she is a truly special and extremely kind-hearted person”. In another interview with a leading media portal, Nita Ambani, post-Akash and Shloka’s proposal had said, “I have known Shloka since she was four and we are all delighted to welcome her to our home and our hearts”. A source close to the family had revealed, “Shloka is a very charming girl, extremely cultured and it’s difficult to say which of the two families is lucky with this upcoming marriage”. 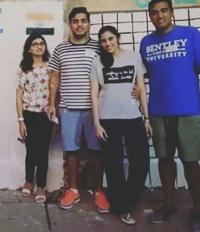 How excited are you to see Shloka in her bridal avatar? Which designer do you think she would be opting for on her wedding? Let us know in the comments section below.