Yesterday, on January 31, 2019, we got the happy news of television queen, the one who reigns the small screen behind the camera, Ekta Kapoor, became a mother, recently. For the ones who missed out on it, Ekta became a mother to a baby boy on January 27, 2019, through IVF surrogacy. This is indeed an amazing surprise not only for all of her fans but also for many of the Bollywood and television celebrities.

Happiness and joy can be seen all around the Kapoor mansion. Right from Jeetendra ji, Shobha ji and Tusshar Kapoor, everyone has gotten promoted and are super-elated to welcome the little bundle of joy into their family. As per the reports, the baby is perfectly fine and is home already. (You May Also Like: Neeti Mohan Reveals The Details Of Her Valentine Wedding With Nihar Pandya And Honeymoon Plans)

Meanwhile, Ekta’s brother Tusshar expressed his happiness on becoming a mamu and his sister becoming a mother. In a statement given to media, the Golmaal actor was quoted as saying, “I’m excited to announce the arrival of my nephew, a baby boy named Ravie Kapoor, born last week through IVF and surrogacy. Ekta has been like a mother to my son Laksshya! This marks the beginning of a new phase in her life, an exciting time of completeness and fulfilment! God bless Ravie with a life of peace, happiness & good health and my sincere thank you to all of you for the support & for showering our family with so much affection!” Not just him, here are a few celebrities and their congratulatory messages to the 43-year-old newbie mommy. Here, checkout: 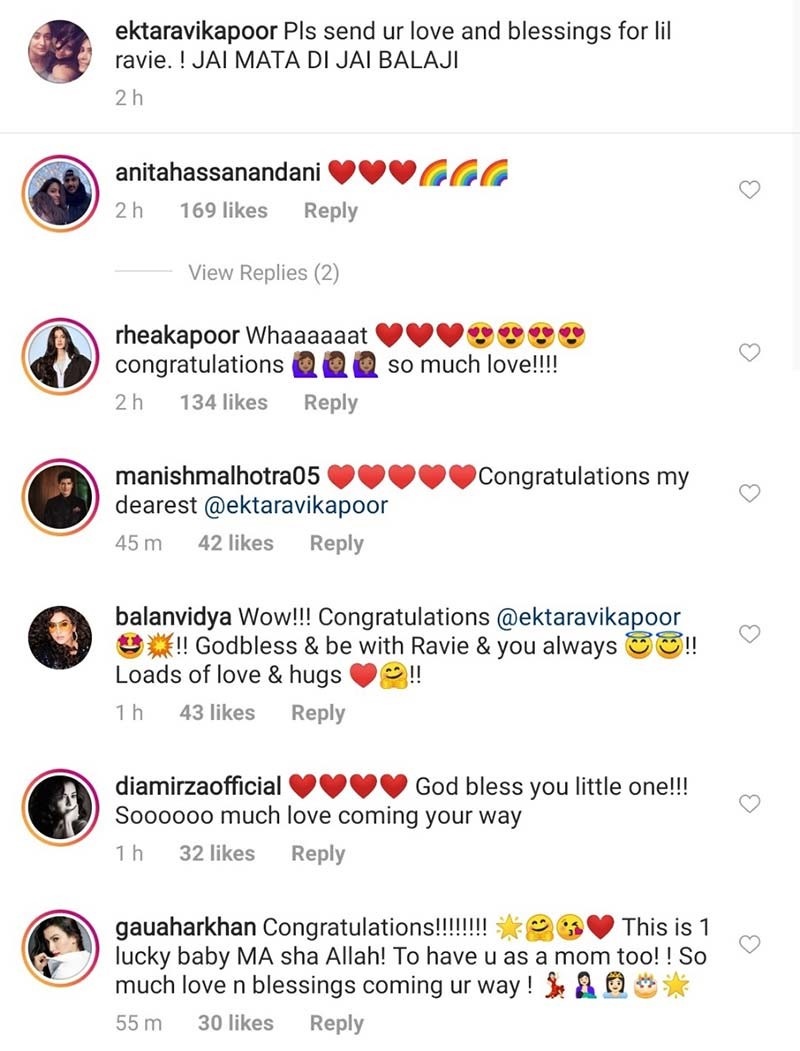 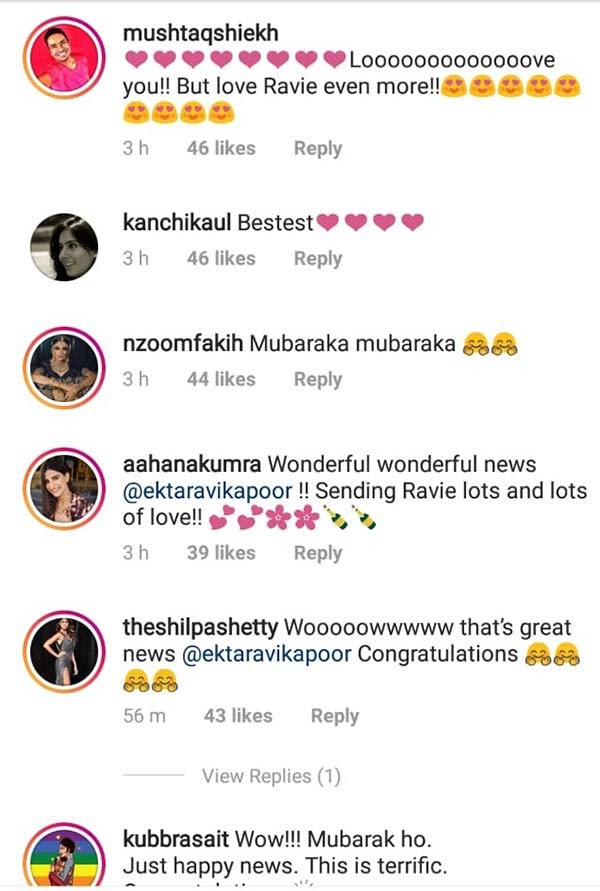 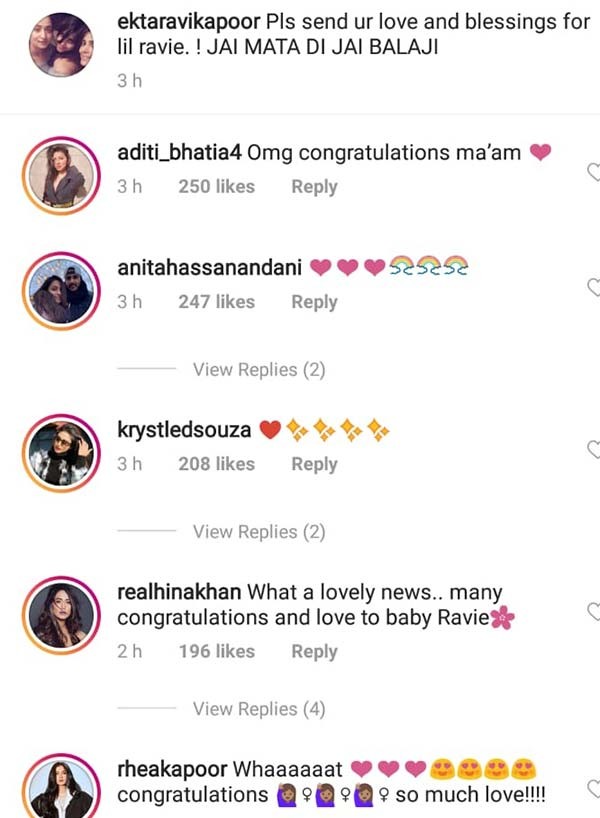 Yesterday evening, Ekta took to her official social media handles and confirmed the arrival of her baby boy. She even went on to reveal the name of the baby that she kept and it’s, Ravie Kapoor. She wrote, “By God’s grace, I have seen many successes in my life, but nothing beats the feeling of this beautiful soul being added in my world. I cannot even begin to express how happy my baby’s birth has made me. Everything in life doesn’t go the way you want it to but there are always solutions to those hiccups. I found mine and today I feel immensely blessed to become a parent. It is an emotional moment for me and my family and I can’t wait to begin this new journey of being a mother to my little bundle of joy, Ravie Kapoor.” (Checkout: Sania Mirza's Son Izhaan Mirza Malik Turns 3 Months Old, The Ace Player Celebrates It With A Cake) Soon after she shared another post, thanking the doctor who was involved in this successful procedure. Not just this, in the same post, it was revealed that the process has been going on for many years. The post had Dr. Nandita Palshetkar’s quote, which could be read as,  “Ekta came to me some years back to become a mother. We tried to help her get pregnant with multiple cycles of IUI and also multiple cycles of IVF. But we were unsuccessful. Hence, we had to take help of the technique of surrogacy which we performed nine months back at our Bloom IVF centre. Nine months later, she had achieved success with the birth of a child on Sunday.” (Also Read: Anushka Sharma And Sakshi Dhoni, Wives Of Current And Ex-Cricket Captains Were Classmates In School) 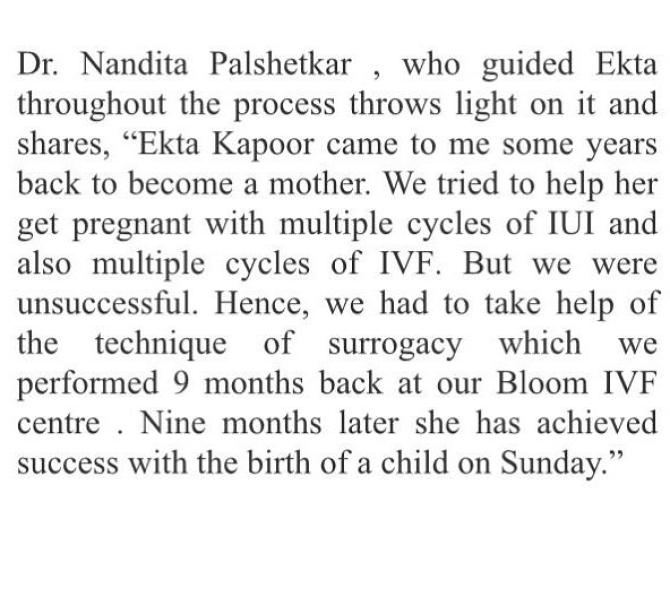 Do you know when Tusshar’s son Laksshay was born, bua Ekta was very happy? In an interview then she said, “My life has changed.” And further went on to add, “If there’s anything that’s most important in my life [now], then that’s Laksshya. Every day, he does something new and we all look forward to that. I miss him every time I’m travelling on work. you know, the Laksshya (target) of my life now is to look after Laksshya.” On becoming a mother, Ekta has earlier remarked, “My parents want me to but I don’t know if I am ready. I am too busy. So, I have huge respect for women who manage both the home and their work. It’s superb multitasking, kudos to them. At this present moment, I have to take out time for a work-out.  At 1’o clock, I am going for a walk. I need to plan my life first before I plan a child.” (Don't Miss: Sunny Leone Can't Stop Kissing Her Twin Baby Boys, Asher And Noah, It's Every Mom-Son PDA Ever)

Congratulations, Ekta and the entire Kapoor family! We are eagerly waiting to catch a glimpse of the little one soon!