Aishwarya Had Manglik Dosh, So She'd To Marry A Tree; Here Are Other Ways To Get Rid Of It

Aishwarya Had Manglik Dosh, So She'd To Marry A Tree; Here Are Other Ways To Get Rid Of It We are sure that many youngsters had not heard the term manglik before Aishwarya Rai’s marriage to Abhishek Bachchan. The tabloids and channels went abuzz back then with the news that Aishwarya (reportedly a manglik), had symbolically married a peepal tree, before tying the knot with Abhishek. All this was an astrological solution to nullify the bad luck of being manglik.

Regardless of whether Aishwarya married a tree or not back then, there has always been a hype surrounding those brides who are manglik. So, here is the truth, you need to know about being born a manglik.

Did you say 'manglik'?

First and foremost, there has never been any research and scientific proof to say that unmatched manglik couples are going to be less happy than the matched ones.

Having said that, one has to remember that astrology is based on the shastras, which have been passed from generation to generation through traditions. Many Hindus believe that if you are born under the manglik star or the mangal dosha, there will be serious problems in your married life. In fact, many Hindu priests say that you could have a divorce or even worse, your husband could die after marriage. 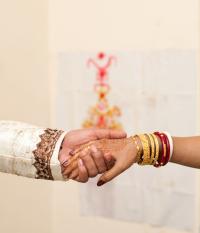 According to Vedic astrology, a person is a manglik or has active mangal dosha in his or her horoscope, if the planet Mars is placed in either 1st, 2nd, 4th, 7th, 8th or 12th house of their lunar chart. These different houses represent different aspects of life, such as contentment and mental peace (4th), marriage (7th), and long life (8th).

Mangal dosha is associated with the planet Mars. Mars represents self-esteem, temperament, ego, and strife. It is an aggressive planet. If placed in specific areas of the birth chart (kundali), you could be aggressive and violent and that could possibly lead to marital discord. That is how the manglik theory came into being.

Those who believe in mangal dosha believe that the compatibility between the prospective bride and groom is marred slightly because of the manglik effect. Whether you are a manglik or not, is determined by your horoscope. Your horoscope is based on the date, year, time and place of your birth.

With so much importance given to whether the prospective bride or groom is a manglik or not, there are quite a few false beliefs as well. Here are some of the most common ones:

1) Born on Tuesday? You are definitely a manglik!

Many people misconstrue that if you were born on a Mangalvaar (Tuesday), or a day ruled by planet Mars, you are a manglik. However, astrologically this is not true.

2) A manglik should marry a manglik only!

There is no science or rational reasoning behind this so-called 'famous' belief. This is just like Ram Gopal Verma's Sholay remake, Aag- Illogical and baseless!

3) Marry a tree and then your husband

The priests usually tell you to do this because all the alleged problems related to being a manglik are attached to the first marriage only. So, when you marry your groom, it is actually your second marriage without the supposed problems in your first marriage.

4) Either your husband or his close relative will die

This is another belief that is completely untrue. Neither your husband nor anyone close to him will die just because you are 'supposedly' a manglik.

5) The marriage will end in a divorce

The success of your marriage depends on you and your partner’s compatibility and understanding. Your being a manglik is not going to determine your marriage’s longevity.

Our Conclusion- If being 'manglik' is true then why is it restricted to Hindus only?

Well, is it not surprising that mangal dosha applies only to Hindus? Astrology is something that is based upon the relationship between astronomical phenomena and events in the human world. So, if this term exists in astrology then it should be prevalent in all the religions and sections of society. However, this is not so! It is simply restricted to only one religion.

Therefore, it is clear that the word manglik appears more connected to a religion than astrology.

Recommended Read: 7 'Phoolon Ki Chaadar' Ideas To Make The Bride's Entry A Treat For The Eyes

While Hindu priests may suggest different ways to ward off any evil associated with the mangal dosha, remember that marriage is about love and understanding of two individuals. Many marriage have failed even after all the horroscope matching rituals and astrological precautions. While, a lot of marriages have survived and continue to survive, without the partners even matching their horoscopes.