If rumours were to be believed, Sanjay Dutt had cut all ties with his daughter, Trishala Dutt. But, Maanayata and Trishala Dutt's comment on their respective pictures shows, all is well in the family. 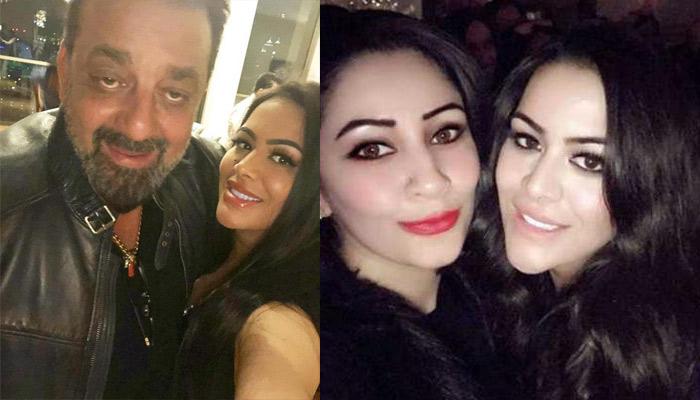 The Dutt family has always managed to be in the spotlight and caught our attention with their statements. Sanjay Dutt was earlier married to Richa Sharma, but the two got divorced in the year 1996. After his divorce from Richa Sharma, his name was linked with many ladies. All the speculations and rumours came to an end when Sanjay Dutt and Maanayata Dutt tied the knot in the year 2008. Since then, they have been living happily ever after with their twin kids, Shahraan Dutt and Iqra Dutt.

The occasion of Ganesh Chaturthi has brought lots of happiness and prosperity. The internet is flooded with pictures of Ganesh Chaturthi celebration. The B-town celebrities have been sharing the pictures from their celebrations. Like every year, the Dutt’s brought Ganpati ji to their home and are celebrating the festival with full enthusiasm. On September 1, 2019, Maanayata had taken to her Instagram handle and shared a picture of herself in a gorgeous blue saree along with Ganpati bappa. She had captioned it as “May the blessings of Shri Ganesha be with you and your family forever... may your lives be filled with love peace and happiness.” (Suggested Read: Chhavi Mittal Didn't Know She Had A Fractured Foot During Last Days Of Pregnancy, Shares After-Story) 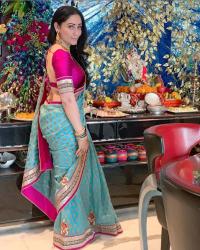 More than the lovely picture of Maanayata celebrating Ganesh Chaturthi, what caught our attention was the comment from Sanjay Dutt’s daughter, Trishala Dutt. Soon after Maanayata had posted the picture, Trishala had left a comment on her picture with blue hearts. Take a look at the comment: 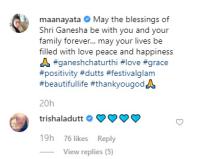 Earlier, it was rumoured that all is not well between Sanjay Dutt and his daughter, Trishala Dutt. Contrary to the rumours, all seems to be well between the Dutt family. Maanayata and Trishala have been commenting on each other’s post, putting an end to speculations about them drifting apart. On August 24, 2019, Trishala had posted a picture of herself on her Instagram handle. Maanayata couldn’t resist herself from commenting and had written, "Beauty”. Take a look at the lovely picture and comment:

On Trishala’s 30th birthday, the ardent social media user had taken to her Instagram handle to thank her lovely fans for supporting her. She had posted a picture of herself with her dog and captioned it as “#30 — thank you God for blessing me with life, for making me the happiest I’ve ever been, and for keeping me alive, happy, and most importantly, healthy. Thank you everyone for all your love, sweet comments, thoughtful texts, phone calls that made my day so special.” Maanayata Dutt had commented on Trishala Dutt's birthday post and had written, “Happy Happy to you my darling!! Wishing you the choicest of blessings my love.” (Must Read: Kashmera Shah Reveals Reason Behind Not Visiting Krushna On The Sets Of 'The Kapil Sharma Show') 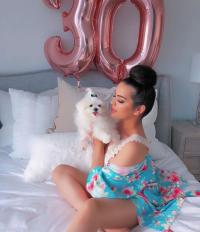 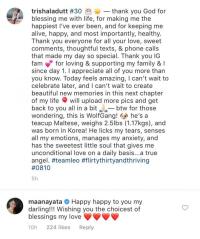 Trishala is Sanjay Dutt's daughter from his first wife, Richa Sharma. Post her mother’s demise, she has settled abroad and is living with her maternal grandparents. Trishala had once done an ‘Ask Me Anything’ session on her Instagram handle and had answered all the questions about her family. Trishala had opened up about how it feels to be Sanjay Dutt’s daughter, she had written, “Honestly, it feels normal. He's like any other father. When I'm with him, it feels like I'm with my dad. It doesn't feel any different than what you probably feel when you are with your father. I can't explain but it's...normal?" 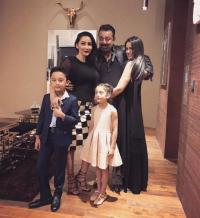 A follower had asked Trishala Dutt, whether she is more like her mom or dad, to which Trishala had replied, “My attitude and temper is like my dad. My kindness, gentleness and loving side is from my mom. My giving side and style is from both my parents.” She was further asked, “How is it living without your parents?” To which she had replied, “Umm… It’s fine, I guess. I never lived with them to begin with (I did but I was so young I don’t remember much) so I can’t really answer how it feels living without them.” (Recommended Read: Alia Bhatt And Ranbir Kapoor's Unmissable Chemistry At The Ganesh Chaturthi Celebrations In Antilia)

Everything seems to be fine in the Dutt family. What do you guys think?